Terry McAuliffe’s War on Parents: ‘I Don’t Think Parents Should Be Telling Schools What They Should Teach’ 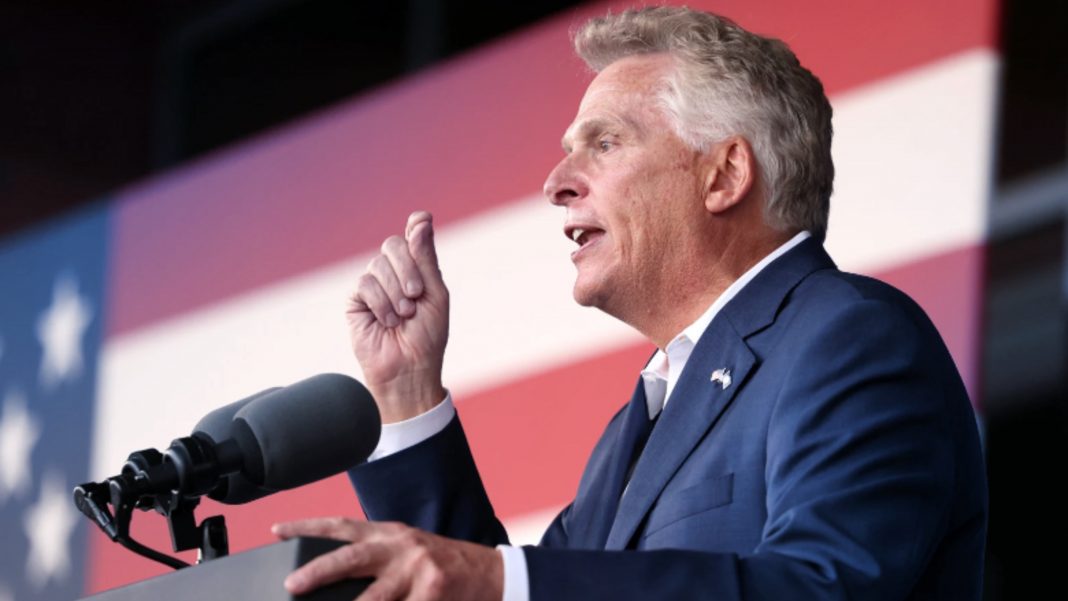 In the Virginia gubernatorial debate on Tuesday evening, Democratic candidate Terry McAuliffe insisted that parents should have no role in directing the education of their children and doubled down in a subsequent media interview.

McAuliffe, a former governor of Virginia and longtime Democratic operative, issued this pronouncement after being asked whether “protections for transgender students” should be determined at the state level or in each school district.

Responding first to the question, Republican candidate Glenn Youngkin raised the issue of “school systems refusing to engage with parents,” offering the recent example of parents in Fairfax County, Va., who were unaware of sexually explicit content in books available to children at the school library.

“You believe school systems should tell children what to do,” Youngkin said to McAuliffe. “I believe parents should be in charge of their kids’ education.”

In response, McAuliffe said, “I’m not going to let parents come into schools and actually take books out and make their own decisions,” adding, “I don’t think parents should be telling schools what they should teach.”

Asked in a subsequent interview whether parents should have buy-in on a school’s curriculum, McAuliffe doubled down: “Listen, we have a board of ed working with the local school boards to determine the curriculum for our schools. You don’t want parents coming in in every different school jurisdiction saying, ‘This is what should be taught here’ and, ‘This is what should be taught here.’”

It is understandable, given the blowback against their policies in localities around the country, that progressives want to be done with concerned parents showing up at school-board meetings and protesting CRT, transgender radicalism, and inappropriate sexual material. Worse, some of these parents are running for school boards — and winning.

Indeed, it is the beauty of our decentralized education system that they don’t have to. Locally run school systems provide parents broad access to influence how their children are taught, whether through the PTA or elected school boards.

But McAuliffe evidently isn’t enamored with the mechanisms of democratic accountability and grassroots input. Like all progressives, he has a highly inflated view of the competency and authority of government bureaucrats. And he, of course, sides with the school boards and administrators in Virginia working to cram critical race theory into classrooms, over and against parent protest.

It’s not just CRT. Just last month, the school board in Loudoun County, Va., ignoring passionate complaints from parents and teachers, enacted a permissive gender-identity policy, which allows students to use restrooms and locker rooms, as well as compete in sports, on the basis of the gender with which they identify rather than their biological sex.

These extreme policies are bad enough if enacted with parent input or over parental objections. They’d be even more egregious if the parents were shut out entirely as interlopers, as McAuliffe portrays them.

The former Texas senator Phil Gramm used to illustrate what should be the primacy of parents in education by telling the story of an educator who insisted she cared about his kids as much as he did. Gramm’s rejoinder was, “Okay: What are their names?”

Now, Terry McAuliffe has a comeback for Gramm and all parents who think like him — shut up and fall into line.

Ken Ham, in his article “Who ‘Owns’ Children?” wrote:

Who “owns” the children—parents or the government? In our day and age, many involved in western government believe it’s the government that owns kids. Many believe they know what is best for children and think they should get to dictate what children learn—and parents are just in the way of accomplishing the state’s goals. And that shouldn’t surprise us because how you answer the question of “Who owns the children?” depends on your starting point and the worldview you build that’s based on that starting point.

If you reject God and his Word, then anything goes—there’s no absolute standard on which to base your thinking. In this view, children are just biological machines, the product of millions of years of evolution. They aren’t given to parents—they are just a “choice” parents made.

You see, the family unit didn’t evolve. God created the family when he created marriage (Genesis 1:27 and 2:24) and told the first couple to be fruitful and multiply (Genesis 1:28). He entrusted children to parents to raise them in accord with the principles he has laid down for us in his Word (e.g., Psalm 127:3).

And we must remember: the most important part of education is the spiritual upbringing of children, as that affects their eternity:

Ephesians 3:8 KJV – “Unto me, who am less than the least of all saints, is this grace given, that I should preach among the Gentiles the unsearchable riches of Christ;”

Parents—take this responsibility seriously! God has given you a big job, and there’s no job more important than discipling your children in the Lord. If you aren’t thoughtfully and purposefully parenting in the Lord, I urge you and your spouse to sit down and discuss your “game plan” as a family for how you can be purposeful about this job with an eternal impact. As our world gets darker, it’s more vital than ever that you and your spouse be purposeful in how you raise your children.