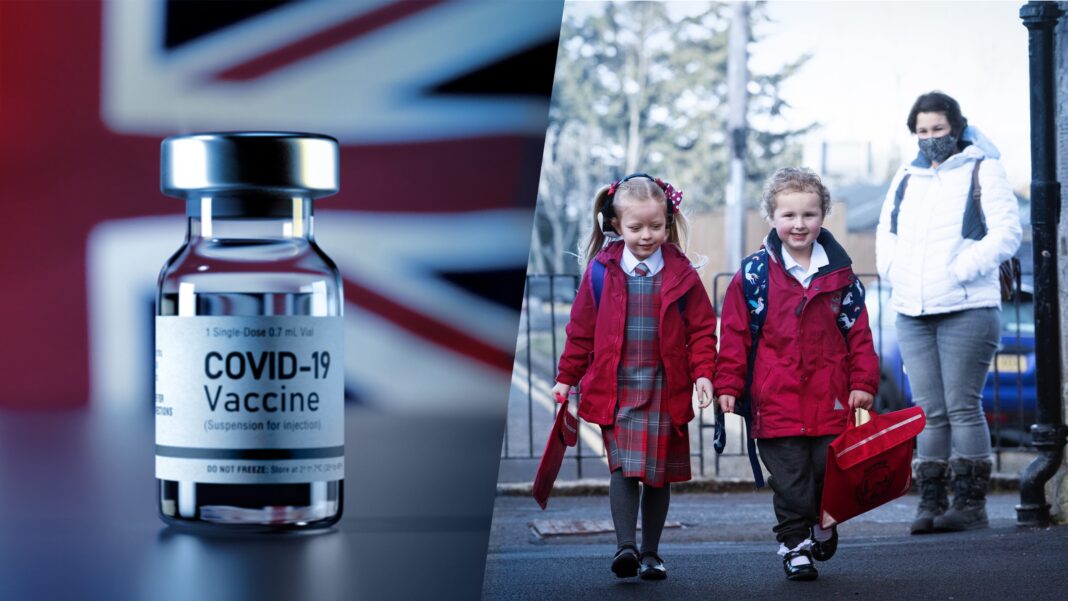 The British government has embarked on a pressure campaign to make parents get their children vaccinated or potentially risk losing the ability for their kids to attend school in person.

While the Boris Johnson administration has not mandated coronavirus vaccines for children, Health Secretary Sajid Javid and Education Secretary Nahdhim Zahawi have written to parents warning their children might be prevented from face-to-face lessons.

The letter said that parents should encourage their children to “come forward for the Covid-19 vaccine”, as it is “one of the best things young people can do” to ensure the protection of themselves and others, according to The Telegraph.

Though the government ministers acknowledged in their letter that young children face limited risk from the Chinese virus, they still should get the jab in order to “reduce the spread” of COVID-19.

“That is why we are encouraging you all to support your children to get vaccinated and to continue to test regularly. This will help to detect cases early, reduce spread, and keep students in education.”

“We know that students have missed a lot of time in school and college since the pandemic started, and that there is no substitute for face-to-face learning,” the letter said, adding that the government needs the help of parents encouraging vaccination in order to keep schools open to all.

“Keeping students in the classroom in the coming months is therefore a Government priority, both for their immediate and longer-term wellbeing.”

The pressure campaign seemingly comes in direct contradiction to proclamations made by Zahawi, who said last month that there should be “no stigma” around children refusing to get the vaccine.

Despite the government’s own Joint Committee on Vaccination and Immunisation (JCVI) not recommending vaccinations for children on health grounds, the government decided to go forward with rolling out the jab to children over the age of twelve regardless.

The JCVI said that while the benefits of vaccinating healthy children were “marginally greater” than the potential risks from the vaccine itself, it left the decision up to the government to make the decision as it was not in the committee’s “remit” to make socio-political calculations such as the benefits to education that a child jab campaign might bring.

So far, the child vax campaign has seen relatively low adoption, with only 11.6 per cent of children between the ages of 12-15 having been vaccinated in England.

Education unions have welcomed the pressure campaign from the government, however, and some have called on the state to ramp up rollout efforts to get more jabs in the arms of children.

The general secretary of school leaders’ union (NAHT), Paul Whiteman, said: “The vaccination programme is proceeding slowly in secondary schools. It is important that parents and young people are offered the vaccine as quickly as possible so that they can make their decision about whether to take it.”

Others have warned that the programme could lead to a breakdown in social cohesion, with some Tory MPs predicting that it will “pit parents against parents” and lead to children being guilted into taking the vaccine.

Sir Iain Duncan Smith, the former leader of the Conservative Party, predicted last month that “it will lead to disputes in families and real problems about children’s mental health in the opposite direction, as they are put under pressure.”

It is especially concerning when we consider the unknown variable of long-term side effects on youth, who are overwhelmingly not placed at risk by COVID infections.

The choice belongs to informed parents whether the risk of having their child receive the vaccine outweighs the benefits.

A study out of the University of California shows that teenaged boys are six times more likely to develop heart problems from COVID vaccination than to be hospitalized from the virus itself.

Another study out of Israel revealed that those with natural immunity from previously being infected with COVID-19 have 27 times more protection from the virus than those vaccinated.

Recently, several top physicians and experts—including a leading researcher for Johnson & Johnson—in an FDA meeting on booster shots warned that vaccines “kill more people than they save.” They further urged that the vaccinations are what pose a “clear and present danger” of creating new COVID variants, not the unvaccinated.

It is not acceptable for parents’ decisions regarding medical treatments for their children to be questioned, pressured, or harassed by schools or governments.

Control is the operative term in consideration of the drive toward vaccination, the likes of which has never been seen, planet-wide. Whether the vaccines are a justifiable means of controlling the virus or its variants is open to considerable conjecture. Time will perhaps tell if they are what they are claimed by CDC and others to be. –Or whether they are a means of bringing down populations –a claim that, while I don’t wholeheartedly accept, should, in my view, be granted some degree of credence.