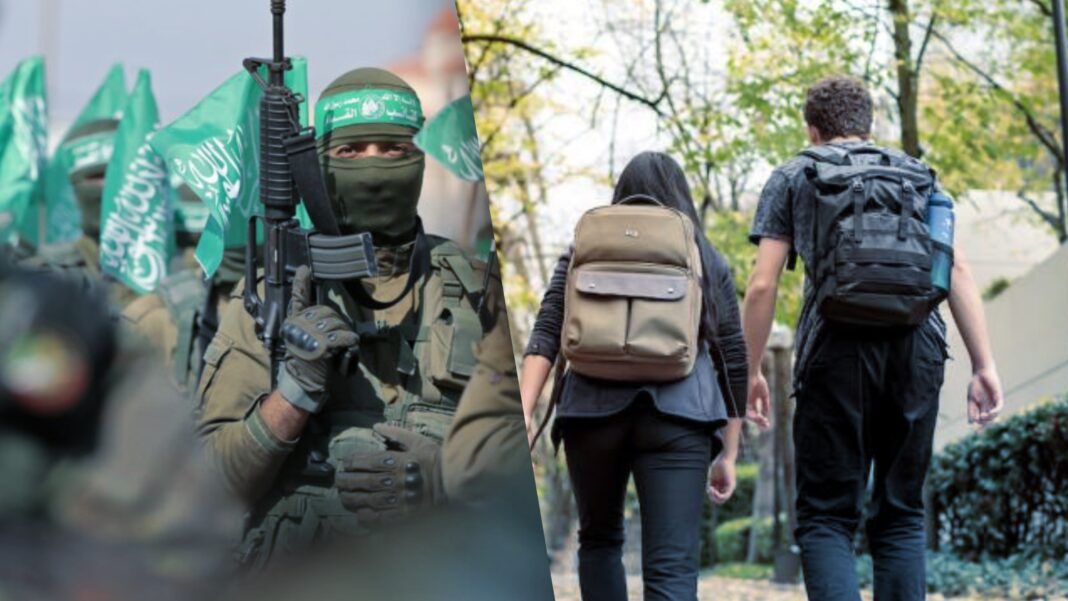 In a viral clip published this week, documentary filmmaker Ami Horowitz approached students in Portland, Oregon, and managed to garner funds to support the Hamas terror organization despite openly presenting the group as determined to destroy Israel and kill Jews.

Horowitz spoke to some of the students, and many expressed their support for Hamas and terror operations against the Jewish state.

The radical U.S.-designated Islamic terror group, whose charter calls openly for the murder of Jews, launched over 4,000 terror rockets at Israel from the Hamas-ruled Gaza Strip over a period of 11 days this month.

In a tweet sharing footage of the campus stunt, Horowitz wrote:

The clip, which has nearly 100,000 views on Twitter and more than 190,000 on YouTube, begins with Horowitz approaching student passersby and presenting his cause.

“Hi, we’re raising money for American Friends for Hamas,” he begins, claiming to work for a non-existent group that supports the Gaza-based terror group. “We’re raising money to do what you know we do as Hamas.”

To the students, he describes Hamas as a new and improved terror group.

“We’re not your father’s terrorist organization,” he says. “We’ve kind of evolved beyond that. Still kind of what we do, but we’ve kind of rebuilt and rebranded ourselves and Hamas is where it’s at.”

Horowitz also explains the goals he seeks to achieve by funding the Hamas terror group.

“We just want to get rid of Israel — it’s for the Palestinians,” he tells another student. “We’re looking to destroy Israel.”

“We don’t want just Gaza, we want to have all of Israel,” he tells yet another student.

At one point, he clarifies the violent intentions of Hamas, though it does little to deter students he approached.

“We want to fund operations against Israel and the type of attacks we’re talking about are cafes and schools, and, you know, soft targets,” he says.

“Hospitals, shopping malls and schools and places of worship,” he adds. “This is the kind of stuff we’re talking about.”

Expressing the need to “fight back against the oppressors,” Horowitz also tells students that “suicide bombers are all we’ve got.”

Students expressed their support and wished him “good luck,” with one praising him for doing what’s right.

“I’ve actually been learning in this last school year about everything that’s going on over there,” a student said, “so I like the sound of what you’re doing. It sounds like the right thing to do.”

“I’m totally against the Israeli genocide,” another student replied.

When he asks passing students if they wish to donate to “help the cause to fight back,” many respond positively, offering five, ten, and twenty dollars each to support Hamas.

“Let’s say 27 dollars,” one student says, “since that seems to be my Bernie donation.”

The shocking interactions were met with outrage online.

“Shows how powerful ‘being there’ is and, sadly, how stupid you can be and still get into a college in Portland, evidently,” wrote congressional candidate Jerrod Sessler.

“Dumb College Students are giving $10 – $15 each to help wipe Israel off the map by use off suicide bombers on civilians,” wrote Yossi Gestetner, co-founder of the Orthodox Jewish Public Affairs Council.

“Amazing what propagandized zombies do,” he added.

“Watch this & tell me anti-Zionism isn’t antisemitism,” wrote one Twitter user. “These students are stupid & ignorant but this is what happens when it’s drummed into you for years that Israel is a genocidal apartheid settler colonialist state.”

“The woke are so woke they happily contribute to fund suicide bombers to blow up hospitals, schools and cafes,” wrote another Twitter user.

A surge in antisemitic acts has been seen this past month amid Israel’s conflict with Hamas, disinformation spreading on social media seen as a major cause, according to the Secure Community Network.

As a result, Aaron Keyak, the Jewish Engagement Director at Biden for President, toldJews to hide their Judaism publicly.

“if you fear for your life or physical safety take off your kippah (head covering) and hide your magen david (star of David),” he wrote on Friday.

In a letter published on Thursday, more than 70 Harvard faculty members decried the U.S. and Israel’s “criminalization” of the Palestinians’ “right to resist” and called on the Biden administration to end support for “Israel’s apartheid regime, condemn Israeli state aggression, and affirm our support for the Palestinian liberation struggle.”

Meanwhile, Academy Award-winning actor Jon Voight posted a scathing video on Sunday, blasting liberals for attacking Israel and Jews and demanding that people not be “fooled” while warning that antisemites will “pay the price.”

During an appearance on Fox News Channel’s Hannity on Tuesday, conservative talker Mark Levin blasted President Joe Biden for the proliferation of antisemitism that he alleged was coming from the left and elected Democrats.

On Tuesday, House Minority Leader Kevin McCarthy (R-CA) and Rep. David Kustoff (R-TN) introduced a bill that aims to target antisemitic hate crimes as a rise in attacks on Jews follows a bloody conflict launched by Hamas against Israel.

Schools, in general, have become hubs of liberal and secular propaganda targeted to alter the morals of young minds. There is no level of schooling more brazen regarding this than colleges and universities.

One can speculate that this is at least in part due to modern parent’s tendency to abandon their posts after the high school level. It is the window of time between parental protection and common sense maturity that is so utterly exploited.

Numerous reports and videos are exposing just how radical, and overtly secular these schools really are.

Dividing critical race theory, bias against God’s chosen people (Israel), Marxism, the warping of God’s design for sex and gender, and much more are all being taught. As a result, students turn into adults that are predisposed against the God of the Bible.

As Christians, we understand from the Bible that the “battle” for the young mind seen here is spiritual in nature (Ephesians 6:11-24).

In a interview last fall, former governor of Arkansas, Mike Huckabee, spoke out against the anti-Israel and anti-biblical bias being taught in colleges and universities, urging people to recognize that this “is a battle between good and evil”:

To counter the bias emanating from college campuses, Huckabee encourages Christian parents to take their children to Israel and to refuse to subsidize an education that could subvert their faith.

“What has taken place in American academia was a gradual and now a rushing shift to the far left,” Huckabee continued. “Supporting the BDS [boycott, divestment, sanctions] Movement. Supporting the more radical notions that Israel is an apartheid state. And one of the reasons that I want to take people to Israel is to let them see for themselves. I don’t try to indoctrinate them. I simply say, ‘Look around for yourself and see what you see and go back home and tell people what you actually saw.’”

“But I worry because young people are being pressured to believe something that simply isn’t true,” he added. “In the same way, they’re being pressured to see America as a terrible place and evil and filled with systemic racism and awful history. The same thing is happening to Israel.”

“This is a spiritual battle,” Huckabee insisted. “I believe that with all my heart. This is a battle between good and evil. If you can indoctrinate young people – whether it’s about America or about Israel, and tell them that something that is good is really evil and something that is light is truly darkness – then you have destroyed their hope, their freedom….You’ve destroyed the biblical foundation and the spiritual foundation that both of these nations are founded upon.”

“That is frightening to me,” he concluded.