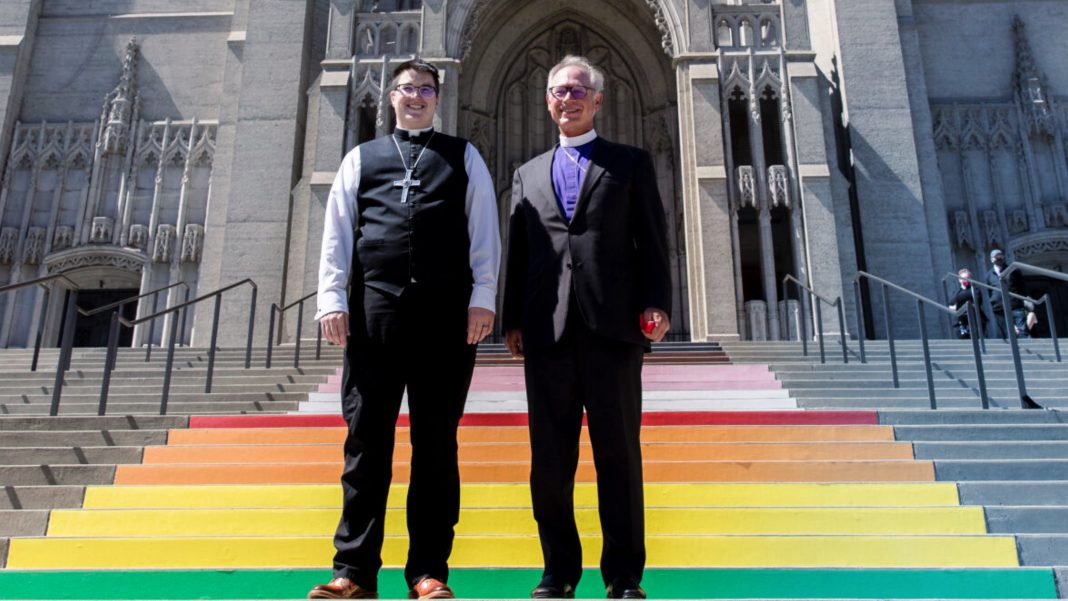 Christian leaders in the United States are rebuking the Evangelical Lutheran Church after the denomination approved the installation of its first “transgender” bishop in San Francisco.

The move was widely condemned, with many Christians calling it a complete rejection of God’s Word and design.

This development by the ELCA is no surprise considering the denomination’s history of compromising Scripture on LGBT-related issues. Daily Wire, reported:

Rohrer was barred from serving in the church’s leadership positions in the mid-2000s due to what Rohrer’s bio described as “policies against gay, lesbian, bisexual, transgender and queer individuals.” The church had only allowed gay and lesbian people into the ordained ministry if they remained celibate. In 2009, however, the church reversed course and voted to open the ministry to gay and lesbian people living in committed relationships.

The Associated Press reported, “Rohrer became one of seven LGBTQ pastors accepted by the progressive Evangelical Lutheran church in 2010 after it allowed ordination of pastors in same-sex relationships.”

Franklin Graham, in response to the Lutheran church’s decision, stated that it grieved him that any “church” would take steps against God and rebel against His standards.

“I’m not a Lutheran,” he stated, “but it grieves me to see any church taking steps that are against the teachings of the Word of God.”

“The Evangelical Lutheran Church installed their first transgender bishop in San Francisco this week. The media says that this bishop is a biological female, has a wife and children, and wants to be referred to using the pronouns they or he,” Graham explained. “The bishop was one of seven LGBTQ pastors accepted by the progressive Evangelical Lutheran Church in 2010 after it first allowed ordination of pastors in same-sex relationships.”

“This is rebellion against God and His Word and His standards—it is sin. God created us and loves us and defines what sin is, not us. The Bible says, ‘He created them male and female…’ (Genesis 5:2),” he urged.

David Closson, of the Family Research Council, told Fox News that this “church” has made itself into a “new religion” that cannot be considered Christian.

“The ELCA isn’t just trying to preach the old gospel with a new bishop. It’s a new religion,” he warned. “It’s a new religion that is trying to inhabit the space of traditional Christianity, trying to claim the titles, to claim ownership of the buildings, and to take ownership of the institutions while representing a religion that is at virtually every point contradictory to biblical Christianity.”

“The gospel of Jesus Christ in biblical terms is left far behind,” Closson urged.

“God did not create androgynous beings; He created two complementary, biologically, and genetically sexed individuals. God built the complementarity of the sexes into the very fabric of creation,” he continued. “Encouraging, promoting, and celebrating transgenderism through the promotion of a transgender clergy represents just the latest step away from biblical orthodoxy for a denomination that long ago stopped caring what the Bible teaches on moral and ethical matters.”

Sadly we have witnessed many churches alter the unchanging Word of God to better accommodate the views of our secular and immoral culture.

The Bible is not silent on the issue of apostasy within the church. We read that in the time prior to Jesus Return people would amass to themselves teachers which will tell the culture what it wants to hear rather than Biblical Truth.

1 Timothy 4:1-2 KJV – “Now the Spirit speaketh expressly, that in the latter times some shall depart from the faith, giving heed to seducing spirits, and doctrines of devils; Speaking lies in hypocrisy; having their conscience seared with a hot iron;”

Ken Ham, Founder and CEO of Answers In Genesis, simply called the move by the ELCA “an abomination” referencing an eye-opening verse in the Book of Proverbs which reads:

Proverbs 17:15 KJV – “He that justifieth the wicked, and he that condemneth the just, even they both are abomination to the LORD.”

It is also worth noting compromise is vast throughout the ELCA on multiple issues.

For example, the “church” has condemned Israel, calling the country an “occupation” of Palestinian land. This anti-semitic teaching runs contrary to Scripture and specifically ignores the prophesied and miraculous regathering and reestablishment of modern Israel by God (see: Ezekiel 36-37).

On the LGBT issue, God’s Word teaches that anyone who practices homosexuality without repentance of the sin and salvation through Jesus Christ, will “not inherit the kingdom of God” (1 Corinthians 6:9-11). What can you say about a “church,” whose leadership is, Biblically, hell-bound?

Here are some verses to consider:

Matthew 24:3-4, 11-12 KJV – And as he sat upon the mount of Olives, the disciples came unto him privately, saying, Tell us, when shall these things be? and what shall be the sign of thy coming, and of the end of the world? And Jesus answered and said unto them, Take heed that no man deceive you…. many false prophets shall rise, and shall deceive many. And because iniquity shall abound, the love of many shall wax cold.”

Romans 1:26-28, 32 KJV – “For this cause God gave them up unto vile affections: for even their women did change the natural use into that which is against nature: And likewise also the men, leaving the natural use of the woman, burned in their lust one toward another; men with men working that which is unseemly, and receiving in themselves that recompence of their error which was meet. And even as they did not like to retain God in their knowledge, God gave them over to a reprobate mind, to do those things which are not convenient;… Who knowing the judgment of God, that they which commit such things are worthy of death, not only do the same, but have pleasure in them that do them.”