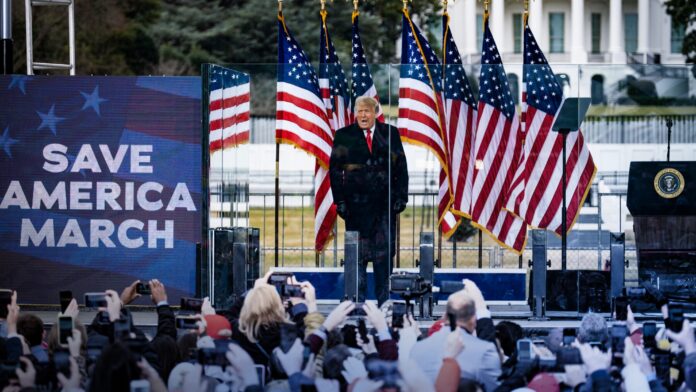 Congress was breached! Who is to blame? According to the media, the blame should be laid directly at President Trump’s feet and his son, Donald Trump Jr., who spoke to supporters before the incident. But upon examination of the addresses, after the fact, it is clear that such claims are, as usual, entirely false and twisted.

Donald Trump Jr., who has come under fire for supposedly inciting the breach of congress, actually opened his speech by commending those that attended for assembling without violence or destruction, unlike democrat protests over the past year:

“Hey guys, you actually all did something I didn’t realize was possible. I’m looking at the crowd here, and the tens of thousands, probably a hundred thousand plus, people here, and you did it all without burning down buildings. You did it without ripping down churches, without looting. I didn’t know that that was possible. According to the media, when you have a large gathering of peaceful protesters, they’re supposed to burn it all down. See, guys, we can do it right!”

Does that sound like a promotion of violence? It is interesting that so many videos of Don. Jr.’s speech removes the beginning, which clarifies that violence was unacceptable and unexpected right out of the gate.

The President, as well, did not stoke violence in his speech to supporters. He did not encourage storming Congress to halt the vote. In fact, the exact opposite was expressed:

“We’re going to walk down to the capitol, and we’re going to cheer on our brave senators and congressmen and women, and we’re probably not going to be cheering so much for some of them because you’ll never take back our country with weakness. You have to show strength, and you have to be strong. We have come to demand that Congress do the right thing and only count the electors who have been lawfully slated. I know that everyone here will soon be marching over to the capitol building to peacefully and patriotically make your voices heard.”

Nancy Pelosi and other democrats are now seeking to impeach the President for his speech on Wednesday.

“It is the hope of Members that the President will immediately resign,” Pelosi said Friday. “But if he does not, I have instructed the Rules Committee to be prepared to move forward with Congressman Jamie Raskin’s 25th Amendment legislation and a motion for impeachment. Accordingly, the House will preserve every option – including the 25th Amendment, a motion to impeach or a privileged resolution for impeachment.”

Trump was removed from Twitter entirely Friday as well for his calls for peace during Wednesday’s deadly incited, the platform claiming that such calls from the President were, much like his speech, again promoting “violence.” See a pattern here?

We highly recommend the re-watching of the addresses of both Don. Jr and the President, so you can be fully assured and ready to give an answer when people continue to disseminate this lie.