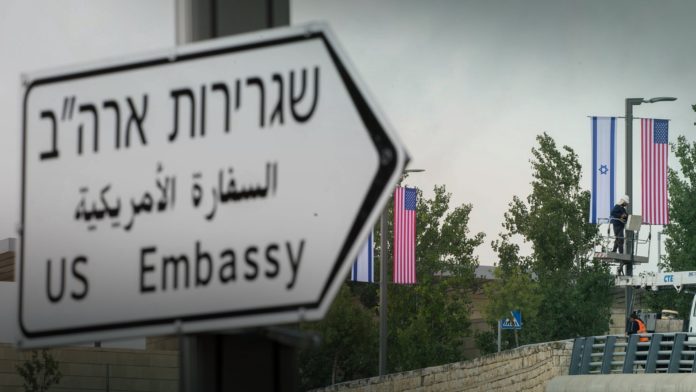 The US Embassy in Jerusalem issued a security alert on Monday, warning its citizens of a possible missile attack on Israel.

“Heightened tension in the Middle East may result in security risks to US citizens abroad,” the embassy said in a press release. “Out of an abundance of caution, the Embassy strongly encourages US citizens to remain vigilant and take appropriate steps to increase their security awareness, as security incidents, including rocket fire, often take place without warning.”

Two days prior, the Canadian Embassy in Tel Aviv issued a travel warning for the region, saying the “security situation could worsen with little warning.” It called on its citizens to “exercise caution.”

US intelligence is currently assessing whether Iran is preparing a retaliatory attack as a response to the assassination of IRGC Quds force commander Qasem Soleimani. According to CNN, there are indications that Iran has ramped up the readiness of its short and medium rage ballistic missile force in the country.

Iranian President Hassan Rouhani said on Monday nobody should threaten his nation, responding to a tweet from US President Donald Trump in which he threatened to strike 52 sites in Iran.

“Those who refer to the number 52 should also remember the number 290. #IR655,” Rouhani tweeted, referring to the 1988 shooting down of an Iranian airline by a US warship in which 290 were killed. “Never threaten the Iranian nation.”

Hezbollah-affeliated media site Al-Manar reported Saturday that an American response to an Iranian retaliation would lead to the Islamic Republic launching a strike on Tel Aviv and Israel’s northern port city Haifa. Israel’s natural gas facilities and power stations are also within the republic’s missile range.

Lebanese newspaper Al-Akhbar reported that Hezbollah head Hassan Nasrallah declared the “Great Liberation War” against the US, saying that “American soldiers will return to the US in coffins.”

“I declare that all US military bases and battleships, as well as every US officer and soldier on our land and in our region are legitimate targets to respond to the assassination crime,” Nasrallah said. “It is the US army that killed [Soleimani], and it will pay the price.”

Since Soleimani’s assassination, US forces and Iranian-backed militias traded blows in Baghdad, with multiple katyusha rockets being fired toward the city’s heavily fortified Green Zone housing government buildings and foreign missions, as well as the US embassy in Iraqi capital.