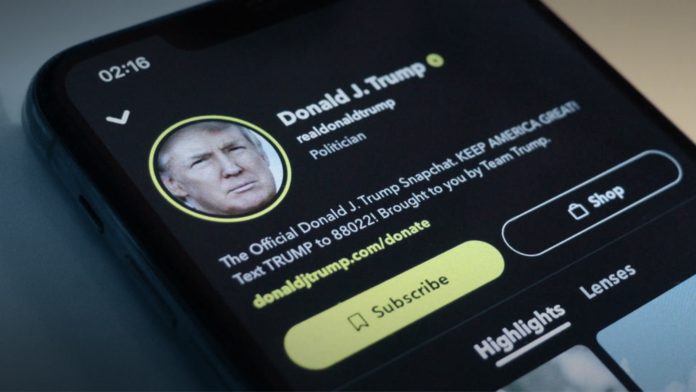 President Donald Trump’s re-election campaign lashed out at Snapchat on Wednesday after the social media company announced it will not promote the president’s content.

“We are not currently promoting the President’s content on Snapchat’s Discover platform. We will not amplify voices who incite racial violence and injustice by giving them free promotion on Discover,” Rachel Racusen, a spokeswoman for Snapchat’s parent company, said in a statement to The Wrap on Wednesday.

“Racial violence and injustice have no place in our society, and we stand together with all who seek peace, love, equality, and justice in America,” Racusen said.

“Radical Snapchat CEO Evan Spiegel would rather promote extreme left riot videos and encourage their users to destroy America than share the positive words of unity, justice, and law and order from our President,” Parscale said.

The Trump campaign did not provide examples of Snapchat’s promotion of riot videos, but campaign spokesman Tim Murtaugh told the Daily Caller News Foundation that Parscale’s claims are “self-evident from looking at Snapchat and their content.”

Snapchat CEO Evan Spiegel wrote in a memo to company staff on Sunday that “we simply cannot promote accounts in America that are linked to people who incite racial violence, whether they do so on or off our platform.”

Snapchat’s move came after Trump signed an executive order in May calling for Twitter and other major social media platforms to lose their protection from legal liability if they engage in censorship.

Twitter placed a fact-check label on a May 26 Trump tweet in which he alleged that mail-in ballots would lead to massive voter fraud.

Twitter also partially concealed a May 29 Trump tweet in which the president said the “THUGS” rioting in Minneapolis are “dishonoring the memory of George Floyd,” a black man who died after a police officer knelt on his neck for several minutes.

Trump routinely addresses what he believes is big tech bias. His administration orchestrated a White House social media summit in 2019, inviting many popular conservative social media figures to discuss ways in which big tech companies are supposedly harassing them.