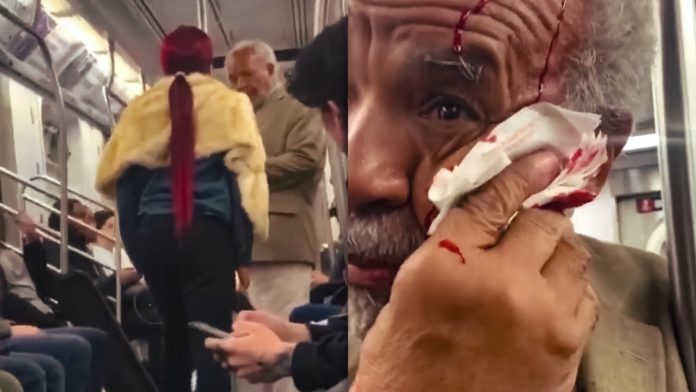 A 79-year-old man preaching from the Bible on a subway was left beaten and bloodied by a transgender ‘woman’ who allegedly attacked him with a high heel shoe.

The violent attack was captured on video by riders on board a southbound 2-train nearing Times Square on Oct. 24.

Police sources tell CBS2 the unidentified attacker walked up and confronted the elderly rider, began to scream and curse at the man, and then took a spiked stiletto heel and assaulted the 79-year-old.

The attack was so brutal it left the man with a gash in his head that took 30 stitches to close the wound. The 79-year-old man was left a bloody mess as fellow riders sat and watched the attack.

“He didn’t say anything to hurt anyone, he wasn’t even loud, you could barely hear him talk but this is what he got in return,” said a Instagram, who recorded the vicious assault and injuries suffered by the 79-year-old.

The person reportedly fled the subway after bloodying her victim and police are still looking for the attacker.

The injured rider was taken to NYU Hospital for treatment and later released.

I can’t believe no one stepped in to help this 79-year-old man while he was being attacked! It was all caught on video. He was just reading out loud from his Bible on a subway train near Times Square and was attacked by a very angry woman, identified by witnesses as a transgender woman (man), who cursed him and struck him in the head with the heel of a stiletto.

Some passengers did attend to the elderly man afterwards—he was left dazed and bleeding, and his head took 30 stitches at the hospital. I hope that law enforcement will find and bring this person to justice. Jesus told us, “If the world hates you, know that it has hated me before it hated you” (John 15:18).