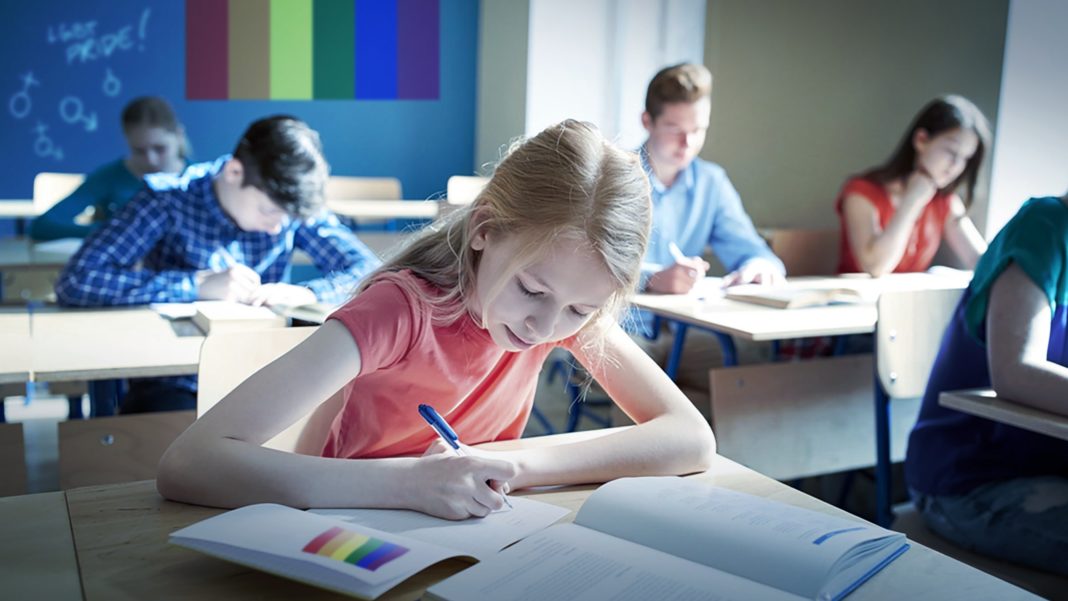 A California school district is investigating a teacher after she posted a video admitting that she encouraged her students to pledge allegiance to a gay pride flag after she removed the American flag from her classroom.

“Okay, so during third period, we have announcements and they do the pledge of allegiance,” the teacher, identified as Kristin Pitzen of Newport Mesa School District in Orange County, said in a video posted to social media. “I always tell my class, stand if you feel like it, don’t stand if you feel like it, say the words if you want, you don’t have to say the words.”

“So, my class decided to stand but not say the words. Totally fine,” she continued in the now-viral video.

“Except for the fact that my room does not have a flag,” she said, explaining that she removed the flag during the pandemic and then whispered to the camera, “because it made me uncomfortable.”

She went on to say that one of her students asked where they should look during the pledge of allegiance since there is no American flag in the classroom.

“In the meantime, I tell this kid, ‘We do have a flag in the class that you can pledge your allegiance to. And he like, looks around and goes, ‘Oh, that one?'” and points to the pride flag.

The Newport Mesa School District told Fox News on Saturday that the incident is under investigation, but could not provide more details as it does not “discuss employee related matters.”

“We are aware of this incident and are investigating. While we do not discuss employee related matters, we can tell you that showing respect and honor for our nation’s flag is a value that we instill in our students and an expectation of our employees. We take matters like this seriously and will be taking action to address it,” public relations officer for the district, Annette Franco, told Fox News.

The video has meanwhile garnered backlash on social media, including from former acting director of national intelligence Ric Grenell.

“What kind of parent would allow their child to be taught by this wacko? Why are parents turning their kids over to someone they don’t know? I’d like to talk to people who think this is good?!?” Grenell wrote on Twitter, accompanied by the video.

In another video, published by Pitzen to TikTok, the teacher shows off the various LGBT flags she purchased to hang in her classroom for “Pride month” last June. In the clip, the teacher says, “I pledge allegiance to the queers.”

One Twitter user, wrote: “The majority of our universities are no longer creating educators but rather indoctrinators with ungodly social agendas. Parents need to place their children in the environment that most closely represents their family’s core values and ideologies. Public education is failing.”

If this teacher did not feel the need to publically boast, parents across the country may not have had the opportunity to see a very real glimpse into what their children are being taught.

Most teachers today ought to get a chill down their spine upon reading verses like Isaiah 5:20-21:

Matthew 18:6 KJV – “But whoso shall offend [cause to sin/place a stumbling block in front of] one of these little ones which believe in me, it were better for him that a millstone were hanged about his neck, and that he were drowned in the depth of the sea.”

Liberal indoctrination of children in schools has become out of control. This is not something any parent should take lightly. It should cause outrage that talking points heard from liberal media, politicians and radical activists groups are being taught to impressionable children as indisputable facts.

Kids are being taught to hate America, love communism, reject Biblical truth and morality, and regard all that disagree (conservatives and Christians) as evil and ignorant.

Over the past few months, we have seen teachers such as Laura Morris resign because they could no longer take part in pushing “highly politicized agendas” on children.

In May, a Christian gym teacher in Virginia lost his job for not using “transgender-affirming language.” A judge then ruled that the school must reinstate the teacher, Bryon Tanner Cross, and scolded the school board for violating constitutionally protected speech.