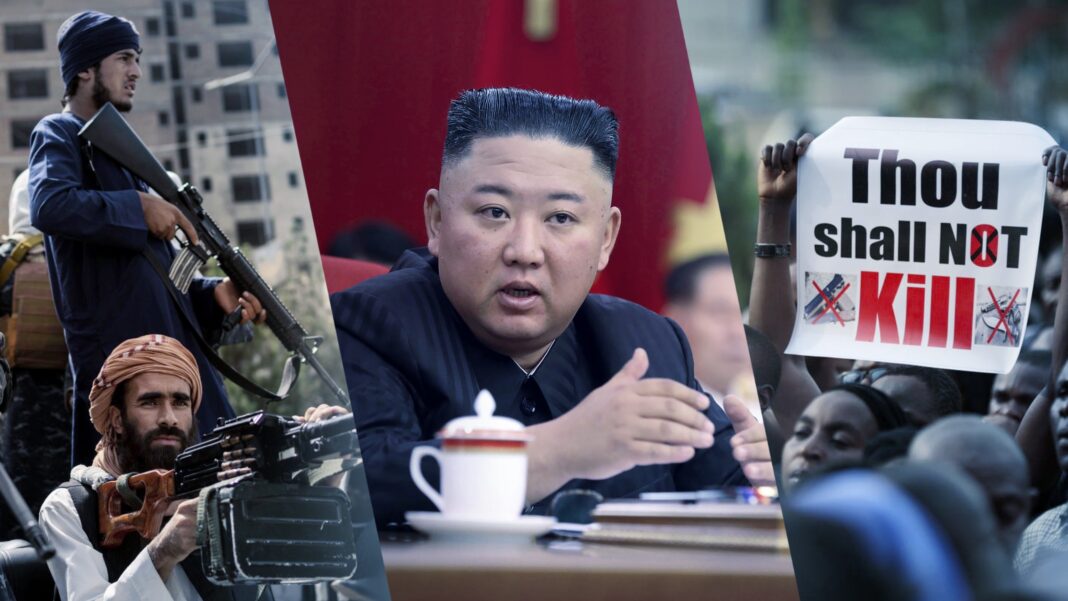 ICC, which has been a leading voice on Christian persecution since 1995, announced the distinctions in a 150-page report on the 24 worst oppressors for Christians. In determining the top 3 worst persecutors, ICC chose one country, one entity and one individual.

First, Nigeria was named the worst country for Christian persecution in 2021. ICC President Jeff King told The Christian Post that the African nation has been involved in a “20-year war against Christians,” which he described as genocide.

“There’s a one-sided war against Christians; there are two guerilla forces or factions fighting Christians,” he asserted.

According to the report, between 50,000 and 70,000 Christians in Nigeria have been killed since 2000. It is also home to the Islamic terrorist group Boko Haram, “which has displaced millions of people and killed tens of thousands of others.”

“In addition, conservative Islamic communities have allowed the forceful conversion and marriage of young Christian women and discriminated against Christians seeking employment,” the report continued.

Nigerian Christians also face persecution from Fulani militants who have “killed more Christians in the past several years than Boko Haram and have displaced Christian farmers.”

King noted that more than 3 million Christians have been displaced from their home, and/or had their lands and farms stolen by the extremists. The ICC president argued that the Nigerian government is “complicit” in the attacks on Christians.

The Taliban was named the worst group to carry out persecution against Christians of the year. According to King, the Taliban’s return to power in Afghanistan after the U.S. military withdrew from the country is what led the ICC to name the militant group a persecutor of the year.

“There are probably about 10,000 Christians … they’re all converts from Islam. And so when you’re operating in a culture of radical, fundamentalist Islam, that means you have a bullseye on your back,” King explained.

King further noted that after the Taliban retook Afghanistan, they began going door-to-door, asking, “Do you know where the Christians are?”

Over the past two weeks, a Christian man was reportedly murdered by the Taliban after they discovered a Bible app on his phone.

King warned that more Christians will “be tortured and given a chance to turn back to Islam. If you don’t, you’re going to be tortured more to find out what other Christians you know and then you’re killed.”

King also shot down the idea that the current iteration of the Taliban is made up of “half-decent” people who have turned from their old ways. Instead, King said, they are carrying out stealth operations to torture Christians.

“This is part of the Taliban’s work. They’re not going to come out and say it. They’re just not going to kill openly,” he explained. “So now, they’re going to become politicians. But they’re doing this kind of work in the background.”

Lastly, ICC named North Korean Supreme Leader Kim Jong-un as its individual persecutor of the year. The report argued that the Kim dynasty, which spans 3-generations, has “created a religious system modeled on the faith (god/father/son) with Kim Jong-un playing the part of the son that is to be worshiped. Any threat to the son and over-arching religious system is mercilessly crushed.”

“The Kim dynasties have tortured and killed millions of Christians over the decades. And I think we are familiar that it’s very common for the Kims or … the regime [to] put away three generations of one family when they’re identified as serious Christians,” King explained.

He estimated that around 30,000 Christians in North Korea have been taken to prison camps, and over one million have been killed.

According to Kim Seong Min, a North Korean defector, North Koreans are subject to the propaganda that Christians are enemies of the state. He noted that the Kim regime informs the public that the upper class uses Christianity to oppress the lower class.

Ken Ham, regarding Christian Persecution around the world, wrote:

All around the world, Christians are suffering for their faith, even paying the ultimate price of their lives. We need to remember to be in prayer for them. Also remember to pray that the freedoms we currently enjoy in our Western nations will not be taken away. And, regardless of our freedom or lack thereof, we need to share the message of the gospel of Jesus Christ with needy people. We always need to be about the business (proclaiming the truth of God’s Word and the gospel) of the King (Luke 19:13).

Salvation is free. Jesus paid the whole price.  But in this world, bearing His name carries its own cost.  In Acts 14:22, Paul the great teacher of grace, gave this warning to the Christians of Lystra, Iconium, and Antioch.  “Through many tribulations we must enter the kingdom of God.”

That amazing grace abides… It abides with millions around the world facing various levels of persecution because of their stands for Christ.  If you are His, it also abides with you.

According to the Bible, as we approach the end of the age, persecution of believers will increase.  But don’t despair.  In John 16:33, Jesus said, “In the world you have tribulation, but take courage; I have overcome the world.”