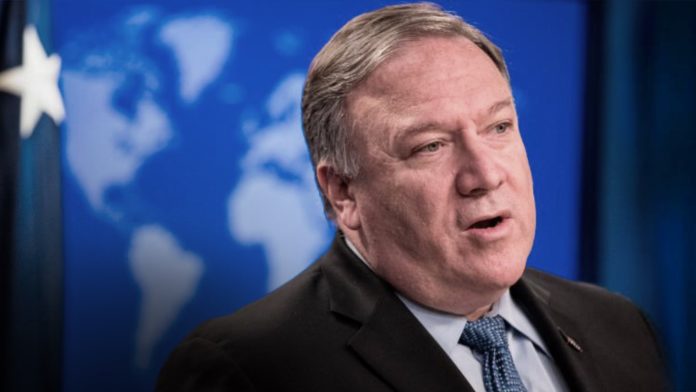 The United States is asking Chinese Communist Party (CCP) officials for access to the Wuhan Institute of Virology (WIV) lab to determine if the novel coronavirus originated there, U.S. Secretary of State Mike Pompeo indicated on Friday.

We are still asking the Chinese Communist Party to allow experts to get into that virology lab so that we can determine precisely where this virus began. It’s not political. This is about science and epidemiology. We need to understand what has taken place so that we can reduce risk to Americans in the days and weeks and months ahead and get the global economy back on track. It’s very important.

His comments came after U.S. President Donald Trump indicated on Wednesday that his administration is investigating whether the coronavirus emanated from the lab in Wuhan, adding that he has discussed the issue with Chinese dictator Xi Jinping.

“We are doing a very thorough examination of this horrible situation that happened,” Trump declared on Wednesday, adding on Friday, “We’re going to find out [what happened].”

The U.S. intelligence community is trying to determine whether the virus may have leaked from the Wuhan lab, Gen. Milley said, according to the Washington Times.

U.S. Secretary of Defense Mark Esper made similar comments on Thursday, telling NBC News about the origins of the coronavirus, “This is something we’ve been watching closely now for some time, the results are inconclusive.”

“A majority of the views right now is that it is natural, it is organic,” Esper added.

During an interview with Fox News on Wednesday, Pompeo asked China to “come clean” about the origins of the coronavirus, adding:

What we do know is we know that this virus originated in Wuhan, China. We know there is the Wuhan Institute of Virology just a handful of miles away from where the wet market was. There is still lots to learn. The United States government is working diligently to figure it out.

Earlier this week, Pompeo did not rule out the possibility of a coronavirus leak from the lab in Wuhan.

“Look, there’s still lots of work to be done to find out precisely what happened here, precisely how this came to be,” he told Tony Katz of the Morning News.

Consistent with a Breitbart News’s assessment, Pompeo indicated that the Beijing-influenced World Health Organization (WHO), an organ of the United Nations, helped China hide the severity of the coronavirus during the early stages of the virus, a move that allowed the disease to spread across the world.

[China’s] authoritarian regime had information, had data. It’s very clear now that the Chinese Communist Party and the World Health Organization didn’t put that information out into the international space as they’re required to do in a timely fashion, and the result of that is that we now have this global pandemic. We are still … suffering that today.

Echoing other news outlets that also cite anonymous sources, Fox News reported this week there is “increasing confidence” that coronavirus likely originated in a Wuhan laboratory.

In 2018, U.S. Embassy officials in China visited the Wuhan Institute of Virology (WIV) and sent back official warnings to the State Department about improper safety protocols at the lab, where researchers were carrying out risky studies on bat coronaviruses, the Washington Post reported Tuesday.

The lab is “China’s first laboratory to achieve the highest level of international bioresearch safety,” the Post noted.

Beijing has denied that the coronavirus originated at the Wuhan lab, at one point accusing the U.S. military of importing the disease to China.