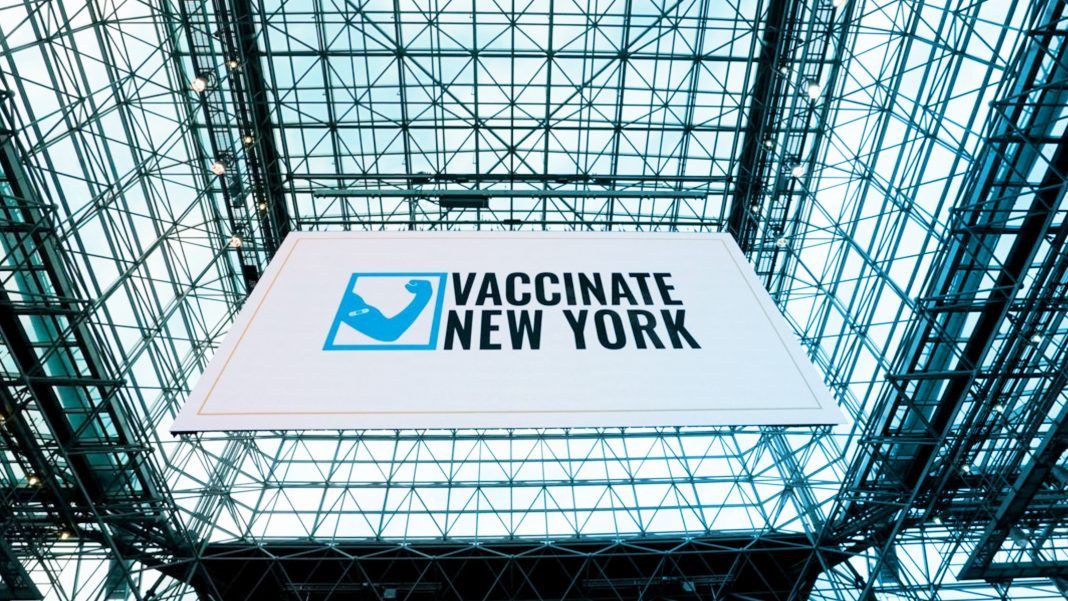 “I prayed a lot to God during this time and you know what – God did answer our prayers,” Hochul stated, before denigrating those who have not yet received a coronavirus shot.

He made the smartest men and women, the scientists, the doctors, the researchers – he made them come up with a vaccine. That is from God to us and we must say, thank you, God. Thank you. And I wear my ‘vaccinated’ necklace all the time to say I’m vaccinated. All of you, yes, I know you’re vaccinated, you’re the smart ones, but you know there’s people out there who aren’t listening to God and what God wants. You know who they are. [emphasis added]

“I need you to be my apostles,” the governor added, saying that receiving the treatment is how New Yorkers can “love one another.”

I need you to go out and talk about it and say, we owe this to each other. We love each other. Jesus taught us to love one another and how do you show that love but to care about each other enough to say, please get the vaccine because I love you and I want you to live, I want our kids to be safe when they’re in schools, I want to be safe when you go to a doctor’s office or to a hospital and are treated by somebody, you don’t want to get the virus from them.

On Monday, reports indicted that Hochul will sign an executive order allowing for the deployment the National Guard members as part of an effort to close the gap on possible healthcare staff shortages when the state’s vaccine mandate takes effect. The directive will also enable the governor to bring in healthcare workers from outside the state. Weekly virus testing are not allowed under the current mandate for people who opt against vaccination.

The New York Times reported on the upcoming potential shortages:

In Buffalo, the Erie County Medical Center plans to suspend elective in-patient surgeries and not take intensive-care patients from other hospitals because it may soon fire about 400 employees who have chosen not to get vaccinated against the coronavirus.

Officials at Northwell Health, New York’s largest provider of health care, estimate that they might have to fire thousands of people who have refused to get vaccinated.

And while the vast majority of staff members at New York City’s largest private hospital network, NewYork-Presbyterian, had been vaccinated as this week, more than 200 employees faced termination because they had not.

“We’re taking all the steps preemptively in anticipation of what I call a preventable staffing shortage – still preventable, enough hours in a day,” Hochul said during a press conference in the Bronx. “I don’t have to do this if people will get vaccinated, there’s plenty of hours left in the day, but I also know I need to be prepared.”

“We’ve sent out the alarm, we have a pool of individuals who want to help,” she added. “I would have much rather just been voluntary, but if I have to take steps to protect the people in terms of making sure I have replacements if necessary, I need to take those steps now and that executive order will do just that.”

A Christian Pastor in California, Shane Idleman, responded to those who state there is “No Credible Biblical Argument Against the Jab,” specifically addressing Dr. Robert Jeffress who has criticized those who are reluctant to get on the vaccine bandwagon.

“I love studying microbiology—everything from autophagy to creating energy in the mitochondria—fascinates me,” he wrote. “Granted, I’m not an expert on this topic, but I have learned over the years that the medical industry is not always focused on health. That responsibility often falls on our shoulders. Sadly, when we do our own research and question science (by the way, a tenet of science is to question science), the media mocks and scorns us. When Hollywood and the media ban, remove, falsify, and fact-check the other side, that’s a big redflag. Why aren’t they open to opposing views? So much for tolerance.”

“Most understand that all vaccines come with warnings and cautions and that sometimes, the good outweighs the bad,” he explained. “So why are those wanting to wait for more information scorned and ridiculed? From pericarditis to blood clotting, the side effects are real. Shouldn’t we do our due diligence and investigate, and at least listen to whistleblowers such as Jodi O’Malley?”

RECOMMENDED: Experts Warn Of COVID Vaccine Risks At FDA Hearing: ‘The Vaccines Kill More Than They Save’

“I asked my doctor, who has been a pro-vaccine physician for thirty years, what his thoughts were. He not only cautioned me against the mRNA but added that he is not seeing any difference between the unvaccinated and the vaccinated as it pertains to their level of sicknesses,” he continued. “Granted, if you ask nurses and doctors the same question, you will get different responses, but I’ve noticed that those with bias and skin-in-the-game, seem to sway the numbers to support their view. This is why I do not trust the death rate numbers. We are told that such and such died of COVID, but how do we know that they wouldn’t have died from the flu or pneumonia? I’m not minimizing even one death, but wisdom encourages us to evaluate what we are being told.”

“When Trump initiated Warp-Speed, there were (and are) good people on the medical teams whose heart is to simply help people, but in the mix, there is also Big Pharma with big agendas. Many people are simply trying to find a balance between wisdom and folly, and faith and presumption.”

“Wisdom also reminds me that our body is the Temple of the Holy Spirit,” the Pastor urged, explaining that it is justified for people to want to be aware of what they are putting in their bodies.

“Most recognize that much of the hysteria on both sides is driven by fear,” Idleman warned. When I surveyed nurses, most said that half the people visiting the hospitals are there because of fear. We have a real virus on our hands, but fear is causing a lot of people to react instead of respond. The shaming and belittling that is happening is also heartbreaking.”

“Whether it’s removing a family from a plane because a three-year-old wouldn’t wear a mask, or telling grandparents that they can’t see their grandchildren unless they’re vaccinated, fear is driving a lot of us away from common sense,” he asserted. “For example, those who have been vaccinated can still pass the virus on to others. Just this week, a friend of mine said that he believes that his vaccinated wife passed COVID on to him and he ended up in the hospital. Of course, no one knows for certain, but it does beg the question: Do we really know as much as we think we know about the mRNA vaccine?“

“So what is the Christian response to all of this? We must respect both convictions,” he wrote. “A sixty-seven-year-old adult may view the vaccine much differently than the twenty-five-year-old pregnant mom who is concerned about the mRNA affecting her as well as her newborn. Most critics are not acting brazenly with a spirit of rebellion (although some are); most I know have compassion for humanity, especially for their own children. A great deal of people are also convicted about the use of fetal tissue.”

“Whether it’s to see their grandkids, remain on the mission field, or keep their job, solid Christians have sought God in prayer and have decided to get vaccinated,” Idleman insisted. “My prayer is that it works for them. I’m not anti-vaccine; I’m for what works. But we also must respect those who feel forced, manipulated, and shamed into taking something they don’t feel good about. Ultimately, it’s unwise to say that there are no biblical grounds for holding off until we have more information: ‘Wisdom is the principal thing; therefore get wisdom: and with all thy getting get understanding’ (Proverbs 4:7). People need hope and we need to point them to the source of hope.”

“Only repentance, not vaccination, will set us free. Take time now, repent and turn your life over to Him. That’s the key to ultimate victory,” he added.