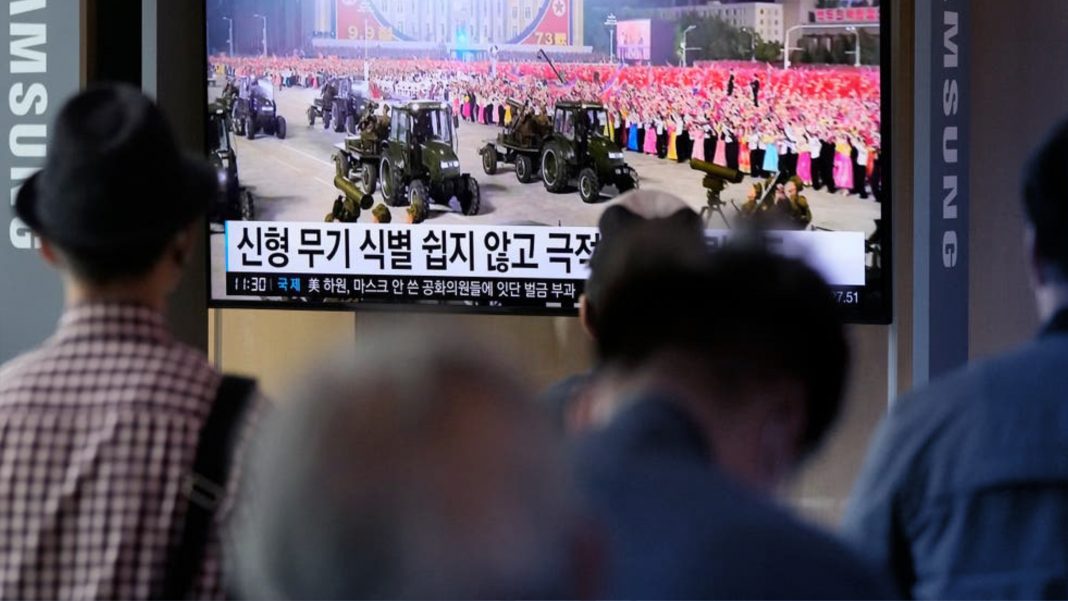 North Korea reportedly fired two ballistic missiles off its east coast Wednesday, in the direction of Japan, prompting Japan’s prime minister to denounce the action as “absolutely outrageous,” according to reports.

“The firings threaten the peace and safety of Japan and the region and are absolutely outrageous,” Japanese Prime Minister Yoshihide Suga said, according to The Associated Press. “The government of Japan is determined to further step up our vigilance and surveillance to be prepared for any contingencies.”

Japan’s coast guard said both projectiles landed in international waters between Japan and the Korean Peninsula, the AP reported.

According to the AP, South Korea’s Joint Chiefs of Staff said in a statement that the North Korean projectile flew toward the waters of the Korean Peninsula’s east coast on Wednesday. It gave no further details.

The multi-day operation was confirmed as a “success” by leading officials and scientists of the Academy of National Defense Science who took part in the testing of the new type of cruise missile that was launched on Sept. 11 and Sept. 12, KCNA report.

The missile, dubbed “a strategic weapon of great significance,” flew 930 miles before hitting its targets and falling into the country’s territorial waters during the tests, according to the agency. The weapon system was in development for the past two years.

A collage published by KCNA shows the missile being fired from a launch vehicle, as well as the rocket artillery traveling in horizontal flight. The missile reportedly traveled for 7,580 seconds in the air above territorial land and waters of the communist country before hitting its target.

United Nations Security Council (UNSC) resolutions have barred North Korea from testing ballistic missiles, and the country has been heavily sanctioned over its missile and nuclear weapons programs.

North Korea has also ignored offers from the Biden administration to resume negotiations to abandon its nuclear program. The most recent tests were the most significant since President Joe Biden took office. Earlier in January, just hours after Biden’s inauguration, North Korea test-fired cruise missiles, while later in March it again tested a new tactical short-range ballistic missile.

President Donald Trump, who met with Kim Jong Un three times during his four years in office, was the first U.S. president to set foot on North Korean soil.

Park Won-gon, professor of North Korean Studies at Ewha Womans University, told AFP that the new strategic missile “poses a considerable threat,” adding that he believes it is “very likely that there will be more tests for the development of various weapons systems.”

“If the North has sufficiently miniaturized a nuclear warhead, it can be loaded onto a cruise missile as well,” Park noted.

The United States Indo-Pacific Command said in a statement it is monitoring the situation and U.S. officials are in close contact with allies and partners following the reports of rocket artillery tests.

“This activity highlights DPRK’s continuing focus on developing its military program and the threats that pose to its neighbors and the international community,” the combatant command responsible for the Indo-Pacific region said. “The U.S. commitment to the defense of the Republic of Korea and Japan remains ironclad.”

Cruise missiles and short-range ballistic missiles that can be armed with either conventional or nuclear bombs are particularly destabilizing in the event of conflict as it can be unclear which kind of warhead they are carrying, analysts said.

It is unclear whether North Korea has mastered the technology needed to build warheads small enough to be carried on a cruise missile, but regime leader Kim Jong Un said earlier this year that developing smaller bombs is a top goal.

Kim did not appear to have attended the test, with KCNA saying Pak Jong Chon, a member of the Workers’ Party’s powerful politburo and a secretary of its central committee, overseeing it.

The Biden’s failure in Afghanistan has caused many enemy/rogue nations to become emboldened. Countries such as China, Russia, Iran, Turkey, and North Korea have taken the American Administration’s weakness with the Taliban, as a green light to do as they please with little worry of US intervention.

Recently, Communist-run China has seized the opportunity to take control of disputed waters, ordering any foreign vessel that passes the “nine-dash line” to report in advance to the country. China has also in recent months stepped up its threats against both Taiwan and Japan.

Furthermore, it has recently been reported by the IAEA that North Korea has restarted its Yongbyon nuclear reactor which is believed to produce plutonium for nuclear weapons.

North Korea appears to have restarted a nuclear reactor that is widely believed to have produced plutonium for nuclear weapons, the U.N. atomic watchdog said in an annual report, highlighting the isolated nation’s efforts to expand its arsenal.

In Luke 21:24, Jesus says, “There will be signs in the sun, and in the moon, and in the stars; and upon the earth Distress of Nations with Perplexity, the seas and the wave roaring.” These things will be greatly increased and primarily take place during the seven-year Tribulation (from which the church is absent). However, with the current global state of turmoil amongst the nations, we can’t help but recognize the distress of nations Jesus describes in Luke 21 and Matthew 24, rising in our world today.

Post-American World Order? China Uses Afghan Crisis to Warn Taiwan: When We Take Over, ‘US Military Won’t Come To Help’