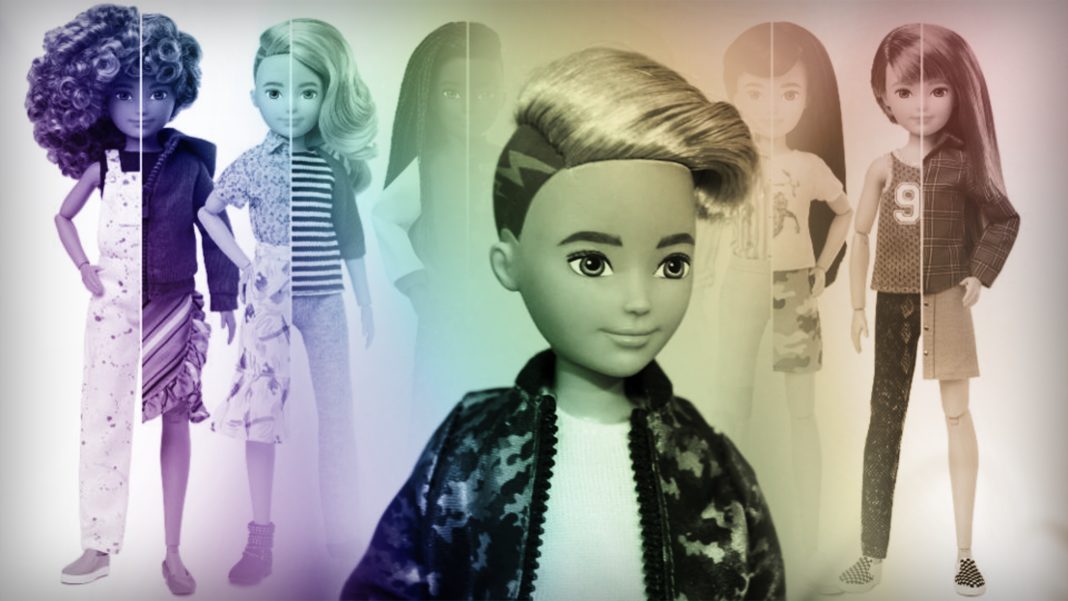 Barbie, that voluptuous, clearly female doll, has some new, not-so-clearly-defined competition. Oh, she’s still around, but now her creator, Mattel, has launched its “Creatable World” doll line, which the toymaker says is designed “to keep labels out and invite everyone in.”

According to the Mattel website, the gender-neutral dolls allow “kids the freedom to create their own customizable characters again and again.”

The “Creatable World” line consists of six dolls with different skin colors and hairstyles that can be adjusted with long or short-hair wigs. Clothing is just as varied with skirts, pants, shirts, jackets, hats, and a variety of shoes. Each doll kit retails for about $30.

As NPR reports, “The doll is fully gender-neutral and can be accessorized to be a boy, a girl, neither, or both.”

Okay. What am I missing here? I’m looking at this new doll line and, honestly, I don’t see too much different from the dolls I knew as a child a million years ago. Granted, no one would ever accuse me of being “woke.” But those dolls I found under the Christmas tree each year were not, as we say, “anatomically correct.” Many of them – especially baby dolls – could be a boy or girl, whatever you imagined them to be, and you could dress them accordingly. Of course, then came Barbie with her substantial “assets” and hourglass figure. And that doll was criticized for pigeonholing women and setting a standard for looks not many women could meet. I hated her.

So, if the dolls were gender-neutral then, for the most part, what’s different now? From what I see, it’s all in how they’re being presented. This looks more like a clever marketing strategy by Mattel than a brand new product birthed out of great concern over kids needing a doll with whom they can immediately identify. Their marketing fits right into the agenda of those who want children to believe that their gender is not determined by their plumbing, hormones, and DNA, but by what gender they think they are. Certainly it is a response to the roiling cultural debate over that issue, and there might be a niche market for the idea. But it’s a fact, it’s not usually bad for a company to be in the good graces of the prevailing opinions of the media. If you are, you’re pretty much immune to criticism and can get a lot of free publicity for your new product.

But Mattel’s “wokeness” is not an innocuous marketing strategy. It’s not that the dolls are gender-neutral that should concern us, but that they are a teaching tool to tell kids they can decide for themselves not only what their dolls will be, but what they themselves can be. It’s a new ingredient to a toxic cultural stew that just adds to the confusion of children.

Interestingly, the LA Times reports that Mattel has been struggling financially in recent years. Last year the company lost $531 million on sales of $4.5 billion.

Will this politically correct marketing strategy for its new line of old-style dolls make a difference?

On Wednesday, the day the new dolls launched, Mattel’s stock closed unchanged at $10.99 a share. According to the newspaper, the stock has tumbled 32% in the last 12 months and is down from $30 a share three years ago. Mattel’s hoping that its cost-cutting will help turn things around. That and a wider marketing of its brands in entertainment and digital fields.

There you have it. It never hurts to tout your “wokeness” to the media if you want to help that bottom line. Even if it adds to the confusion of children.

I’m alarmed that poor kids with no parents who are homeless & distraught, you would [put] through this and allow that to happen to a minor.“
Read more
Children in the Crosshairs