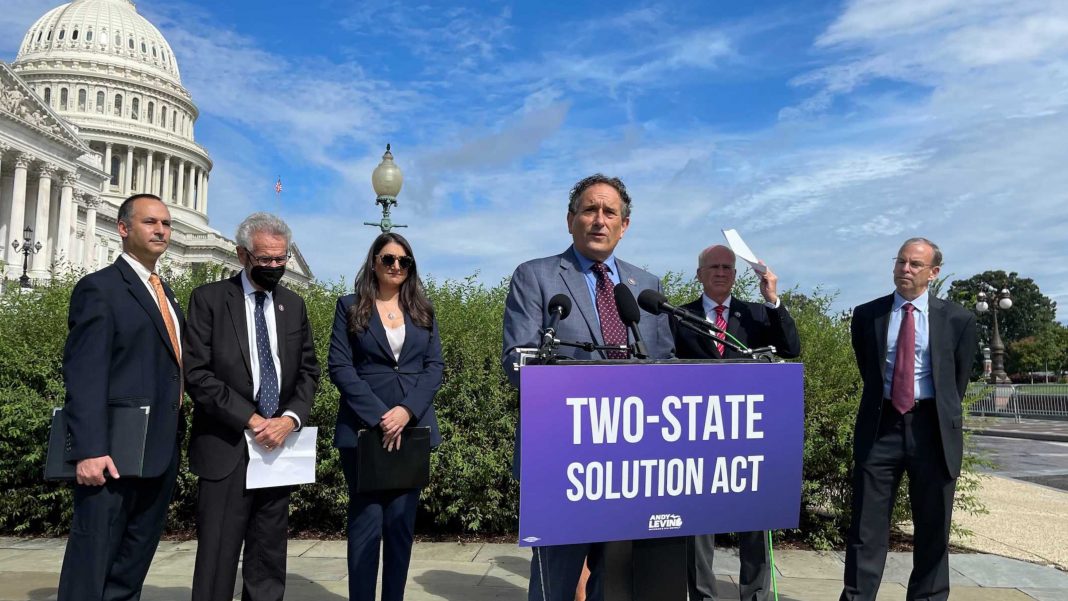 A liberal Jewish lawmaker on Thursday is set to introduce a bill that would make the two-state solution to the Israeli-Palestinian conflict official United States policy, Politico reports.

Andy Levin, a Democratic representative from Michigan, will unveil the legislation on Capitol Hill that is adding to an already heated debate about the US approach to the Jewish state that has divided Democrats between the moderate and progressive wings of the party.

That divide was clear this week when progressive Democrats in the House of Representatives blocked $1 billion in funding to replenish Israel’s Iron Dome missile defense system that was depleted during May’s 11-day conflict with the Hamas-ruled Gaza Strip.

Levin already has 18 Democratic co-sponsors and the support of left-leaning pro-Israel groups, including J Street.

Still, the bill faces an uphill battle in Congress with expected universal opposition from pro-Israel Republicans and skepticism from moderate pro-Israel Democrats in the House and Senate.

The “Two-State Solution Act” formally states “that the West Bank, including East Jerusalem, and Gaza are occupied territories and should be referred to as such consistently in official United States policies, communications, and documents.”

It is unclear why Gaza is mentioned since Israel unilaterally withdrew from the coastal enclave in 2005.

The bill also states “that the establishment of Israeli settlements in the occupied Palestinian territories is inconsistent with international law.”

The harsh stance on the disputed territories and Jewish communities there is likely to face pushback from certain pro-Israel groups.

Levin also wants to reopen the US consulate for Palestinians in Jerusalem, a move that the new Israeli government opposes.

Recognizing a portion of Israel as occupied Palestinian Territories and opening a separate Palestinian consulate in Jerusalem, runs in direct contrast to both reality and international law. More concerning, however, is the fact that doing so would be an attempt to divide the Jewish State.

Michael Freund who served as deputy communications director under prime minister Benjamin Netanyahu during his first term made clear that a separate consulate to the Palestinians would “lay the groundwork for dividing Jerusalem.”

Anne Graham Lotz in her recent article, “Israel’s Spiritual Conflict & What Supporting The Jewish State Looks Like,” explained that America’s dealings with Israel, directly correlate with God’s hand either blessing or cursing the country.

“God promised Abraham, those who bless you I will bless, those who curse you, I will curse (Genesis 12:3). The way we treat Israel, that’s closely related to the way God treats us,” she wrote. “The fact that America was the first to recognize Israel as a nation, I believe that’s one reason God has poured out His blessing on America. But if we back away, if we abandon her, He says those who curse Israel I will curse. It’s to our own benefit, actually, to bless the nation of Israel.”

“In Matthew 24,” Anne described. “Jesus listed all these signs of His return, and then He said the generation that sees all of this take place will be the last generation. That generation, I believe, started with the rebirth of Israel because He used the parable of a fig tree. He said when you see it put forth leaves, that’s the generation. (See Matthew 24:32-34.) That happened on May 14, 1948.”

“The signs that He gave us—from the natural disasters to the false prophets to the false Messiah to the lawlessness—all of that happening in one generation, that’s since I was born,” Anne explained.

“I believe what we’re looking at, we’re looking at the end of all things,” she asserted. “What’s happening in the world, I believe, is a setup for the tribulation and the antichrist.”

“But I know that Jesus sits on the throne, He’s in control, He’s orchestrating everything according to His plan,” Graham encouraged. “When everything is said and done, Israel will still be Israel, and He will reign and rule from Jerusalem. She will not just be restored, but she will be in her glory and be the preeminent nation in the whole world.”

“[Israel] has a brilliant future ahead of her, but there may be some hard days between now and then,” she added.

The Bible states in Luke 21:28 that “when these things begin to come to pass,” we as believers in Jesus Christ are to “look up, and lift up your heads; for your redemption draweth nigh.”