‘We Ask That You Would Unite Our Hearts’: Franklin Graham’s Prayer on Final Night of RNC 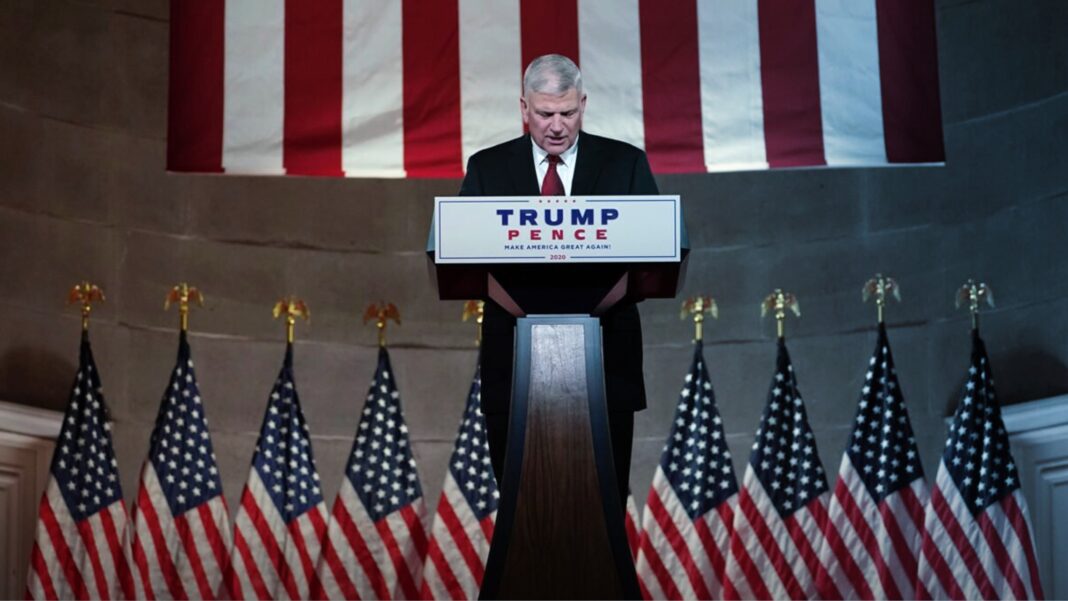 Following in his father’s footsteps, evangelist Franklin Graham appeared Thursday night at the fourth and final night of the 2020 Republican National Convention not to deliver a sermon or to stump for a political candidate, but to pray for the nation.

Graham, the president and CEO of the Billy Graham Evangelistic Association and of the Christian charity organization Samaritan’s Purse, delivered the opening prayer of the convention standing on the stage of the Andrew W. Mellon Auditorium in Washington, DC.

After an opening video highlighting scenes of the night’s theme “Land of Greatness” the son of the late Rev. Billy Graham began to pray from the podium.

“Our Heavenly Father, which art in Heaven, we thank you for the great bounty you have bestowed on this nation and the many blessings we have received the past four years. We are forever grateful.”

“As we come tonight, our country is facing trouble. Tens of thousands are in the path of a deadly storm. The pandemic has gripped millions of hearts with fear. We are divided. We have witnessed injustice. Anger and despair have flowed into the streets. We need your help. We need to hear your voice at this crucial hour,” Graham prayed, pausing momentarily.

“We ask that you would unite our hearts, to be one nation under God. For you are our only hope. We declare today our total dependence upon you and our need of repentance as a people.”

“I thank you tonight for our President Donald J. Trump. We pray that you would give him wisdom from on high, clarity of vision, and strength as he leads this nation forward. Bless him. We pray for our first lady Melania. Their son Barron and all of the family. Protect them and keep them strong and safe.”

“We thank you for Vice President Mike Pence. For his steady hand and clear voice. We pray for second lady Karen Pence and their family.”

“Father, we know that you can make this nation great once again, if we turn our eyes and our hearts to you, and follow your word in obedience. May your will be done on this earth as it is in heaven. And we pray this in the mighty name of your son, my Lord and Savior Jesus Christ. Amen.”

Graham’s father, the world-renowned preacher Billy Graham gave the benediction at both the Democratic and Republican National Conventions in 1988. He died in 2018 at the age of 99. The elder Graham served as a spiritual adviser to 12 US presidents.

In a Facebook post earlier this week, Franklin Graham reminded his followers of his recently announced Prayer March on Washington scheduled from 12:00 pm to 2:00 pm on Saturday, Sept. 26. The march will begin at the Lincoln Memorial and end at the US Capitol.

“Prayer is the most powerful weapon we have,” the evangelist wrote.

“I want to personally invite you to join me in Washington, D.C., on Saturday, September 26, at 12:00 noon-2:00 PM for Prayer March 2020. This will be a singular focus on prayer for our country. I hope thousands will join me to march from the Lincoln Memorial to the U.S. Capitol, asking God to have mercy on our nation and turn us back to Him. When King David prayed for Israel, the Bible says, “the LORD was moved by prayer for the land” (2 Samuel 24:25),” Graham concluded.

For more information, go to PrayerMarch2020.com.

“As Americans, we know the first line of the First Amendment protects our freedom of religion. But what we often forget, the actual words are ‘free exercise of religion’,” Lynch, 34 said. “That means living out our faith in our daily lives…at our schools and at our jobs. And yes, even in the public square.”

The nation’s founders she said, did not envision a quiet, hidden faith.

“They fought to ensure that the voices of faith were always welcomed,” Lynch noted. “Not silenced. Not bullied.”

She cautioned that even during the pandemic, Americans saw how quickly life can change.

“Some Democratic leaders tried to ban church services, while marijuana shops and abortion clinics were declared essential. But do you know what is truly essential?” Lynch asked. “Our right to worship freely and live our faith in every aspect of life.”

She warned the Biden-Harris vision of America leaves no room for people of faith and also recalled what her world-famous grandfather once said about freedom.

“Whether you’re a baker or a florist or a football coach, they will force a choice between being obedient to God or to Caesar. Because the radical Left god is government power,” Lynch noted. “So in the words of my grandfather Billy Graham, ‘Let us stand for political freedom, moral freedom, religious freedom, and the rights of all Americans. And let us never give in for those who would attempt to take it from us’.”