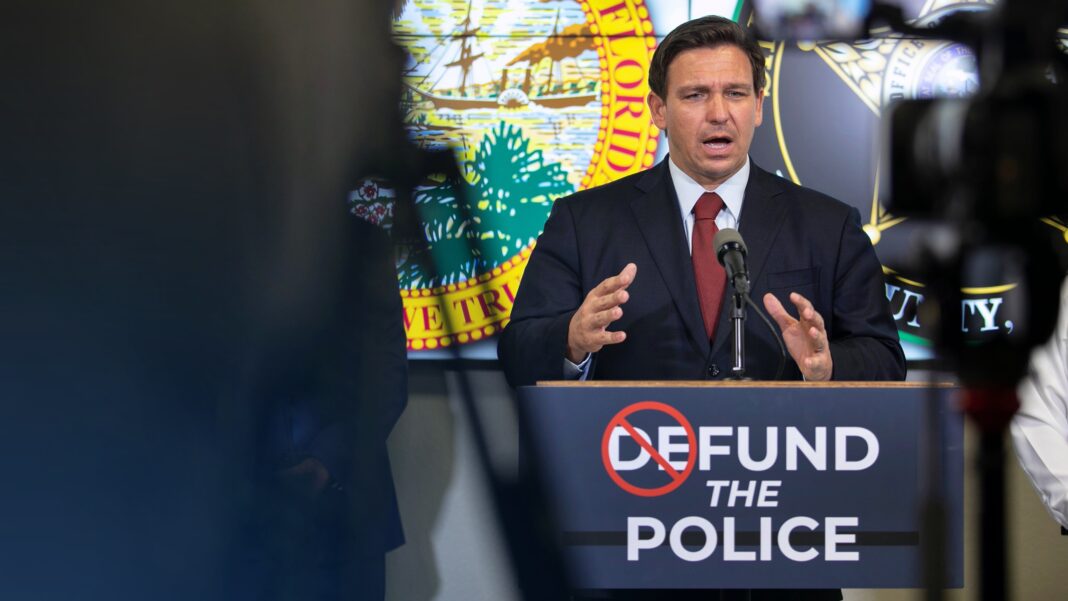 Florida Gov. Ron DeSantis said on July 12 that police officers from around the United States are welcome to relocate to Florida for a better workplace “culture” if they feel disenchanted.

“I do think you will see; I think you’ve already seen. But there are people in these police departments in various other parts of the country who, if they can get a job in Florida, they want to come to Florida to be able to do it,” he said, according to local media. “Because the culture is better, and they understand they’re going to be supported much more resolutely [in] what they do.”

DeSantis made reference to rampant anti-police protests last year following the death of George Floyd, arguing that the lack of support for law enforcement has caused crime rates to spike. Some city governments moved to cut funding to their police departments in the face of left-wing calls to “defund the police.”

Some cities such as Baltimore, Los Angeles, New York City, Seattle, Minneapolis, and Portland, Oregon, cut police funding in the wake of the demonstrations and riots—although some municipalities have recently begun to pledge additional funding to departments.

“Make no mistake: the reason that you have such huge spikes in crime in many parts of the country is because of not standing up for law enforcement, having weak policies where you’re letting people out, and you’re not prosecuting people who are committing habitual offenses,” the Republican governor also said. “That is clearly causing disastrous consequences.”

The governor’s comments come amid a wave of retirements and resignations in police and sheriff’s departments across the United States. Recruitment is also down across departments.

An analysis by The Epoch Times last month revealed that the top three police departments in the country—New York City, Los Angeles, and Chicago—have lost thousands of officers since 2019. Other cities have seen significant declines in their law enforcement ranks.

Over the past two years, the LAPD has lost about 600 officers, which reportedly has been blamed on a government hiring freeze implemented during the COVID-19 pandemic, as well as the City Council’s move to cut the department’s budget by about $150 million amid “defund the police” calls.

In Chicago, 646 officers resigned or retired in 2020, while as of April 30 this year, 330 have left the department, the analysis shows.

New York hasn’t fared much better, either, with retirements spiking to 2,600 last year from 1,509 in 2019, an NYPD spokesperson said. An additional 350 NYPD officers have exited this year, as of May 15.

Franklin Graham in his article, “Hope In An Age Of Lawlessness,” discussed the rising disrespect of police and anarchy filling our streets and how it points to the soon arrival of the “lawless one” coming onto the world scene:

We’ve seen it play out on our screens as violent protests against law enforcement have broken out in numerous American cities. Police stations and police cars have been burned; officers have been shamelessly heckled and have come under attack by throngs of angry protesters. Calls to defund the police, which began with the George Floyd case, spread quickly into city councils, and even into the halls of Congress.

An officer in Los Angeles was called a “murderer” and a “racist” at a simple traffic stop.

A California college student was berated by his professor for expressing his support of the local police.

In the Bronx, New York City police officers were heckled and cursed while responding to a call for help. “Sadly, this is the result of years of elected officials demonizing police officers and decriminalizing abhorrent behavior,” said the local police union. “We will only be successful in reducing crime if the good people of the community lend us a hand by showing support for police.”

The Bible says, “For the mystery of lawlessness is already at work” (2 Thessalonians 2:7). Behind the ever-rising tide of violence, rage and anarchy is the evil one, the devil himself, spreading his wickedness in increasing intensity. The sheer brutality that has infected our culture is shocking, but not to our adversary who delights in it.

God appointed civil authorities—including our law enforcement—along with the godly influence of the church of the Lord Jesus Christ and the supernatural ministry of the Holy Spirit, to restrain evil to a degree (Romans 13:1; 2 Thessalonians 2:7).

I believe the devil is called the lawless one because he has openly rebelled against Almighty God and seeks to oppose Him at every turn. The enemy has no regard for the decrees, statutes and commandments that God has laid down in Scripture.

But as Martin Luther so famously said:

Though this world, with devils filled, Should threaten to undo us, We will not fear, for God hath willed His truth to triumph through us.

I look forward to that day, don’t you?

Finding Peace In The Midst Of Lawlessness & Deceit