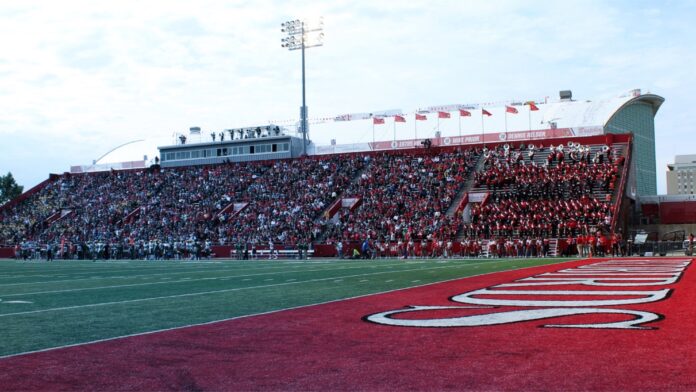 A former Illinois State University football coach said his sudden departure from the program last week came after some players were offended by a sign he posted on his office door that read: “All Lives Matter to Our Lord & Savior Jesus Christ.”

, the son of former National Football League quarterback and general manager Bobby Beathard, was in his third season as offensive coordinator and quarterback coach for the Redbirds when it was announced last Wednesday that he was no longer part of the program.

Beathard, who was in his second stint with the school after taking time off during his wife’s battle with cancer, told The Pantagraph daily newspaper that his sudden departure from the program came after he posted the sign on his office door.

While three sources close to the football team told the newspaper that a “Black Lives Matter” poster was taken down from the football locker room, Beathard said he had nothing to do with removing anything from the locker room but took down a similar sign posted on his office door.

“That locker room crap is wrong,” Beathard said. “I took the sign down somebody put on my door. That’s it. I didn’t take anything off that wasn’t put on my door. I wrote the message.”

Beathard’s departure comes after some student-athletes called for a boycott earlier this month after Athletic Director Larry Lyons told athletes on a Zoom call that “all Redbird lives matter.”

A paraphrase of the saying “All Lives Matter,” many left-leaning activists have decried that phrase and accused those who use it of trying to delegitimize the fight against racial injustice and police brutality in the United States.

An “Athletics March for Black Voices” was held on Sept. 4.  Lyons has since apologized for saying “all Redbird lives matter.”

Among those who spoke out against Lyons’ use of the term “all Redbird lives matter,” was Illinois State senior running back Jeff Proctor, who claimed such a comment makes it seem like the athletic director “doesn’t care about the black community.”

Last Thursday, head coach Brock Spack and Lyons declined to provide comment to The Pantagraph on Beathard’s departure on grounds that it was a personnel matter.

While some reports have suggested that Beathard stepped down from his role, Beathard clarified in an interview with OutKick’s Jason King that he “did not quit that job.”

“I never quit,” he was quoted as saying.

King reports that the issues began in mid-August when he arrived at his office one morning to find a “Black Lives Matter” sign taped on his door, which he immediately removed.

According to OutKick, the sign included the link to BlackLivesMatter.org, the website for the far-left political organization that Beathard views as a Marxist organization considering one of its founders admitted that she and others were “trained Marxist.”

According to King, Beathard also disagrees with the call to disrupt the “Western-prescribed nuclear family structure.”

“‘I thought, ‘No, I can’t have this on my door,’” Beathard said. “So I took it off and put it behind the chair in my office. I was praying about it and I thought, ‘All lives matter here, and there’s no other organization other than Jesus Christ to sponsor that.’”

Later on in the day, Beathard hung his sign, adding that he had relied on religion more than ever during the past year in which his wife, Karen, lost her battle with cancer and his nephew was stabbed to death.

The former coach explained that the sign hung on his door for over two weeks before he was “politely asked” by a superior to remove it.

“They didn’t demand it,” Beathard said. “They just said, ‘As a favor, could you please take that off your door?’ I didn’t take it off right away. I sat there and prayed about it, and I said, ‘God knows where my heart is. That’s all that matters. If it will help to take it off, I’ll take it off.’”

Beathard explained that someone had taken a picture of the sign, which circulated among members of the team, offending some of the players.

On Sept. 2, Beathard said he no longer held a position as a staff member on the football team.

“I truly believe that all lives matter,” Beathard responded. “It’s right there in the Bible. God doesn’t discriminate. He doesn’t say, ‘Oh, I kinda like some of these people. But I really, really, really like these other people.’”

“I keep hearing about the abortion rates and the gun killings,” he added. “I think about the stuff that I got angry about when my nephew was tragically murdered. His life mattered. My wife’s life mattered, too. She lived with cancer for five years. She mattered to me. It’s about every life.”

The Washington Post reported that a Facebook account that appears to belong to Beathard previously shared messages of support for President Donald Trump and criticism of national anthem protests during sporting events. The newspaper said the personal Facebook page also “… asked people to ‘Pray for our president,’ and it included an image with the message, ‘Babies Lives Matter Also.'”

According to the university, the Redbird offense set 15 single-season school records for things such as points, touchdowns, total offensive yards and rushing yards during Beathard’s first season as the team’s offensive coordinator in 2014.

That year, the school was ranked No. 4 among at NCAA Division I Football Championship Subdivision schools in passing efficiency.

“I don’t like that you can’t have a different opinion than someone else,” Beathard added. “But I wouldn’t change [what I did]. I’m not going to deny Jesus. If you deny Jesus, He’ll deny you. It’s written in the Bible, multiple times. I’m not going to back down on that one …”