‘We Are Standing for the Cross’: Christians Unite as Antifa Activists Threaten to Tear Down Cross 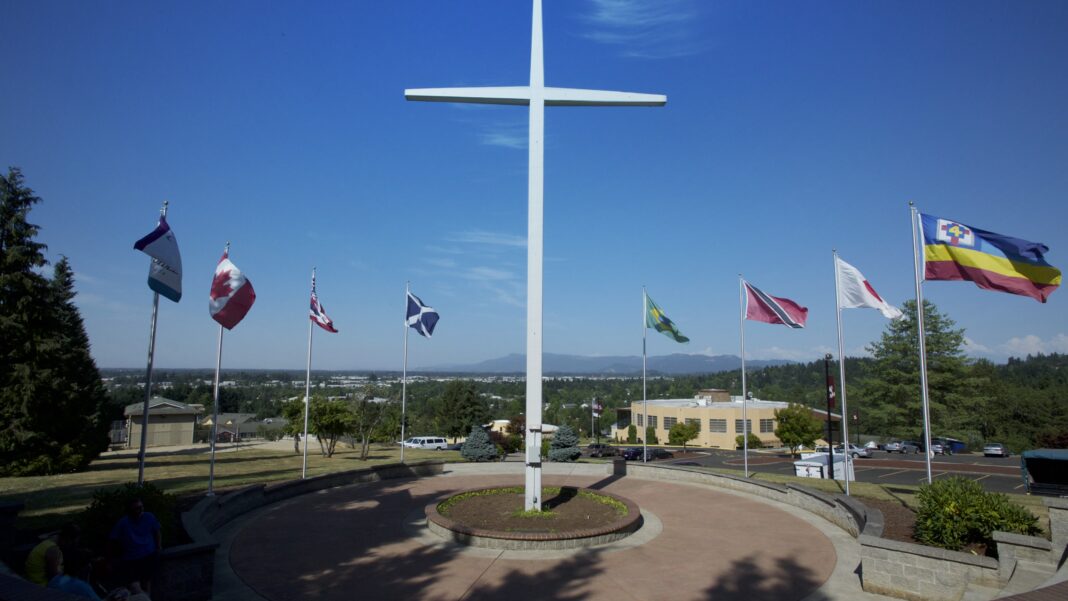 A Christian college in Eugene, Oregon is standing against radical activists who want to deface or tear down a cross that has stood on the campus for decades.

Members of Antifa claim the cross is a racist symbol and they want it removed from the private campus of New Hope Christian College.

In a Facebook post, the college wrote that the cross embodies hope and the unconditional love from our Heavenly Father.

“The history of the cross and how it came to reside on our campus has been well documented over the years, and there is no evidence to suggest our cross has direct roots to racism other than it once resided on Skinner Butte, the same location where racist events were held in the 1920s. People referring to our cross as the ‘KKK’ cross is false.”

The school says the cross was not around at that time and didn’t even exist until many decades later. “From 1934-1964, wooden crosses were displayed on Skinner Butte; these crosses were not associated with the racist activities of the 1920s but simply powerful symbols of hope set high above the City of Eugene.”

Members of the Christian community arrived at the college last Friday to pray for God’s protection over the cross and against the enemy.

Tim Ravan with Global Connectors came to New Hope to join the prayer movement and support the college. He told CBN News that “without intercession…nothing happens.”

“There is a strong core of people standing for what is right,” he said. “This is kingdom business and the church has to be awakened. We are standing for the cross.”

Ravan said hundreds of people gathered over the weekend, including non-believers who came to the cross just to thank everyone for their efforts.

“Cars were driving by, honking their horns and people were saying thank you,” he added. “Non-believers were there to support the school.”

“People were really responding, standing up, and doing something. This is really impacting the nation, it’s a line in the sand,” Ravan concluded.

Pastor Wayne Cordeiro with New Hope told CBN News that the presence of God was evident as they surrounded the cross and prayed for protection.

“We worshipped for two hours in the midst of it,” he said. “We had a safety and security team, the majority of us were at the cross worshipping and praising.”

Even though activists did not deface the cross, Pastor Cordeiro said the college will “remain vigilant in case protesters come back.”

Antifa agitators were also in Portland over the weekend where they burned Bibles and an American flag in front of a federal courthouse.

The riots have drawn thousands to the city park in front of Portland’s federal courthouse. Some say they are protesting for racial justice, others want to defund the police nationwide.

Reporting from the scene, CBN News Contributing Reporter Chuck Holton said it’s clear that most of those participating in the riots don’t want to abolish the police but instead want to act like the police to enforce their own agenda.

"We made it clear to the venue at the time of booking we're a Christian organization–This is anti-religious discrimination, plain & simple"
Read more
Distress of Nations

"They know they're going to be judged in accord with the Word of God & they still continue to persevere in their obstinacy. This is defiance"
Read more