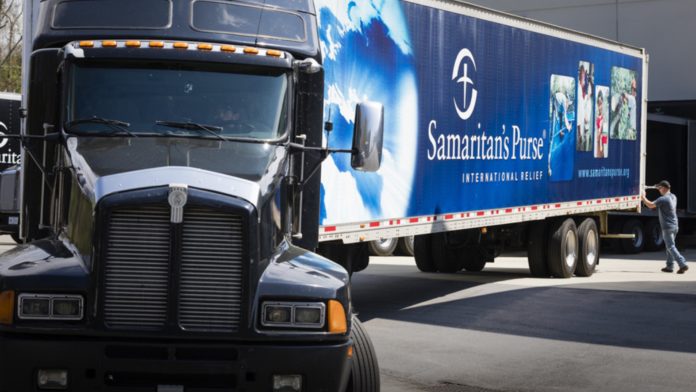 The Billy Graham Rapid Response Team (RRT) is preparing to minister alongside Samaritan’s Purse after a massive storm system swept across the Southeast on Easter Sunday and into Monday, spawning dozens of tornadoes that killed at least 32 people and left many more injured.

“As many communities are asked to stay at home, my heart breaks for families that now have nowhere to go—losing loved ones in a matter of minutes,” said Franklin Graham, president of the Billy Graham Evangelistic Association and Samaritan’s Purse. “Please join me in praying for God’s peace and comfort to cover them.”

More than 1.2 million people lost power from the intense storms, and hundreds of homes were damaged or destroyed due to the system’s side effects of twisters, large hail, high winds and flash flooding.

“We’re going right into the heart of this disaster,” said Josh Holland, the RRT’s assistant director who commissioned the two vehicles with prayer on Facebook Live.

Eleven fatalities were reported in the hardest hit region—Mississippi—where a pair of tornadoes just miles apart flattened homes and another tornado ripped through 100-plus miles of the state. That heartbreaking news is combined with the ongoing fight against COVID-19—a growing threat across the country.

The state of Louisiana was already grappling with a severe outbreak of more than 20,000 COVID-19 cases before being pounded by the storm. As the ministries head south, both the Rapid Response Team and Samaritan’s Purse will strictly adhere to federal and local guidelines as they talk with homeowners and repair homes in the tornadoes’ aftermath.

For weeks, the teams have been working together to serve those facing the coronavirus at Samaritan’s Purse field hospitals in New York City’s Central Park and northern Italy, where they’re offering support to communities, medical staff and patients.

As thousands now face a pandemic and natural disaster, it’s more important than ever to cling to the hope of Jesus Christ.

“This is not how anyone wants to celebrate Easter,” Mississippi Gov. Tate Reeves said on Twitter. “As we reflect on the death and resurrection on this Easter Sunday, we have faith that we will all rise together.”