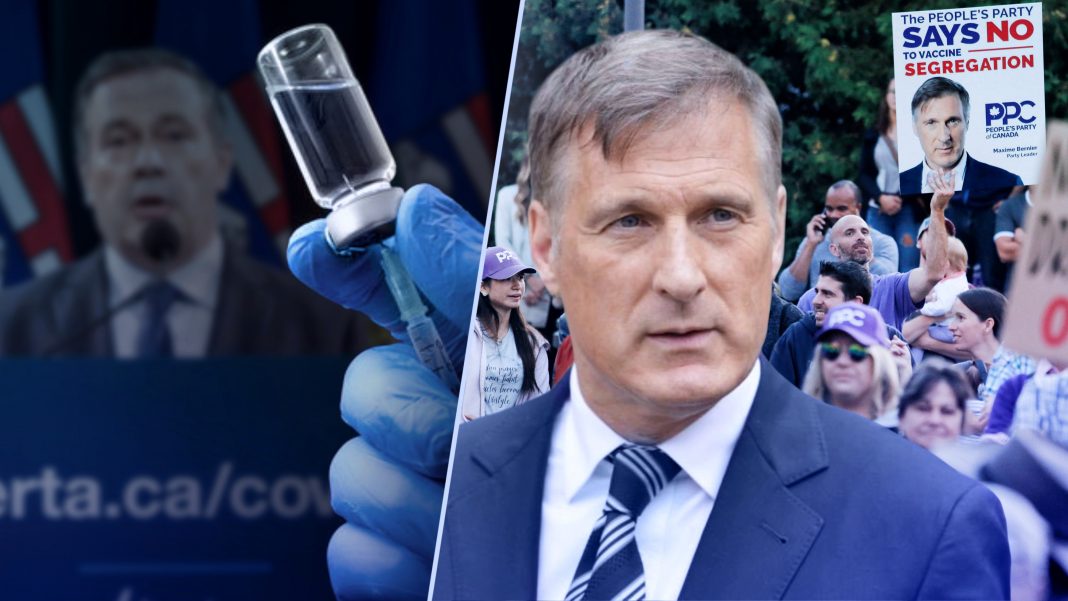 In a major Reversal, Alberta’s Premier Jason Kenney on Wednesday announced that his Province will be implementing vaccine passports.

“The decision not to get vaccinated is not just a personal choice,” Kenney insisted Wednesday, “it has real consequences for our whole society and the ability of our hospitals to cope. That is why the government has reluctantly decided to adopt the ‘Restriction Exemption Program,’ a proof of vaccination program for participation in certain discretionary activities that have a higher risk of viral transmission.”

This comes despite the Premier’s insistence over recent months that no such vaccine mandate would be implemented in Alberta. Even stating that should the government force a federal vaccine mandate, he would intervene to protect Albertans.

Further, Kenney has also acknowledged in the past vaccine passports would be technically illegal under Canadian Law, specifically the Health Information Act and the Freedom of Information and Privacy Act which protects citizens’ right to keep their medical information private.

“I had already committed not to introduce proof of vaccination because of concerns I had around privacy rights,” Kenney explained at the press conference. “But we must deal with the reality that we are facing.”

In July, Kenney, in a video, swore “to God” that the Province is “open for good” and will not be locking down again.

Under the new rules, not only will unvaccinated Albertans be barred from “non-essential spaces,” but also from gathering together privately in homes.

Maxime Bernier, the Leader of the Peoples Party of Canada, blasted the Premier in response, stating: “Jason Kenney has just declared war on our Charter of rights and freedoms. I will be in Alberta this weekend for the last stretch of the election campaign to join Albertans in their fight against this despot.”

With the addition of Alberta, all Canadian provinces have now implemented or have set dates to implement the controversial Vaccine passport requirements.

This excludes the three Canadian territories which make up about 0.3% of Canada’s overall population. The Yukon, Northwest Territories, and Nunavut have all stated that they will not be introducing Vaccine Passports until they are implemented at a federal level, likely because of the low population of these far north regions.

The mandates have sparked widespread protests across the country, including in Alberta, which the Premier disregarded as an “outrageous small minority.”

Across the world, many have expressed concern about the seemingly political and unscientific nature of the vaccine mandates.

Many of the protesters in Canada, which is in the midst of a federal election, have been seen holding signs of support for the “Peoples Party of Canada” whose leader, Maxime Bernier, is the only candidate for Prime Minister that opposes vaccine mandates.

It is important to note that although Bernier’s widening support is clear, the Liberal government-funded Canadian media has continued to ignore the candidate and exclude him from news reports and interviews.

The Canadian Debates Committee, newly installed by the Liberal Government under Justin Trudeau, has also denied Bernier the opportunity to take part in the election leaders’ debates. This forced Bernier to do his own “debate debrief” in order for Canadians to understand his stance on the issues and to share his reaction to the other candidates.

During the debate debrief, Bernier, explain that the debate for his own riding of Beauce, Quebec, also faced controversy. That is because his so-called “conservative” opponent refused to debate him due to Bernier’s unvaccinated status. It was then decided Bernier would be segregated from the rest, and debate in a separate location.

Conservative media in Canada were also banned from the debates. Rebel News took the issue to court, where the judge agreed the debates commission was wrong to have excluded them. That didn’t end up mattering, however, because the Candidates at the leaders’ debates refused to answer any questions from the media group, citing their promotion of “misinformation” regarding COVID-19.

This also comes as Facebook appointed the government-funded CBC as their “fact-checkers” for the 2021 election, to stop the spread of “disinformation.”

The efforts to suppress information and political candidates based on chosen coronavirus narratives shows an incredible level of corruption and election meddling, that should be considered unacceptable in a democratic society.

As Maxime Bernier recently stated, what we are witnessing is the beginning of a communist-style “show me your papers’ society.”

As Professor of Ethics Julie Ponesse, recently explained in an eye-opening interview with Bernier, we are witnessing the early stages of losing our democracy:

“I think our radar should really be in tune to the fact that something is going on here,” Ponesse explained. “The government wants vaccination for political reasons and not necessarily just immunological ones and that’s when we have to be really worried.”

“I hesitate to say, I’m sorry to say, but so much of what we’re seeing in Canada now this kind of stratification of citizens, fear-mongering by our governments,” she continued, “this is the early stages of every other state in history we have seen that has degenerated from a democracy or a republic to a kind of autocratic state or a dictatorship. We’re seeing the early signs of that. The people, we need to be on guard for this. We need to be aware so that we prevent sliding into it even further.”

This is again the reason why it is vitally important for Christians to vote Biblically.

Harbingers Daily’s Editor in Chief, Breanna Claussen, suggests the “only option” for Christians and Conservatives is Maxime Bernier.

“When you look at the People’s Party platform on the issues like assisted suicide, climate change, Covid Passports, lockdowns, or the economy versus the other candidates, you can plainly see that he is the only option for Christians,” she explained. “The Progressive Conservative Party and Erin O’Toole have sadly become conservative in name only. Bernier is the only one who will work to reverse this damage done to personal liberties, work to protect children, and bring an end to the corrupt media in the country.”

“Trudeau has spent an extraordinary amount of time and money pandering to globalists and their agendas. There is no guarantee this will be alleviated under O’toole,” she continued.

“In the Canadian national anthem, citizens ask God to keep their land glorious and free. How can Canada be glorious and blessed by God while it suppresses Biblical truth?” she warned. “How can God keep Canada free when the country has worked so actively to trample freedoms? If Canadians do not come out in droves to vote Biblically, God has every right to give over the nation to its desires.”

Adding, “We should all pray fervently for Canada and the outcome of this important election.”