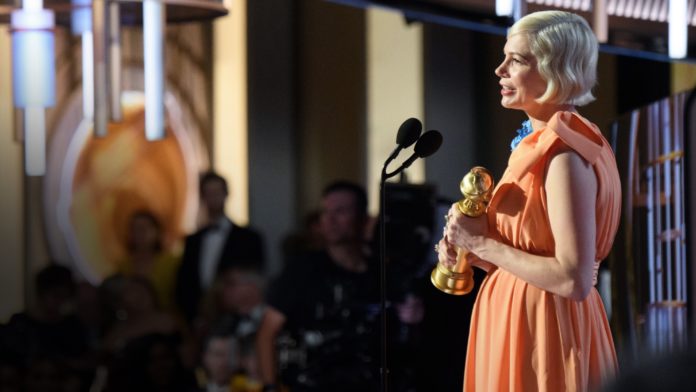 Urging women to act in their “own self-interest,” actress Michelle Williams thanked God for her “right to choose” abortion Sunday at the Golden Globes.

Williams won a best actress award for her role as Gwen Verdon in the TV series “Fosse/Verdon.” In her short two-minute speech, she chose to advocate for abortion and urge other women to do the same. Her speech was met with loud cheers and applause from her fellow Hollywood elites, according to Herald Planet.

Though she never used the word abortion, Williams credited her success to her so-called “right to choose.” She said she is grateful to live in a society that allows women the “choice” to abort their unborn babies, Slate reports.

“I’ve tried my very best to live a life of my own making, and not just a series of events that happened to me, but one that I could stand back and look at and recognize my handwriting all over—sometimes messy and scrawling, sometimes careful and precise, but one that I had carved with my own hand. And I wouldn’t have been able to do this without employing a woman’s right to choose: to choose when to have my children, and with whom,” she said to loud applause from the crowd of celebrities.

Williams also “thanked God” for the freedom to abort her own unborn children.

“I know my choices may look different than yours, but thank God or whomever we pray to that we live in a country founded on the principle that I am free to live by my faith and you are free to live by yours,” she said.

Concluding her speech, she encouraged women to vote in their “own self-interest” because “it’s what men have been doing for years.”

Contrary to what Williams claims, abortion does not empower women. It dehumanizes women and their unborn babies, treating both as less valuable simply because of who they are. It treats babies in the womb as disposable, even though they already are unique, living human beings from the moment of conception. And it treats women as weak, incapable of success unless they legally can kill their own unborn children for any reason up to birth. It treats a woman’s ability to nurture a child in the womb as a disease rather than a gift.

That is the opposite of empowering. Unborn babies deserve a right to life, and women deserve to be honored and encouraged when, planned or unplanned, they carry a child in their womb.