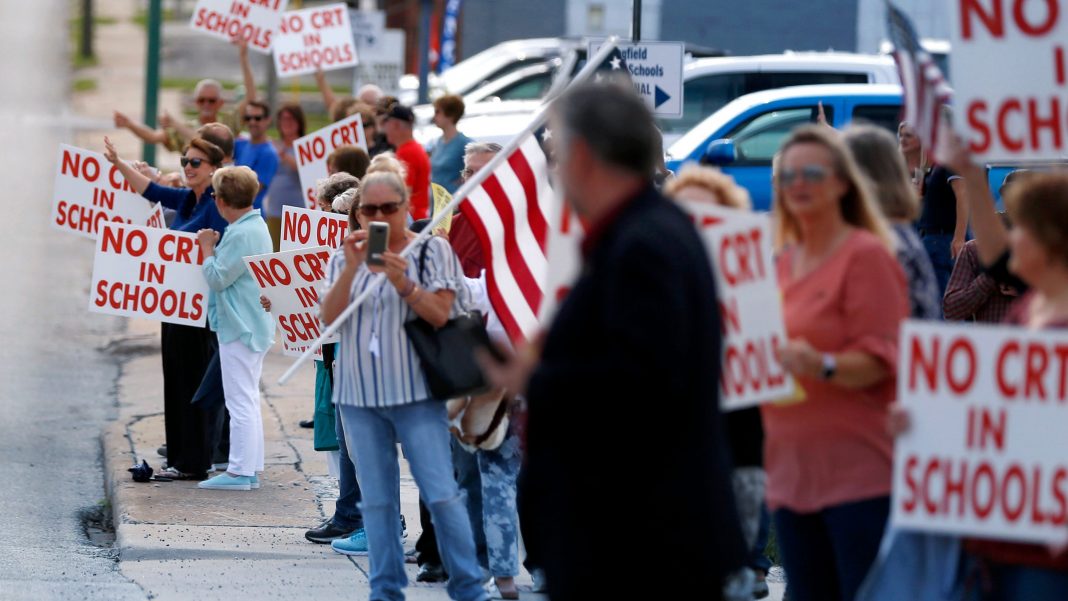 A Virginia Parent-Teacher Association (PTA) official resigned after she was seen on video at a protest making incendiary remarks about parents who oppose critical race theory.

The PTA, in a statement over the weekend, said that the PTA’s “executive committee requested and received the resignation of Michelle Leete, who served as Vice President of Training.”

“The actions & rhetoric of Ms. Leete & all of the like-minded partisan supporters of the SB are deeply disappointing. It evinces a deep lack of concern for children & parents, particularly where the wellbeing of children & families clash with political considerations,” reads a tweet from the organization.

Leete was recorded at a counter-protest criticizing those who oppose critical race theory (CRT), an offshoot of the European Marxist school of critical theory, being taught inside classrooms.

“Let them die,” Leete said, apparently referring to CRT’s opponents during the demonstration.

The Virginia PTA’s statement also sought to distance the organization from Leete, saying it doesn’t condone her words and added she wasn’t speaking in her capacity as a high-ranking member of the state’s PTA. Leete is also an executive within the Virginia NAACP.

In recent months, parents around the United States—particularly in Virginia’s Fairfax and Loudon counties—have taken up arms against teachers who use curriculum that borrows from CRT, the closely associated “antiracist” movement, and the similarly aligned “1619 Project.”

Opponents say the ideology foments communist class struggle along racial lines and will lead to catastrophic consequences, while proponents have attempted to separate CRT from Marxism and says that it provides a more accurate interpretation of U.S. and colonial history.

“An outgrowth of the European Marxist school of critical theory, critical race theory is an academic movement which seeks to link racism, race, and power,” says Legal Insurrection’s Criticalrace.org website, noting that it radically departs from the earlier Civil Rights movement.

CRT, notably, attempts to “challenge the very foundations of the liberal order, such as rationalism, constitutional law, and legal reasoning” and its proponents argue that nearly all aspects of American politics, social life, and economic systems are founded on race, the website says.

Universities and public schools have gone a step further, however, according to Legal Insurrection’s site, which has compiled the actions that school officials have recently taken to promote CRT or closely aligned movements.

According to the website, a number of schools have started essentially forcing students to undergo diversity, antiracism, and bias trainings; have changed admissions policies and standardized testing; changed curriculum requirements; implemented disciplinary measures that prevent academic freedom; have renamed buildings, and more.

HD Editor’s Note: Why Is The News Biblically Relevant?

Ken Ham, discussing the dangers of “Critical Race Theory”, explained that the only way to understand humanity is through the lens of Scripture:

Critical race theory (CRT) is rapidly infiltrating classrooms throughout America and the West… CRT is a worldview used as a set of lenses through which to interpret the world, but it spawns division, hate, and animosity. As believers, we should recognize the problems with CRT go deeper than that—it stands in direct opposition to the gospel and biblical teaching! As a Christian, everything needs to be interpreted through the lens of Scripture!

People are waking up to the fact that “critical race theory” and other such teaching is actually discrimination against, & in many cases hatred of people with lighter shades of melanin (the brown pigment in our skin). “And he made from one man every nation of mankind to live on all the face of the earth” (Acts 17:26). There’s always been racism for different reasons, but there’s no doubt many politicians & academics are now fueling racism.

Franklin Graham commended the parents in Virginia who have stood up to CRT, stating that what our children are being taught is “vitally important”:

In 2016 I went to all 50 states holding prayer rallies for our nation and I urged Christians to run for office in their cities and communities—specifically for school boards—and this is exactly the reason why! School boards are making decisions about what is being taught in our schools and the policies that will be followed. These impact our children and our grandchildren’s lives, and they impact the future of our country, so it is vitally important. I’m thankful for the parents in Loudoun County, Virginia, who are speaking up and working to keep things like critical race theory and concerning transgender policies out of their schools. We have to stand up against the godless socialist agenda trying to divide us and take over this country.
Pray for the Christians in Loudoun County, that they would stand strong and speak the truth in love. And pray about how you can get involved in your city and make a real difference. Will you?