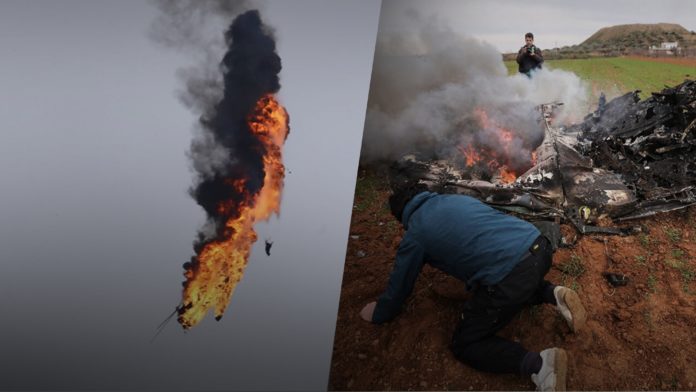 Syrian rebel opposition forces, which are backed by Turkey, shot down a Syrian government helicopter Tuesday over the northwestern town of Nairab, located south of Idlib city, killing the two crew members aboard, according to reports.

This comes a day after five Turkish soldiers were killed by Syrian government forces in northwestern Syria, according to Reuters, escalating clashes across the region as Syrian President Bashar al-Assad aims to seize control of a strategic highway linking southern and northern Syria for the first time since 2012.

Associated Press footage showed the helicopter spiraling from the sky and breaking up as fire poured from the fuselage, followed by the wreckage on fire after crashing.

Hours later, an airstrike hit Idlib, the provincial capital. Syrian Civil Defense, also known as White Helmets, said the attack killed at least seven people and wounded nearly two dozen. The Britain-based Syrian Observatory for Human Rights and Step news agency, an activist collective, estimated 12 civilians were killed in the airstrike, half of them children, and wounded about 30.

Opposition activists said the airstrike on Idlib, which is home to some 800,000 people, was carried out by government warplanes in response to the shooting down of the helicopter.

With backing from Russia, Syrian troops have been on the offensive for weeks in the last rebel stronghold in Idlib province and parts of nearby Aleppo. About 700,000 people have fled their homes, surging north toward the Turkish border, the Associated Press reported.

Tensions in the region escalated recently after two separate conflicts between Syrian rebels and the government forces, which killed 13 people on each side, including five Turkish soldiers.  In a speech Tuesday in Ankara, Turkish President Recep Tayyip Erdogan warned the Syrian government that it will “pay a very, very heavy price” for attacks on Turkish troops.

“We have given the necessary response to the Syrian side at the highest level,” Erdogan said. “They found the trouble they were looking for in Idlib. But it’s not enough. It will continue.”

Hundreds of civilians have been killed in the latest fighting, according to the United Nations. Over the course of the now nine-year conflict, nearly a quarter of the 3 million people from Idlib and surrounding areas have fled north. Turkey, which is a main backer of the Syrian opposition, has sent hundreds of vehicles into Idlib apparently to prevent government forces from reaching the border areas with Turkey. The country is home to some 3.6 million Syrian refugees and has concerns of more flowing into its border.