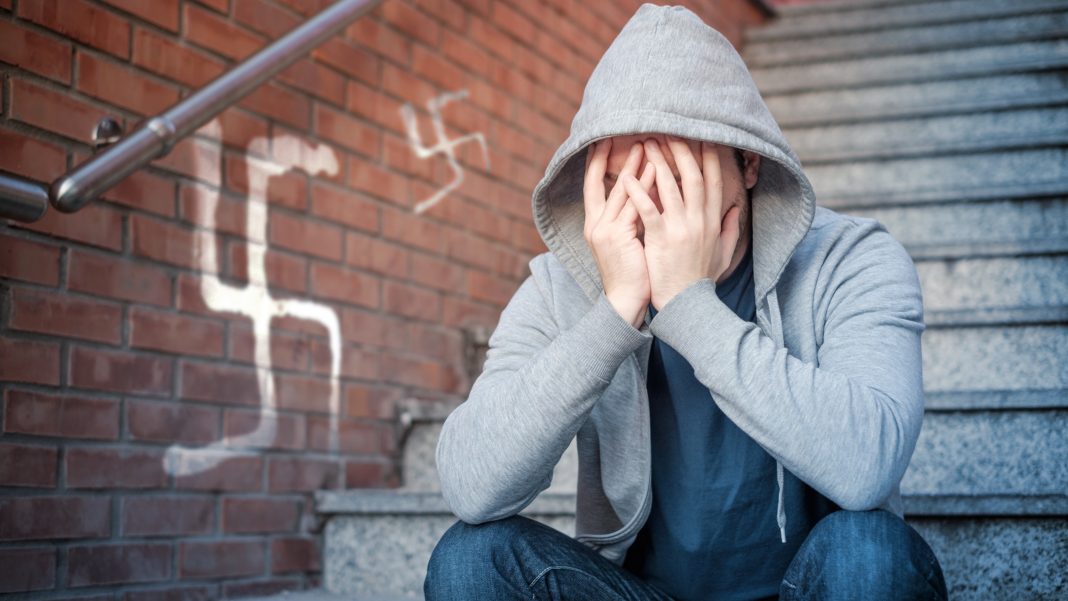 Nearly all Jewish college students and alumni who participated in a recent survey by Alums for Campus Fairness said antisemitism is a problem on college campuses, with three-fourths describing it as a “very serious” issue.

Among the 312 enrolled students and 194 alumni from different Jewish affiliations who took part in the survey, released on Monday, 95% said antisemitism was a problem on their current or former campus.

Some of the respondents in the ACF survey shared their firsthand experiences with campus antisemitism, which included Holocaust comparisons, Jewish stereotyping and the use of antisemitic tropes. Negligence on the part of the school administration was “consistently cited,” ACF said.

The full report showed that of the 137 personal anti-semitic accounts provided by the students, 50/137 referenced Israel, Palestinian, or BDS and 26/137 reference the Holocaust, swastikas, Nazis or Hitler. Harbingers Daily has selected 15 separate personal stories from Jewish students to highlight (included at the bottom of the HD Editor’s Note).

The Alums for Campus Fairness, released a video, compiling some of the shocking information the survey uncovered:

Below are 15 individually selected personal stories of antisemitism provided to Alums for Campus Fairness.

“3 of my fraternity brothers were walking home from the bars one night and right outside their house they got jumped and beaten up by members of another fraternity for the sole reason of them being Jews.” –– Male, 23, Graduated from a state university/college in the Southeast

“I’ve had pennies thrown at me people saying ‘you gonna pick that up jew?’” –– Male, 26, Graduated from a state university/college in the Southeast

“I was having a conversation with a guy in my dorm and when I mentioned I was jewish he made a joke about gassing me and when I explained that it was hurtful and not funny he spit on me” –– Female, 20, ” Currently attends a state university/college in the Midwest

“A student used our university’s official Instagram accounts to call Jewish students colonizers and demand they delete pro Israel stuff, even if it was something as unbiased as “2;000+ rockets launched at Israel” and, when reporting to the school, they did nothing to punish him.” –– Female, 23, Graduated from a private university/college in the Southwest

“A situation happened at my school in which my name was released resulting in me getting anonymous death threats full of horrible antisemitism. The school refused to acknowledge any of it including them releasing my name. They said I could go to the police; but all I needed was the school to take accountability.“ ––  Female, 22, Currently attends a private university/college in the Northeast

“One night after coming home from a Cross Country meet I went back to my room to find my roommates had a friend over. Before I knew it he was talking about how Hitler wasn’t such a bad guy and the number of Jews killed in the Holocaust was exaggerated. I then said “you know I’m Jewish right?” And he responded “yeah I could tell from the moment you walked into the room.” –– Male, 24, Goucher College

“I have too many to list. Swastikas and “SS” symbols litter the campus. I get asked if I’m a Zionist upon people learning I’m Jewish to determine if I am a “good” Jew or not. A girl in my class said we need to “stop demonizing Hitler” so we can understand him and his motives better… Cardboard cutouts of gravestones with names of Jewish leaders on them as a protest of “Israel.” I could go on.” –– Female, 26, Currently attends a state university/college in the West

“I haven’t but I know it is such a major problem and I often have to hide being Jewish to fit in and so my professors can like me. I also sometimes feel that I’m the spokesmodel for Jewish humanity at my school.” –– Female, 22, Currently attends a state university/college in the Midwest

“I go to a small liberal arts college with a large international population. Let’s just put it this way–the only Israeli student we’ve ever had left after a year because they felt physically unsafe on campus. The multiple Palestinian students feel right at home here however with BDS stickers on many of the buildings. The Jewish population is quickly shrinking on campus despite the Jewish student union being the most active
group on campus to make events that center around feeding others.” –– Female, 23, Currently attends a private university/college in the Midwest

“A professor, when discussing the Jewish Diaspora in ancient Babylonia, said that “It seems that the Jewish version of this history may be distorted to make it seem worse than it was, as unsurprisingly many Jews were wealthy while in Babylon.” –– Female, 20, Currently attends a state university/college in the West

“Someone used the word Kike as a funny word in a college wide presentation, and refused to apologize for it because he, a Black man, said I needed to focus more on the struggles Black people face than Jews. The student body President told me all Jewish men look alike and are ugly, also used to tell everyone I was rich (I wasn’t) and traveled out of country a lot (never have). She also held up a bag of bagels once yelling “look I’m more Jewish than you.” ––  Female, 23, Graduated from a private university/college in the Southwest

“One time I asked my accounting professor if I could please move my exam because of religious holidays (Rosh Hashanah), he answered back by saying “do you think I should change my schedule because of you being jewish?” I answered, “No, I am just politely asking for an extension or a new date since I won’t be able to complete the exam the day you have set for it.” He didn’t hesitate and answered, “I already told you that I am not jewish and I won’t change your exam.” After this the only option left for me was to talk to the head of accountancy. So, I went on told her the situation, and without thinking twice she told me, “of course the professor should give you a new date to complete your exam because of your religious holidays, and btw jag sameaj” It turns out the head of department is Jewish and she right away let the professor know of her answer regarding the moving for my exam. I completed my exam right before Rosh Hashanah. After the jag I was eager to see what I scored on the exam. I went to class the following morning and for my surprise I had failed the exam. I asked the professor and he told me “I didn’t have time to correct your exam, and I guessed what grade you deserved.” I politely answered him back, “Ok, I understand is there any way we can sit together and go over it?” The professor eagerly answered back to me “as you changed my schedule because of your jewish holiday, I am not willing to grade your work.” I ended dropping the class and getting a 4.0 the second time I took the course, but obviously with a different professor.” –– Male, 20, Currently attends a private university/college in the Northeast

“Professors often made out of hand comments that supported antisemitic conspiracy theories against Israel, such as that Israelis harvest Palestinian organs or use Palestinian children as target practice.” ––  Female, 25, Graduated from a private university/college in the Southeast

“Someone at my school posted a video about all the reasons why the Holocaust was a good idea, nothing has happened to him yet.” ––  Female, 19, Currently attends a private university/college in the Northeast

“In a required Freshman training class, a student repeatedly made violently antisemitic comments during diversity training week and after. Me and my friends nicely asked him to stop and explained the harm in what he was saying. He did not care. I informed the professor who handled it in class publicly and both of us filed reports. He yells “SHALOM” at me every time he sees me on campus. He is a student government representative. This was the first of many incidents I have experienced.” –– 21, Currently attends a private university/college in the Southeast