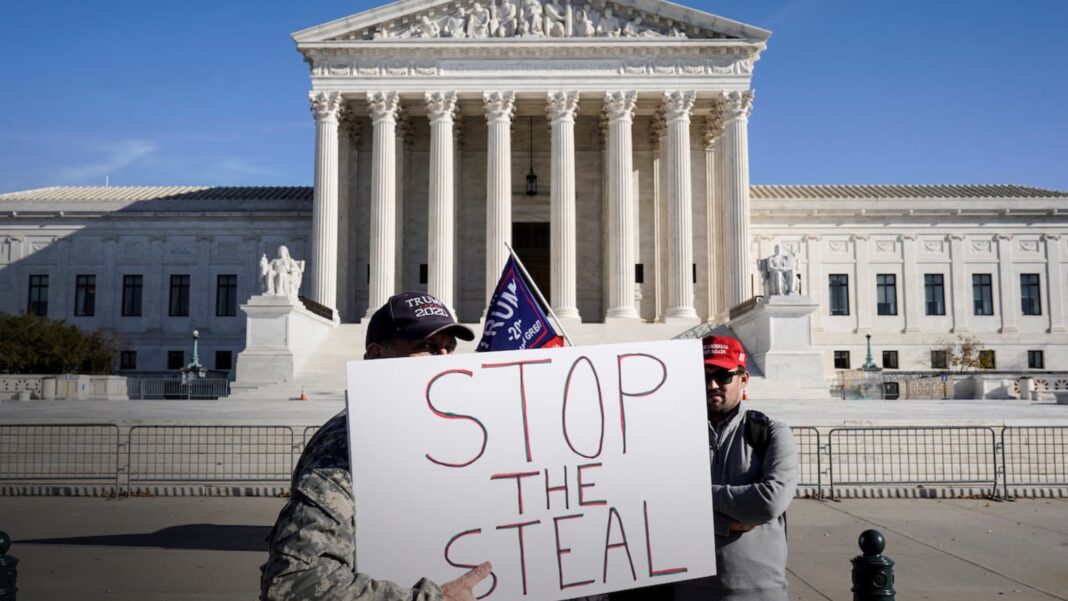 The latest Trump campaign appeal to the Supreme Court won’t see any action from the justices until after the inauguration.

The justices this week set a reply deadline for Pennsylvania Secretary of State Kathy Boockvar and the other respondents named in the case of Jan. 22. The campaign had asked for the Supreme Court to order those on the other side of the litigation to respond by Wednesday and have reply briefs from the Trump campaign submitted by Thursday. It also asked the court to rule by Jan. 6. But the court did not oblige.

This means that by the time Boockvar and the others the Trump campaign is seeking to take to the Supreme Court even respond to the petition, Joe Biden will already be sworn in.

At that point, the court could simply decline to hear the case, saying it is moot or impossible for them to resolve at that point. Congress will have already counted electoral votes and certified the next president — that meeting happens on Jan. 6. The Trump campaign, however, argued in its brief that even Inauguration Day would not make the court “moot” because such issues could happen in the future, and therefore the court should resolve them ahead of time.

The Trump campaign, in a statement over the weekend when it announced the petition, cited a statement from Justice Samuel Alito in which he cast doubt on whether it was constitutional for Pennsylvania to have its judicial branch make changes to laws governing the presidential election.

“This petition follows a related Pennsylvania case where Justice Alito and two other justices observed ‘the constitutionality of the [Pennsylvania] Supreme Court’s decision [extending the statutory deadline for receipt of mail ballots from 8 pm on election day to 5 pm three days later] … has national importance, and there is a strong likelihood that the State Supreme Court decision violates the Federal Constitution,'” Trump lawyer Rudy Giuliani said.

The Trump campaign did not reply to a request for comment on Thursday.

The Trump campaign is seeking to have the justices overturn three Pennsylvania Supreme Court decisions on signature verification, canvassing observation and specific requirements for how voters must fill in mail ballots.

“As described above, non-legislative officials, oftentimes at the instigation of partisan third parties, ignored or significantly altered and thereby violated state election law, including, most troublingly, laws enacted to minimize the risk of fraud in mail voting and thereby protect the integrity of the election process,” the Trump campaign lawsuit reads.

It continued: “The decisions of the Pennsylvania Supreme Court, an elected body, also raised serious concerns whether these were partisan attempts to assist the Democratic candidate whose campaign strategy of utilizing mail ballots was well publicized, in comparison to President’s Trump’s well-known strategy to encourage in-person voting.”

If the court were to rule in the Trump campaign’s favor, the petition specifically raised the possibility that Pennsylvania could re-certify its current results “if, and only if, they can establish the validity of a sufficient number of the mail ballots to sustain the existing certification.”

If that is not possible, the campaign said, the state legislature could step in.