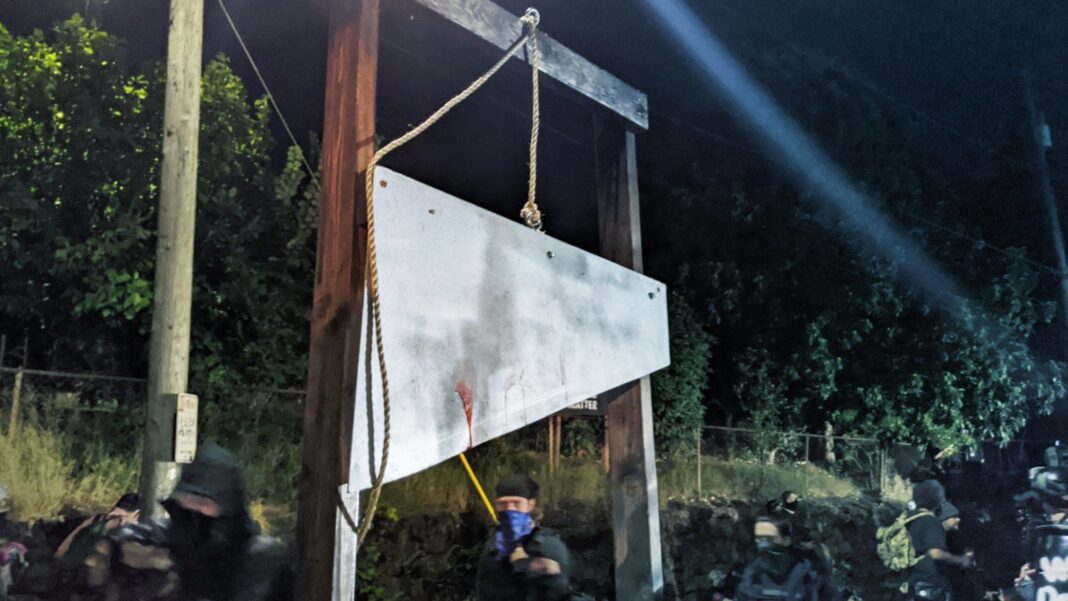 Rioters in Portland, Oregon, brought a guillotine to a violent demonstration overnight Saturday into Sunday, according to the Portland Police Bureau.

“Someone rolled a mock guillotine with a stuffed bear into the street (photo). The bear and multiple U.S. flags were burned. Paint balloons were launched at officers, as well as green lasers,” the police said in a press statement early Sunday morning.

It was only the latest provocation after riots that began during the day and lasted through the night.

Left-wing rioters targeted police with projectiles, including rocks and balloons filled with feces, according to police:

Another riot later took place, according to police, in which projectiles and rocks were again launched at police:

Individuals in the crowd threw rocks, eggs, and glass bottles in the direction of the officers. There were no injuries. The sound truck was also targeted by individuals. It was struck by eggs and rocks.
…

At 11:45p.m., officers began to push the crowd to the west. Rocks, bottles, and other hard objects were thrown at officers. One lieutenant was struck in back of head with a glass bottle. His helmet prevented him from being injured. A Portland Fire and Rescue Medic embedded with one of the squads was hit in the shin with a large rock (photo). He suffered a minor laceration to the leg.

At 11:59p.m., due to the life safety danger, a riot was declared. More warnings were issued from the PPB sound truck. The sound truck was struck and damaged by rocks and eggs (photos). The rear window of a vehicle used to transport a Rapid Response Team squad was shattered (photo) by a rock. Numerous officers reported seeing individuals bearing “press” insignia throwing rocks at them.

The guillotine appeared to have been an attempt to intimidate police.

Fourteen arrests were made, police reported.