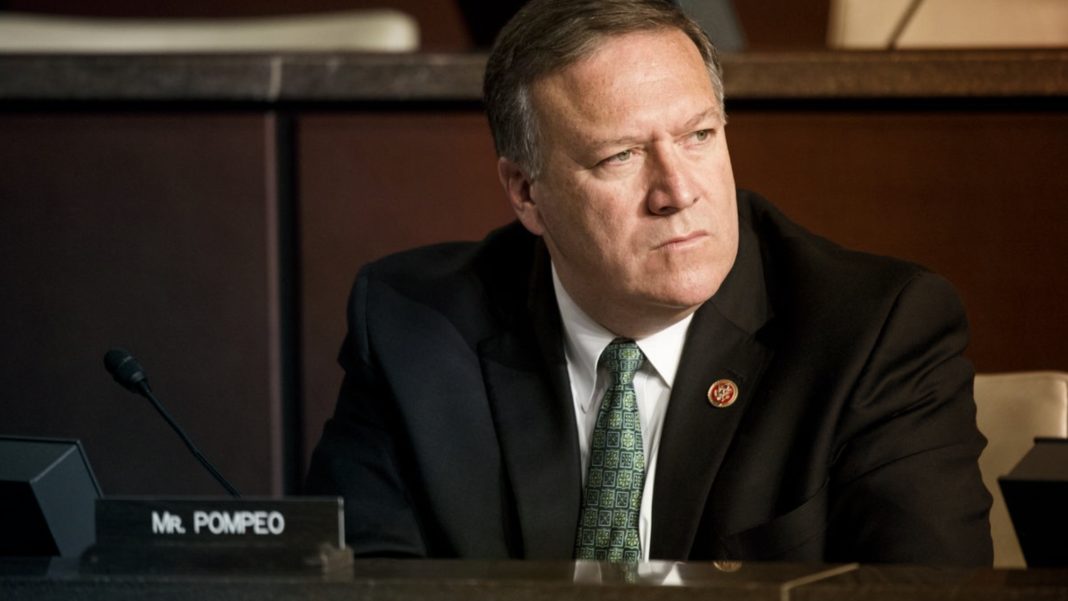 On June 6, 1944, Allied troops stormed the beaches of Normandy, France in the greatest amphibious invasion in history. Secretary of State Mike Pompeo said in an interview with the Daily Caller that understanding the lessons from D-Day is important in today’s global environment.

“The shape of the world today, the freedom we have, the strong sense, that the ideas that the American Founders put in the heads of all of us as Americans,” Pompeo told the Caller. “They were vindicated through the efforts of American forces when tyranny came, when the bad actors had taken over Europe and were on the verge on taking over the world in this great, global conflagration, those people who believed in democracy, those people who believed that our rights were God-given and came from Him, prevailed.”

Secretary Pompeo said that he was proud to be a Kansan like Gen. Dwight D. Eisenhower, who orchestrated the D-Day execution.

Secretary Pompeo added, “it impacts us today, it shapes us today … successfully vindicated the central tenants of the world that exist today. The idea is that human beings have dignity because of their humanness and that individual freedom and human rights are the proper way for governments to behave.”

The reason D-Day happened is because Germany seized France. Currently, China is tightening its grip on Hong Kong as it seeks to become the single, greatest world power, which, in a way, is comparable to Germany’s actions during the Second World War, Pompeo said.

“The promises that the Chinese Communist Party had made in their treaty with the United Kingdom that they broke when they made the decision to deny Hong Kong people the freedoms that they had been promised were similar to some of the promises that were broken back in the days when Germany advanced against the rest of Europe,” he said.

Secretary Pompeo emphasized that the U.S. has “an obligation to work diplomatically with the Chinese Communist Party, to work to make sure we protect Americans in every way that we can.”

“D-Day reminds us of the costs when we engage in conflict and the way that we did back those many years ago. It reminds me as the secretary of state today my absolute obligation to exhaust all possibilities before we ever find ourselves in a place where we have to put young men and women at risk in order to achieve the efforts to secure America’s freedom,” he added.

President Trump announced last Friday that the U.S. will “make clear our expectations that China change its course, that it return to the status quo, where the freedom that they had promised to the people of Hong Kong would be provided to them,” Secretary Pompeo explained.

Secretary Pompeo believes China may pass a controversial security law that has sparked unrest and protests throughout Hong Kong. Furthermore, “if [China were to] delay or cancel the elections that are scheduled for September of this year, they will have made a fundamental breach not to just the United States, but on their promises, their promises to the United Kingdom and the world.”

The nature of modern warfare makes it unlikely that the world will ever see another massive frontal assault like it did on D-Day, leading to questions about where the front lines will be and who or what will be on the other side of combat.

“There’s no doubt that technology has fundamentally reshaped the way warfare has been engaged,” Secretary Pompeo explained. “Even over the past 15 years, you’ve seen it. You’ve seen more cyber activities, cyber activity by state actors, and nonstate actors, as well. You can see the ever-increasing militarization of space with satellites that can now provide detailed imagery for militaries around the world. So, it’s true – as time changes, militaries change.”

Secretary Pompeo graduated first in his class from the United States Military Academy at West Point in 1986. The Secretary reflected on his time as an Army officer and the importance of different weaponry even today.

“But, make no mistake about it. Some of the tools, I was a soldier once, M1 tanker, those tools still matter. You see nations continue to build out their conventional weapon systems, as well, for conflicts that take that shape.”

Secretary Pompeo added that the U.S. is trying to get the Chinese into an arms control discussion.

“It is absolutely true that there is ever-greater risk and as the capacity for nuclear weapons and capabilities expand … there is increased threats to the world and we need to be mindful that those threats can be potentially devastating not only for a city, a town, a state, or a country but for the entire world,” he said.

The Trump Administration has been working to further advance the significance of the victories seen on D-Day, the secretary explained.

“In every element of what President Trump and our team have tried to do on national security has been deeply consistent with what the team that invaded on D-Day was aimed to achieve,” Secretary Pompeo explained. “Whether it’s our effort of protecting religious freedoms, something that’s been at the center of what this administration has sought to achieve, or efforts to enforce the central idea of national sovereignty where each country gets the right to make decisions for itself in a way that reflects its own history, but do so in a way that is not cost imposing on other countries.”

Antifa Could Be Branded as Domestic Terrorists Under New Montana Bill

The move would “send a message that we as a state won’t tolerate a group like this coming into our state“ Montana Rep. Braxton Mitchell said.
Read more
Asia