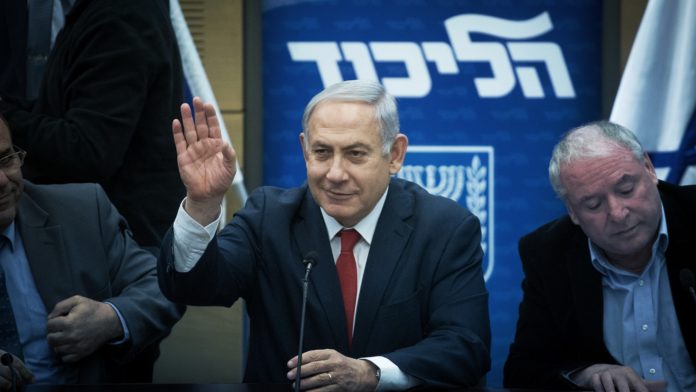 The Likud party’s central committee voted Thursday night for a resolution affirming that Prime Minister Binyamin Netanyahu will be the Likud’s one and only candidate for the premiership during the 22nd Knesset.

Roughly 300 central committee members took part in the vote, which resulted in a unanimous decision to back Netanyahu, providing a show of strength for the prime minister as talks for forming a coalition government remain deadlocked, with no resolution sight.

The measure, which was drafted by MK Haim Katz, affirmed that the Likud party, which won 32 seats in the September election, will only back Netanyahu as the party’s candidate for the premiership.

“The central committee approves that Likud chairman and Prime Minister Binyamin Netanyahu…is the candidate of the Likud movement for prime minister of Israel, and he is the Likud’s candidate for the entire duration of the 22nd Knesset,” the measure reads in part.

“During the term of the 22nd Knesset, the Likud will be a partner only with a government led – either entirely or for part of the term in a rotational arrangement – by the Likud chairman and candidate for the premiership, Binyamin Netanyahu.

The resolution bolsters Netanyahu’s position within the Likud, amid pressure from the Blue and White party to form a unity government with the Likud – but without Netanyahu at the helm – and hints that MK Gideon Sa’ar (Likud) could challenge Netanyahu for leadership of the party.