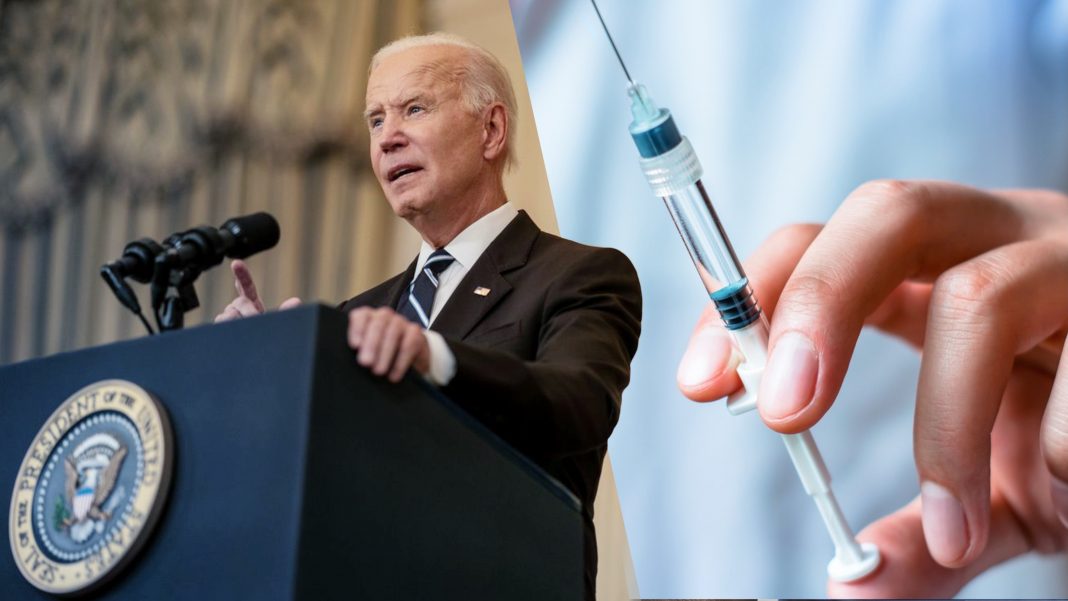 President Joe Biden is cracking down on unvaccinated Americans in a broad attempt at exerting executive power over private businesses. His sweeping new mandates will now require vaccination for not only federal employees and any contractors who do business with the federal government, but also private companies and their employees.

“The Department of Labor is developing an emergency rule to require all employers with 100 or more employees, that together employ over 80 million workers, to insure their workforces are fully vaccinated or show a negative test at least once a week,” Biden said during a speech on Thursday.

One out of every four Americans who is eligible to be vaccinated still hasn’t gotten the shot, and the president clearly took aim at them, blaming those U.S. citizens for the current state of the pandemic.

“We’ve been patient, but our patience is wearing thin and the refusal has cost all of us,” said Biden.

South Dakota Gov. Kristi Noem tweeting: “My legal team is standing by ready to file our lawsuit the minute Joe Biden files his unconstitutional rule. This gross example of federal intrusion will not stand.”

And a similar message from Arizona Gov. Doug Ducey:  “This is exactly the kind of big government overreach we have tried so hard to prevent in Arizona — now the Biden-Harris administration is hammering down on private businesses and individual freedoms in an unprecedented and dangerous way. This will never stand up in court.”

Rep. Lauren Boebert said the political debate over COVID is ultimately shaping up to be a battle for freedom in America.

Just last December, President-elect Biden said he would not demand the vaccine be mandatory. Now, the White House says the president’s position has needed to change along with the virus.

“Obviously information, data evolves and the steps we need to take to address, to get the virus under control, to help people return to normal has to evolve as well,” White House Press Secretary Jen Psaki told reporters during Thursday’s press briefing.

The president is also calling for regular COVID testing at all schools.

Meanwhile, the Los Angeles Board of Education is taking that one step further, voting on Thursday to require students 12 and older to be vaccinated in order to attend in-person classes.

‘There Needs To Be Action Taken To Protect The People’

During Biden’s address, he also claimed that the issue of vaccination mandates is “not an issue of freedom or personal choice,” and reiterated that what America is facing is a “pandemic of the unvaccinated.”

Many are pushing back against the newly announced mandates. Ben Shapiro, in an interview on Fox and Friends, declared that his company Daily Wire would “use every method and resource at our disposal to defy the president’s unconstitutional order.”

“We are staffing up right now on the legal side,” Shapiro explained. “We are already getting any lawsuit ready that needs to be gotten ready. We have to see the actual regulations, know the details of that lawsuit. What we can tell you is that the provisions that Joe Biden is going to be citing under OSHA are wildly overbroad. And frankly, I think that he’s made a huge tactical legal blunder here. I think that there’s every possibility that something like this goes to the Supreme Court level, and suddenly we see a complete rewriting of the administrative state because Joe Biden couldn’t get his act in order, and so he decided to issue a tyrannical and authoritarian order here.”

Texas Governor Greg Abbott responded to Biden’s new vaccine requirements, calling it a “power grab” and assuring his state that they are “already working” to protect Texans’ right to choose.

“Biden’s vaccine mandate is an assault on private businesses,” Abbott Tweeted. “I issued an Executive Order protecting Texans’ right to choose whether they get the COVID vaccine & added it to the special session agenda. Texas is already working to halt this power grab.”

Arizona Governor Doug Ducey responded, stating, “This is exactly the kind of big government overreach we have tried so hard to prevent in Arizona — now the Biden-Harris administration is hammering down on private businesses and individual freedoms in an unprecedented and dangerous way. This will never stand up in court. This dictatorial approach is wrong, un-American and will do far more harm than good. How many workers will be displaced? How many kids kept out of classrooms? How many businesses fined? The vaccine is and should be a choice. We must and will push back.”

South Carolina Governor Henry McMaster, tweeted, “The American Dream has turned into a nightmare under President Biden and the radical Democrats. They have declared war against capitalism, thumbed their noses at the Constitution, and empowered our enemies abroad. Rest assured, we will fight them to the gates of hell to protect the liberty and livelihood of every South Carolinian.”

Florida Governor Ron DeSantis, who although not mentioned by name appeared to be directly scolded by President Biden in his speech, stated at a press conference earlier today that he will work to fight back and stand up for the constitution.

“When you’re taking action that’s unconstitutional, that threatens the jobs of the people in my state, many many thousands of jobs, I’m standing for them,” DeSantis assured. “We’re going to protect their jobs against federal overreach.”

“This is a guy who criticizes the state of Florida for protecting parents’ rights,” he continued. “He says school boards should be able to eliminate parents’ rights and force five-year-old kids to wear masks all day. That’s what he thinks is appropriate government. Yet here he comes from Washington DC instituting an unprecedented mandate, which even his own people have acknowledged in the past is not constitutional. That’s not leadership.”

The Florida Governor further stated that such mandates will be “very destructive for the livelihoods of many many Americans and obviously going to be destructive to our constitutional system and the rule of law.”

“These are times when you believe in that constitution and you got to stand up,” he asserted.

DeSantis then went on to explain that Vaccine mandates are “not based on science” because they disregard natural immunity and other reasons a person may choose not receive the vaccine. “You don’t know their history,” he insisted.

“It’s not based on science. He’s saying he’s losing patience with people… You know, at the end of the day, we don’t live with a one-person rule in this country. We live in a constitutional system in which people’s rights are respected. Particularly at this juncture their livelihoods and their jobs have to be protected… It’s totally counter-productive and I think it’ll ultimately lose in court. But before that, there needs to be action taken to protect the people of our state and hopefully of the entire United States. Nobody should lose their job based on this decision,” he concluded.