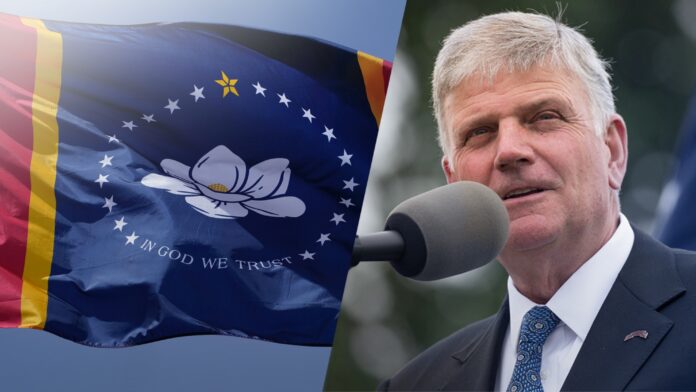 Mississippi voters will decide whether to accept a new state flag with a magnolia to replace an old one legislators retired under pressure because it included the Confederate battle emblem that’s widely seen as racist.

A commission on Wednesday voted to recommend the magnolia over one other final design that featured a shield with wavy lines representing water.

The single design will go on the November ballot. If voters accept the design, it will become the new state flag. If they reject it, the design process will start anew – and Mississippi will remain a state without a flag for a while longer.

Legislators shelved the Confederate-themed flag two months ago against the backdrop of widespread protests over racial injustice. The flag had been divisive for decades in a state with a 38% Black population. The final push for change came from business, education, religious and sports groups – including, notably, the Mississippi Baptist Convention and the Southeastern Conference.

By law, the new flag cannot include the Confederate battle flag, and it must have the phrase, “In God We Trust.” The public submitted nearly 3,000 designs.

Franklin Graham took to Facebook to comment on the flag and its “In God we Truth” motto:

Mississippi gets it. Their new state flag design contains the motto “In God We Trust.” While some try to take God out of as much as possible, it’s refreshing to see Mississippi taking this stand that will be seen for generations to come. It is only by God’s grace that we have been blessed as a nation and as a people. Remember, “Blessed is the nation whose God is the Lord” (Psalm 33:12).

I hope Mississippians will show their support for this important message in the November election.

The commission – with members appointed by the governor, lieutenant governor and House speaker – narrowed the choices to the final two last week. Creators of the final designs said their work reflects a love for Mississippi and a desire for a banner that a wide range of people can fly with pride.

The magnolia flag has the state flower on a dark blue background with red bars on either end. The flower is encircled by stars representing Mississippi as the 20th state. It also has a single star made of diamond shapes representing the Native American people who lived on the land before others arrived.