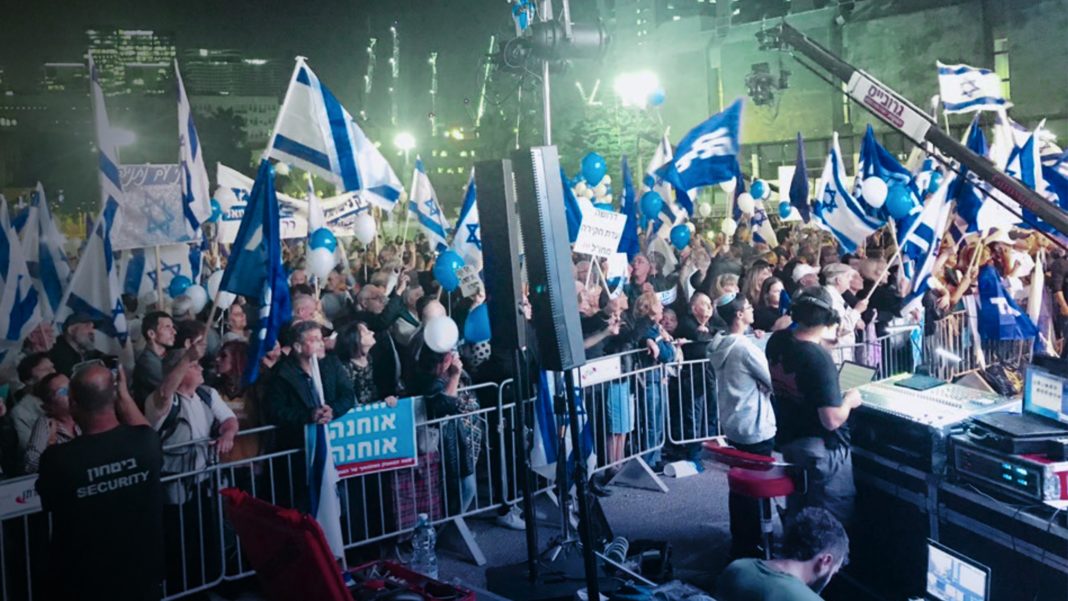 Some two thousand people are gathering ahead of a pro-Netanyahu rally outside the Tel Aviv Museum, which is set to officially begin at 8 p.m. under the controversial title “stopping the coup.”

Demonstrators are chanting slogans praising Justice Minister Amir Ohana and calling for State Prosecutor Shai Nitzan and prosecution official Liat Ben Ari to be arrested and investigated for their role in the criminal cases against the prime minister in which charges were announced last week.

Last Thursday, Attorney General Avichai Mandelblit, a Netanyahu appointee, announced he would charge the prime minister with breach of trust and fraud in three cases, and bribery in one of them. The announcement marked the first time in Israel’s history that a serving prime minister faces a criminal indictment.

Netanyahu slammed the charges, vowed to stay on and fight what he called “tainted” and prejudiced investigations, and accused police investigators and prosecutors of plotting an “attempted coup” to bring him down.

Tuesday’s rally, officially organized by a handful of right-wing organizations but promoted heavily by the Likud party and Netanyahu himself, appears to be echoing the premier’s message, with posters for the event calling on the public to come and “stop the coup.”

“There are places where there is a military coup and the military removes elected officials, and there is also a legal coup that takes place over the table in front of our eyes,” Simcha Rothman, a leader of the Movement for Governance and Democracy, one of the groups sponsoring the event, told Channel 12.

Rothman rejected the concern that the scheduled speakers at the rally, mainly representatives of the various groups involved, would incite violence against the law enforcement community. “This is not about incitement. We have a legitimate critique of fabricating legal cases,” he said.