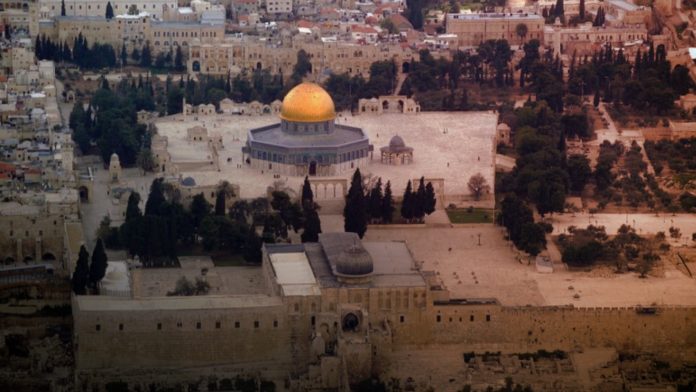 Hundreds of Muslims chanted about killing Jews outside the Al-Aqsa Mosque on the Temple Mount in Jerusalem on Friday morning, prompting police to disperse the crowd.

No one was injured in clashes with police, who broke up the impromptu march where the chants occurred.

In footage from the march, many men can be heard shouting in Arabic, “Jews, remember Khaybar, the army of Muhammad is returning.”

The cry relates to an event in the seventh century when Muslims massacred and expelled Jews from the town of Khaybar, located in modern-day Saudi Arabia.

They also shouted: “With spirit and blood, we will salvage Al-Aqsa” and “Jews, the army of Al-Aqsa is returning.”

Authorities said officers broke up a procession that included what they called “nationalistic” chants at the holy site, after some 8,000 people concluded morning prayers.

“Police will not allow disorderly conduct at the Temple Mount and will act to prevent any unrest or nationalist calls,” a statement from police said.

The Hamas terror group had on Wednesday called for Palestinians to “mobilize” during Friday’s prayers against the “defilement” of the Al-Aqsa Mosque and Hebron’s Tomb of the Patriarchs by “the Zionist occupation.” The group said Israeli authorities must be warned that “our sanctities are a red line that cannot be tolerated.”

On Friday it welcomed the unrest at the compound, with a spokesman saying the morning prayers “support our people in their campaign against the Zionist occupation and thwart its racist plans.”

Earlier this month police detained some 10 Muslim visitors at the compound after they disrupted public order.

The site is the holiest in Judaism as the site of the biblical Temples, and the third holiest for Muslims, who refer to it as the Al-Aqsa Mosque compound or the Noble Sanctuary.

It has been the scene of intermittent clashes between Muslim worshipers and police.

Under the 1994 peace treaty between the two countries, Israel recognizes Jordan as the custodian of the Temple Mount and Jerusalem holy sites.

Some Jewish activists have pushed for Israel to allow Jewish prayer on the Temple Mount as part of the country’s commitment to freedom of religion.

But any talk or even rumors of changes to the status quo arrangement at the holy site are typically met with vociferous protest from the Muslim world, which has accused Israel of attempting to “judaize” the site or expand access for Jewish pilgrims.