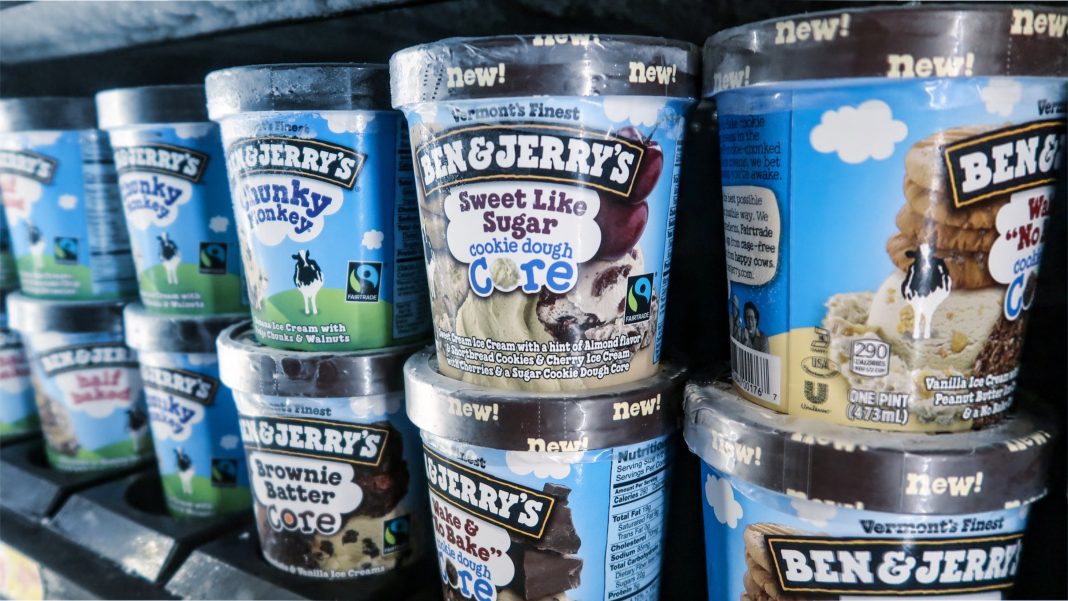 Ambassador Gilad Erdan called on 35 US states who hold anti-BDS laws to take legal action against “Ben & Jerry’s” after the company announced it would end sales of their ice cream in “Occupied Palestinian Territories.”

“I sent a letter to 35 Governors of US states that have legislation against the Boycott, Divestment, and Sanctions movement targeting Israel,” the ambassador Tweeted. “I urged them to act against [Ben and Jerry’s] decision to not sell its products in the eastern part of Jerusalem and Judea & Samaria. We will make clear to Ben & Jerry’s that its antisemitic decision will have consequences.”

In Ben and Jerry’s Twitter post that announced the end of sales in “Occupied Palestinian Territories,” the company claimed that selling in these regions was “inconsistent” with their “values.”

“This is a moral mistake and I believe it will turn out to be a business mistake as well,” he asserted. “Boycotting Israel — a democracy surrounded by islands of terrorism — reflects how they have completely lost their way. The boycott does not work and never will; we will fight it with all our might.”

The parent company, Unilever, in their statement announced that they would be ceasing sales to the stated region but continuing to do business with Israel. According to i24 News, Ben and Jerry’s board was not consulted on this portion of the statement, as they planned to make no mention of their continued business with the Jewish State.

“As Arab nations cancel their decades long boycott of the Jewish state and sign peace agreements with Israel, and cultural and economic cooperation in our region is growing, American companies with radical ideological agendas cannot be allowed to go against the policy of the United States and act against normalization and peace,” he added.

The ambassador then went on to remind the governors that Airbnb took similar anti-semitic actions in 2018. As a result, the company was met with lawsuits and several states taking action to enforce their anti-BDS laws. “These combined efforts were successful in getting Airbnb to reverse its discriminatory policy within a short period of time,” Erdan reminded the States, urging that similar actions need to be taken with Ben and Jerry’s.

Adi Schwartz, a fellow at the Center for International Communications at Bar-Ilan University, pointed out that in practical terms, “we know economically that BDS is a huge failure. There is no impact whatsoever on Israel’s economy.”

“With all due respect,” he continued, “there are a few other ice cream producers that will be very happy to replace Ben & Jerry’s in Israel, in the West Bank.”

According to Time Of Israel, Schwartz further called the move a “Propaganda tool” to stoke divisions between Israeli and American Jews.

The BDS movement has sought to make trendy the demonization and delegitimizing of the Jewish State. The movement, instead, promotes the support of Palestinian groups whose primary goal is to wipe Israel off the map through acts of terrorism.

In the Bible, we read in Genesis 12:3 and Numbers 24:9 that God Himself calls all to bless Israel, warning that those who seek to curse them will themselves be cursed.

Numbers 24:9 KJV – “He couched, he lay down as a lion, and as a great lion: who shall stir him up? Blessed is he that blesseth thee [Israel], and cursed is he that curseth thee.”

The Vermont-based ice cream company has prided itself on its “activism,” releasing flavors promoting homosexuality, Colin Kaepernick, and climate and racial “justice.” The company also released a flavor celebrating the “women’s march” back in 2018, calling for people to “join the movement” to “resist” the so-called “regressive agenda” of the Trump administration.

As a friend of the Jewish people and the State of Israel and in the name of our shared values of democracy and equality, I wish to bring an important matter to your attention and ask for your assistance.

Earlier today, July 19%, Ben & Jerry’s announced their intention to boycott hundreds of thousands of citizens living in Judea and Samaria. We view this decision very severely as it is the de-facto adoption of antisemitic practices and advancement of the de-legitimization of the Jewish state and the de-humanization of the Jewish people.

In addition to the great moral difficulties that derive from such a boycott, Ben & Jerry’s announced policy seems to also trigger potential legal ramifications, based on laws legislated by over 35 States, including your state, meant to counter these types of hate driven boycotts.

I believe today, as I did back in 2018 when I served as Israel’s Minister of Strategic Affairs, that rapid and determined action must be taken to counter such discriminatory and antisemitic actions. We must stand united and send an unequivocal message that this will not be tolerated.

As Arab nations cancel their decades long boycott of the Jewish state and sign peace agreements with Israel, and cultural and economic cooperation in our region is growing, American companies with radical ideological agendas cannot be allowed to go against the policy of the United States and act against normalization and peace. Moreover, the past has proven that the citizens of Israel are never the only ones who suffer from such boycotts as these significantly harm Palestinians as well. For example, in the supermarkets in Judea and Samaria where Ben & Jerry’s products are sold, both Israelis and Palestinians work and shop.

The BDS movement is not interested in promoting peace or a better future for the Palestinians, but rather in demonizing and discriminating against Israel, the one true democracy and America’s strongest ally in the Middle East.

Very similarly to the Airbnb case of November 2018, Ben & Jerry’s policy seems, as mentioned above, to also violate the anti BDS laws of many states, including the law of your own great state.

As a response to the policy change announced by Airbnb in 2018, several lawsuits were filed against the company both in Israel and in the United States, and several states spoke out and even acted to enforce their laws against the company. These combined efforts were successful in getting Airbnb to reverse its discriminatory policy within a short period of time.

I ask that you consider speaking out against the company’s decision, and taking any other relevant steps, including in relation to your state laws and the commercial dealings between Ben & Jerry’s and your state