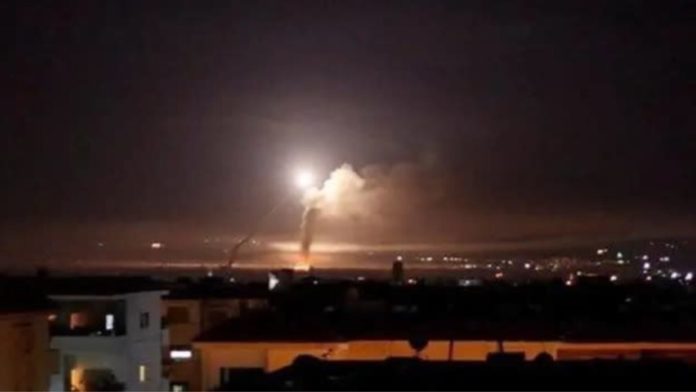 Israeli fighter jets carried out a wave of retaliatory air strikes against dozens of military targets belonging to the Iranian Quds Force (IRGC) and the Syrian army on Tuesday night in Syria.

Israeli Defense Minister Naftali Bennett said following the strikes that “the rules have changed: Anyone who shoots at the State of Israel during the day will not sleep at night. Like last week and now this week. Our message to Iran’s leaders is simple: You are no longer immune. Wherever you stretch your tentacles-we will find them. The IDF will continue to protect Israeli citizens.”

IDF Spokesperson Brig.Gen. Hidai Zilberman told reporters on Wednesday the tens of targets struck in Damascus, west of Damascus and the Syrian Golan Heights overnight belonging both to the regime of Bashar al-Assad and Quds Force were carried out within minutes.

While the launchers which fired the rockets on Tuesday morning were not struck, advanced air defense systems, reconnaissance sites and warehouses, headquarters and military bases were targeted.

“We will not let Iran entrench in Syria,” Zilberman said, adding that the IDF “is prepared to respond harshly to further attacks if necessary. We will not accept an Iranian force near our borders and will continue to work against it.

In a separate incident, a house in Qudsaya, a city some 7 km west of Damascus, was severely damaged in the reported strike

“During the attack, Syrian air missiles were fired, despite a clear warning that was ignored. As a result, several Syrian aerial defense batteries were destroyed,” the IDF said.

The attack was carried out in response to four rockets which the IDF said were launched by an Iranian force from Syrian territory towards northern Israeli territory in the early hours of Tuesday morning.

All rockets were intercepted by the Iron Dome missile defense system, causing no damage or injuries.

“The Iranian attack against Israeli territory yesterday is further proof of the current Iranian purpose in Syria. Their presence in the region is a danger to Israel’s security, regional stability and to the Syrian regime,” the military said.

Prime Minister Benjamin Netanyahu issued a statement following the attack, saying in it that “I made it clear that whoever harms us – we will harm them.”

“That is what we did tonight in Syria against Iranian Quds Force targets and Syrian military targets, after rockets were fired from its territory towards Israel. We will continue to aggressively guard the security of Israel.

“Syrian news agency Sana reported that Syrian regime air defense systems were able to intercept some of the 11 of the 18 missiles fired by a total of 6 jets before they were able to reach their targets.

According to SANA, regime defenses came under “a heavy attack” by Israeli fighter jets that targeted the Damascus area from the Israeli Golan Heights and Lebanese airspace near the town of Marjayoun.

Warning of a possible retaliation, the IDF closed their statement by saying that “the IDF is highly prepared for a variety of scenarios and will continue to operate as required for the security of the citizens of the State of Israel. The Home Front Command instructions should be obeyed if required.

“Zilberman said that no special instructions for the North have been given.

Israel has been carrying out a war-between-wars campaign since 2013 in an attempt to prevent Iran and its proxies like Hezbollah from obtaining advanced weapons to use against the Jewish state and from entrenching itself in Syria.

Thousands of strikes have been carried out over the years in Syria and according to foreign reports has seen strikes in neighboring Iraq.

IDF Chief of Staff Lt.-Gen. Aviv Kochavi and Prime Minister Benjamin Netanyahu have warned in recent weeks of the increased threat posed by the Islamic Republic which they say is getting bolder and more willing to respond to Israeli attacks on Iranian and Iranian-backed militias and infrastructure