A leading secular legal group says the Department of Housing and Urban Development has agreed to pay $17,800 after settling a lawsuit related to Secretary Dr. Ben Carson’s participation in a Bible study and his daily schedule that might include a Bible study.

Last Thursday, the Wisconsin-based Freedom From Religion Foundation announced that it, along with the Citizens for Responsibility and Ethics in Washington, settled a federal lawsuit filed after the denial of a Freedom of Information Act-related request by the agency.

FFRF and CREW filed a lawsuit in January 2018 accusing the agency of a pattern of rejecting requests to waive fees associated with processing their FOIA requests.

The requests filed by both groups were for the disclosure of records related to the influence Carson’s family members have at HUD, emails Carson or other HUD officials have exchanged with a ministry that leads a weekly Bible study for top political leaders, any internal correspondence regarding the weekly Bible study that Carson sponsors, and copies of Carson’s daily schedules schedule that include the daily Bible study.

The organizations claim that under FOIA law, agencies should produce requested documents at “no charge” to the requester if “the disclosure of the information is in the public interest because it is likely to contribute significantly to public understanding of the operations or activities of the government and is not primarily in the commercial interest of the requester.”

Both organizations requested that HUD waive fees associated with their FOIA requests but their requests were denied.

FFRF contends that the only explanation HUD gave for the denial of their request was: “You state that fees should be waived because of your nonprofit status and because the release of records is in the public interest. Your request for fee waiver is denied.”

According to FFRF, HUD has displayed a “pattern” of denying fee waivers on FOIA requests where disclosure of the documents is “likely to cast the agency or HUD secretary in a negative light.”

In the settlement, HUD agreed to offer two sessions of in-person mandatory fee waiver training for its FOIA office and will issue and updated fee waiver guidance.

“One of the major benefits is that the updated training and guidance will ensure that citizens and groups will have access to agency records,” FFRF Senior Counsel Patrick Elliott said in a statement. “It is FFRF’s information and understanding that HUD had been illegally rejecting requests to waive fees. The lawsuit has remedied that situation by forcing the agency to give FFRF and CREW the records without charge and making it promise to hold trainings to update staff.”

FFRF, which advocates for a strict separation of church and state, has been critical of the weekly Bible studies organized by Capitol Ministries since the beginning of the Trump administration in 2017.

FFRF has claimed that weekly Bible study is a “big waste of taxpayers” and has called for cabinet members to “study the Bible in your private capacity, not in your official capacity and at your government desk.”

The group renewed its call in March after Drollinger made headlines when one of his blog posts was misrepresented by the mainstream media in articles suggesting that Drollinger had linked the coronavirus outbreak to homosexuality.

Along with Carson, the Bible study is sponsored by Secretary of Housing and Urban Development Alex Azar, Secretary of State Mike Pompeo, Secretary of Education Betsy DeVos, other former and current cabinet members as well as Vice President Mike Pence.

“Having enough perspective to realize that people who disagree with you are not automatically your enemies and learning how to treat each other and the constituents of this nation with respect will go a long way toward healing our nation,” Carson said in a statement posted to the website. “The work of Capitol Ministries is interwoven into those goals.” 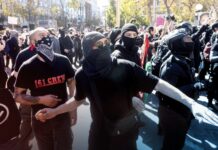