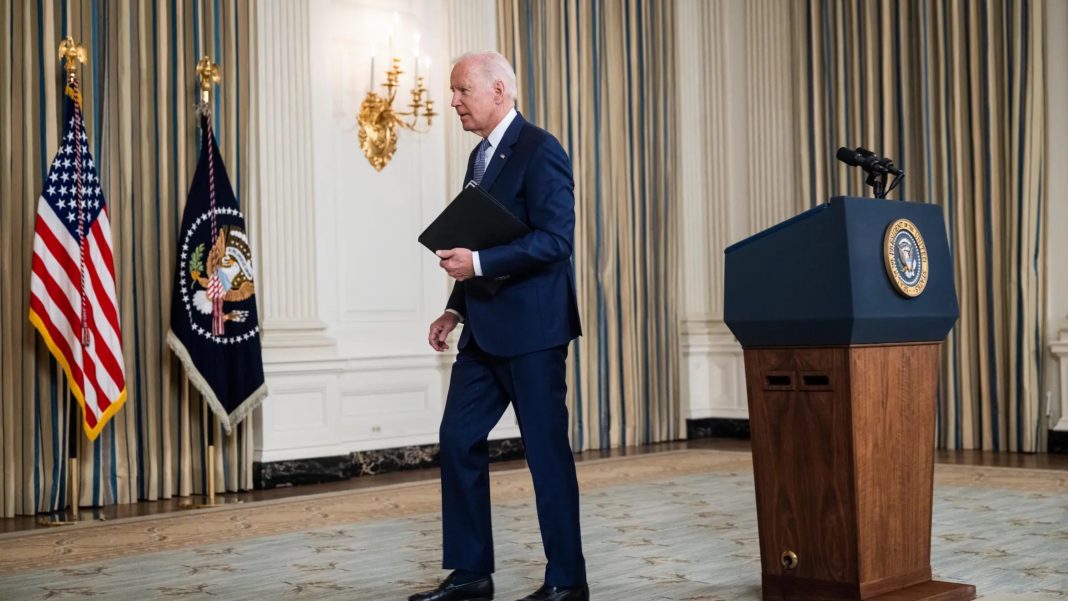 US President Joe Biden said on Tuesday he was certain China would try to work out an arrangement with the Taliban after the Islamic insurgents seized power in Afghanistan on August 15.

Asked if he was worried that China would fund the group, which is sanctioned under US law, Biden told reporters, “China has a real problem with the Taliban. So they’re going to try to work out some arrangement with the Taliban, I’m sure. As does Pakistan, as does Russia, as does Iran. They’re all trying to figure out what do they do now.”

The United States and its Group of Seven allies have agreed to coordinate their response to the Taliban, and Washington has blocked the Taliban’s access to Afghanistan’s reserves, most of which are held by the New York Federal Reserve, to ensure they live up to their pledges to respect women’s rights and international law.

But experts say much of that economic leverage will be lost if China, Russia, or other countries provide funds to the Taliban.

Italy, the current president of the Group of 20 major economies – which include China and Russia – has been trying to set up a virtual G20 meeting on Afghanistan, but no date has been announced, suggesting discord among the group.

Chinese State Councillor and Foreign Minister Wang Yi told US Secretary of State Antony Blinken in a phone call on Aug. 29 that the international community should engage with the Taliban and “positively guide” them.

China has not officially recognized the Taliban as Afghanistan’s new rulers, but Wang in July hosted Mullah Baradar, who has since been appointed as deputy prime minister and has said the world should guide and support the country as it transitions to a new government instead of putting more pressure on it.

In his recent MIDEAST REVIEW, Amir Tsarfati of Behold Israel emphasized how the Biden Administration’s weakness regarding the Taliban has emboldened the wicked.

“The conditions in Taliban-led Afghanistan are horrific, as expected,” Amir explained. “Watching their military parade as they show off all their new American-made equipment, it is easy to imagine just how violent life is away from the media and camera coverage… Reports are rampant of summary executions of anyone suspected of having been a collaborator with the Americans.”

“I want to emphasize again the global geopolitical ramifications of this show of U.S. weakness,” he asserted. “Russia has been emboldened in its aspirations toward its former Soviet satellites, particularly Ukraine. North Korea has restarted the Yongbyon nuclear reactor according to the International Atomic Energy Agency (IAEA). Iran understands America’s weakness and is pushing ahead with their uranium enrichment. Turkey is ready to recognize the Taliban as a legitimate government and is about to be given authority to jointly control Kabul airport with Qatar. China is anxiously waiting their opportunity to exploit the $1-3 trillion worth of minerals in Afghanistan. They also are becoming more emboldened at home issuing a demand that any vessel entering their waters or the disputed waters around Taiwan and Japan must report in advance to the PRC. Essentially, they have declared those seas their own.”

And indeed China has been emboldened in recent months. The Communist-run country has increased its brazenness exponentially. This is due to what many are dubbing a “post-America world-order” under the weak leadership of the Biden Administration.

In August, China warned Taiwan that the United States would not come to their rescue “once a war breaks out” in the Straits.

Amir Tsarfati went onto explain that what may look like “global insanity actually fits exactly into what was prophesied 2500 years ago” in the Bible.

“As we look at this world, it seems that much of it is falling apart. However, sometimes the bad times are not as bad as we think they are. We simply need a biblical perspective,” Tsarfati wrote. “That is the viewpoint that I provide in my teaching, The Days of Ezekiel. What looks like global insanity actually fits exactly into what was prophesied 2500 years ago. The miraculous restorations of the land and the people of Israel tell us that the time of the Lord’s return is likely short. It also reminds us that in the midst of what appears to be a world run amuck, God is working out His plan.”

“The ride is getting bumpy for the church, but that’s okay,” Amir continued. “It’s the bumps that grow our faith in God and deepen our love for one another. Let not your hearts be troubled. You believe in God, dear church; believe also in your Groom. Never forget that He has His eye on you, will always watch over you, and will soon come to take you to your wedding day.”