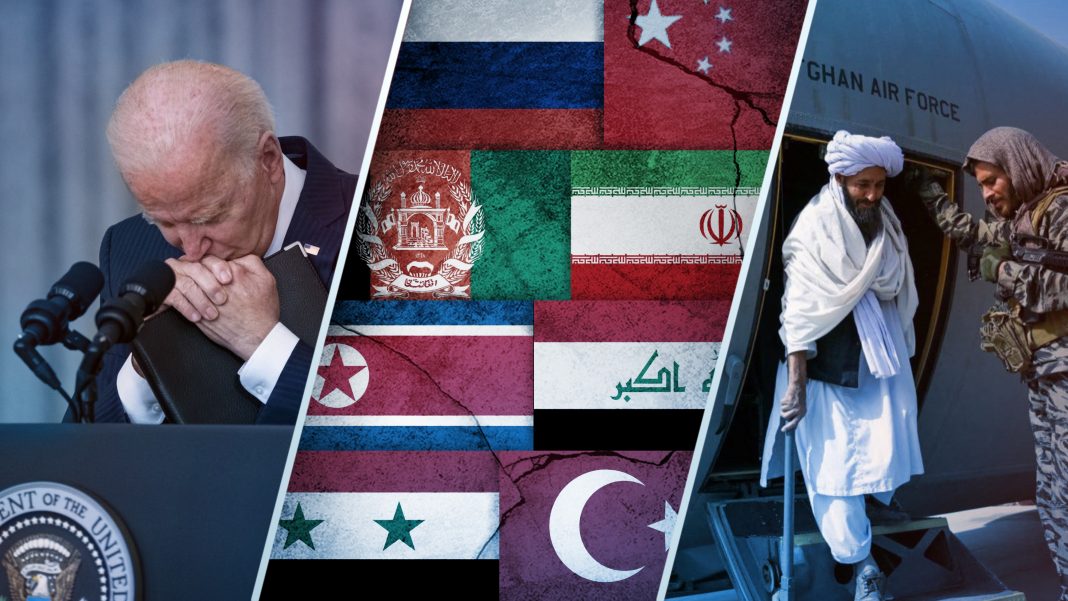 The U.S. withdrawal from Afghanistan which culminated on Tuesday has been a failure of historic proportions. The Biden administration continues with its Pollyanna perspective of the process. When confronted with the hundreds of American civilians left behind, their pathetic answer was essentially, “Well, sure, but look at all the ones we didn’t leave behind.” Also, while it is disputed just how much military equipment was abandoned and how much of that is functional, there is still no doubt that America has armed and upgraded the Taliban’s firepower exponentially.

The conditions in Taliban-led Afghanistan are horrific, as expected. Watching their military parade as they show off all their new American-made equipment, it is easy to imagine just how violent life is away from the media and camera coverage. Just yesterday, 45 military soldiers were killed by the Taliban in Badakhshan province, and their bodies were simply thrown into the Kukcha River. Reports are rampant of summary executions of anyone suspected of having been a collaborator with the Americans. As a result, there is a mass exodus of thousands upon thousands of people from through the wilderness of Afghanistan toward Iran. From there, they hope to make their way into Europe. As I mentioned last week, for detailed updates as they happen, please subscribe to my Telegram channel.

I want to emphasize again the global geopolitical ramifications of this show of U.S. weakness. Russia has been emboldened in its aspirations toward its former Soviet satellites, particularly Ukraine. North Korea has restarted the Yongbyon nuclear reactor according to the International Atomic Energy Agency (IAEA). “The bottom line is North Korea wants to improve the number and quality of its nuclear weapons,” said David Albright, president of the Institute for Science and International Security. Iran understands America’s weakness and is pushing ahead with their uranium enrichment. Turkey is ready to recognize the Taliban as a legitimate government and is about to be given authority to jointly control Kabul airport with Qatar. China is anxiously waiting their opportunity to exploit the $1-3 trillion worth of minerals in Afghanistan. They also are becoming more emboldened at home issuing a demand that any vessel entering their waters or the disputed waters around Taiwan and Japan must report in advance to the PRC. Essentially, they have declared those seas their own.

Iran continues to spread havoc around the Middle East. On Tuesday, Iranian-backed Houthi rebels are suspected of striking a Yemeni airbase in the southwest region of the country. The missile and drone attack left more than 30 dead and 50 injured.

An Iranian oil tanker is on its way to Lebanon in violation of international sanctions. The terrorist group Hezbollah has said that it is awaiting its arrival. It will be interesting to see if either the U.S. or Israel will defy Iranian threats of retaliation against any country looking to intercept the ship. In other oil news, a massive spill from a powerplant in Jableh, just north of Baniyas, Syria, has poured 15,000 tons of fuel into the Mediterranean which is spreading along the coast and is reaching westward toward Cyprus.

Fighting continues in the Syrian war. The national military combined with Iranian forces to attempt to advance to Daraa, but without success. Meanwhile, Russian planes continue to pound targets in the country. Some positive news – Muhammad Noruzi, an Iranian al-Quds official and the commander of the chemical weapons division in Assad’s army was killed. There are no further details. Because of Afghanistan, the world has forgotten about Syria. But the nations, Israel in particular, must never take their eyes off of Damascus.

Also in Syria, a new shipment of Iranian Barkan H2 surface to surface advanced missiles has arrived in country. The weapons, which were hidden in vegetable trucks, were transferred to the city of Al-Miyadin in Dier a-Zor district. From that location, these medium range missiles can easily hit targets in Israel.

Iraq, too, has been shopping at the weapons mall and has found a deal in Turkey’s store. After browsing the aisles, they walked out loaded with bags filled with Bayraktar TB2 UAVS, twelve T129 assault helicopters, and six KORAL electronic warfare kits. Apparently, for the Iraqis, the US big box store is following Circuit City into irrelevance. To emphasize the country’s independence, Hadi al-Amiri, an Iraqi parliamentarian and the head and Secretary General of the Shiite Badr Organization stated that by December 31, all foreign forces will withdraw from Iraq. None will be left on Iraqi soil. The only force that will operate in Iraq is the Iraqi army. I wonder if this includes the Iranian-supported Shiite militias – the ones like al-Amiri’s own Badr Brigade.

It is business as usual in southern Israel. Hamas and its minions continue to send incendiary balloons over the border from Gaza and the IDF continues to launch strikes on their weapons storage and military training facilities.

After being delayed by a day due to events in Afghanistan, Israeli Prime Minister Naftali Bennett met with President Joe Biden on Friday. It was a historic moment that was memorable for its lack of memorable moments. They met, they talked for a while, they talked to the press about what they talked about, then they parted ways. In other US/Israel political news, Israel shared its strike plans against Iran with the Pentagon. Although they kept some details secret, they did inform the administration that Tehran is aiming for five bombs in the first phase of their nuclear project – a fact Israel discovered in intel that they stole from Iran.

Last week I mentioned the US testing Israel’s Tamir Iron Dome missile defense system. It seems that the American military has opted instead for a sidewinder-based system from Dynetics called Enduring Shield. More expensive, less successful, and with no operational experience, the Dynetics option is the perfect choice for the U.S.’s politicized military.

In one more development in the shaky relationship between the new U.S. administration and the new Israeli administration, the Biden administration said that it plans to reopen its consulate in Jerusalem. This is significant, because that consulate has always been a base for diplomatic outreach to Palestinians. “We think it’s a bad idea,” Foreign Minister Yair Lapid said very bluntly. The move, which some think could destabilize Prime Minister Bennett’s government, is a major step backwards from the advancement in relationship under the previous U.S. administration. This is where so many pastors got it wrong, claiming that the previous president was seeking to divide Jerusalem. It is the new president who is dividing the city, and this ill-conceived move could lead to serious consequences.

Finally, in good news, Bahrain’s first ambassador to Israel arrived on Tuesday. Israel’s foreign Ministry Spokesman Lior Haiat praised the arrival of Khaled Yousif al-Jalahmah, saying, “The ambassador’s arrival, and the upcoming official opening of the Bahraini Embassy in Israel, mark an important step in developing bilateral relations between the two countries and their peoples.”

As we look at this world, it seems that much of it is falling apart. However, sometimes the bad times are not as bad as we think they are. We simply need a biblical perspective. That is the viewpoint that I provide in my teaching, The Days of Ezekiel. What looks like global insanity actually fits exactly into what was prophesied 2500 years ago. The miraculous restorations of the land and the people of Israel tell us that the time of the Lord’s return is likely short. It also reminds us that in the midst of what appears to be a world run amuck, God is working out His plan.

At the end of John 13, Jesus tells His disciples that He is going away and lets them know that where He is going they cannot come. This was troubling to the disciples, who had spent the last several years following around their Teacher. Sensing their fear, Jesus said to them, “Let not your heart be troubled; you believe in God, believe also in Me.” (John 14:1)

Can there be any better words for us as we look at the world around us? Empires rising and empires falling. Pandemics and passports, masks and mandates, protests and pronouns. It’s hard not to get the sense that the bad guys are winning! We need to remember, though, that the bad guys never win. Even when it looks like a new hash mark is scribbled in their “W” column, it only takes a few steps backward to be able to see that they aren’t even playing the right game. It’s like somebody sinking a beautiful 3-point basket during a baseball game. It may look pretty, but it is utterly meaningless.

The ride is getting bumpy for the church, but that’s okay. It’s the bumps that grow our faith in God and deepen our love for one another. Let not your hearts be troubled. You believe in God, dear church; believe also in your Groom. Never forget that He has His eye on you, will always watch over you, and will soon come to take you to your wedding day.

1 Corinthians 15:51-52 KJV – “Behold, I shew you a mystery; We shall not all sleep, but we shall all be changed, 52 In a moment, in the twinkling of an eye, at the last trump: for the trumpet shall sound, and the dead shall be raised incorruptible, and we shall be changed.