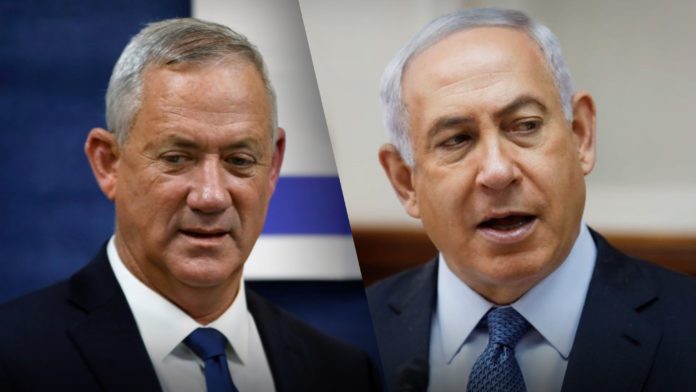 Prime Minister Benjamin Netanyahu and Blue and White leader Benny Gantz inched closer to a deal on Monday, just hours before a deadline to form a government was due to elapse.

The two were expected to meet late Monday at the Prime Minister’s Residence in order to come up with a final framework for a unity government, with both sides reporting progress in talks.

Gantz, who shocked many on the Left when he agreed to hold talks with Netanyahu several weeks ago in an effort to form a unity government with a rotating premiership, attacked Netanyahu on Monday during a televised speech, accusing Netanyahu of negotiating in bad faith.

“We came up with key points of agreement, and I hope Netanyahu stays true to his word, and that he won’t capitulate to people within his own camp,” Gantz said, referring to the outstanding issues that have prevented the finalization of the deal and the swearing-in of the unity government.

“Several days ago Netanyahu and I reached a fair deal, under which Likud compromised on some of its demands and so did we,” Gantz said, adding that his decision to break ranks with the Left and join a Netanyahu government was designed to “put the country first” in order to help navigate the country through the coronavirus crisis.

“Getting this done is imperative,” Gantz said. “This is our moment of truth, history will not forgive us if we have cold feet. We either form an emergency government, or God forbid, hold a fourth early election,” he continued.

Minutes after Gantz’s speech, Netanyahu tweeted: “Gantz, I am waiting for you at the Prime Minister’s Residence. Let’s sign a deal tonight.”

The urgency to sign a deal is a result of President Reuven Rivlin’s decision not to extend the 28-day period Gantz got to form a government.

Rivlin said that because a unity government was not ready to be finalized, there was no point in extending. This means that come Tuesday at midnight, the mandate moves to the Knesset, which will have 21 days to appoint a prime minister with a majority of MKs. If that doesn’t happen, new elections will automatically be triggered.