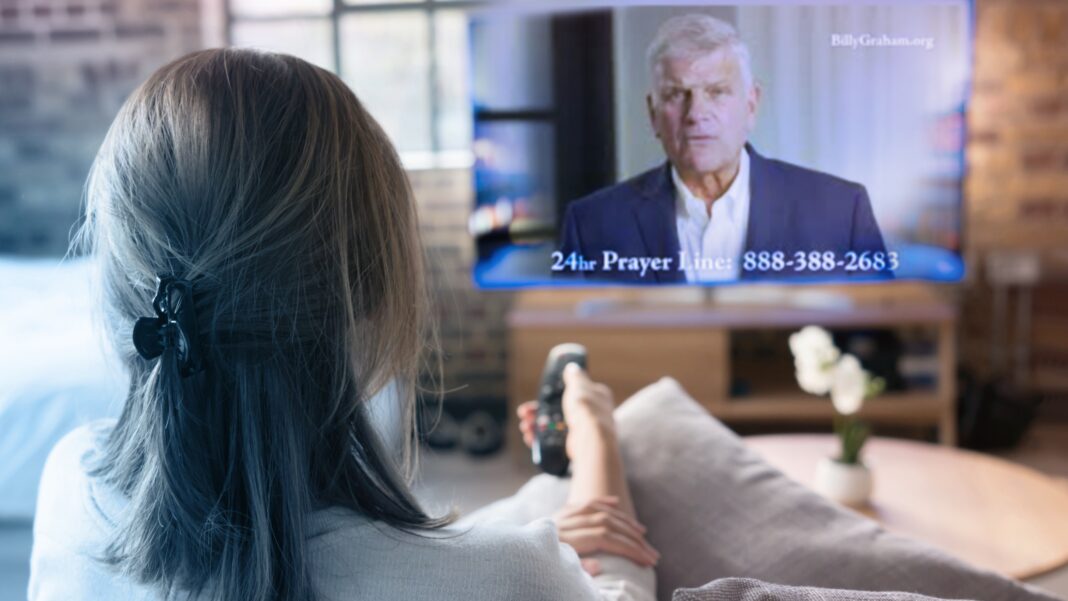 Since its start during the first months of the pandemic, the Billy Graham Prayer Line has received 690,000 calls.

Many of them were dials for help.

For more than a year, people feeling despair, struggling with questions about God or seeking salvation have been able to access answers. Answers to questions that have been especially stimulated by the effects of COVID-19.

Many of the callers are watching mainstream media when Franklin Graham’s Gospel ads appear on TV, offering Good News and information about the prayer line.

And people want in.

Read three short stories that show how a phone call can fill people’s lives with hope.

A Passion for the Gospel

Pamela* saw Franklin Graham’s Gospel ad on television and prayed with him to give her life to Jesus Christ.

When she called our number, she enthusiastically shared about her salvation and asked if we could send materials to help her grow in her new faith. She was burdened for her family members who don’t know the Lord and asked for assistance in knowing how to share Jesus with them.

Pamela said she needed to tell her family, “Our problem is a sin problem.”

After praying with a Billy Graham Evangelistic Association (BGEA) staff member, she rejoiced and thanked the Lord for dying on the cross on her behalf.

A Three-Way Call for Help

Mona, a BGEA representative, received a three-way call from a nursing home.

Ellie* and Holly* were on the line. They had both seen Franklin Graham’s Gospel spot, and each indicated they wanted to pray to receive Jesus Christ into their lives.

Mona talked with them about the Gospel, and both women prayed to repent of their sins and accept what Christ did on their behalf. Both were overcome with emotion, filled with joy for what God has done for them.

Holly recently experienced a stroke and is recovering, and together they prayed for her recovery. Mona encouraged them to read their Bibles daily and challenged them to expect the Lord to continue working in their lives.

‘I Need to Be Forgiven and Set Free’

Stella* called the prayer line in a state of brokenness, grieving and struggling with guilt over her past.

She said, “I need to be forgiven and set free.”

Stella and Lauren, a BGEA staff member, talked for a long time, discussing the Gospel, what Christ did for us on the cross, and how He can provide redemption and the forgiveness of sins.

After bearing her heavy burden for years, Stella indicated she was finally ready to repent and surrender her life to Jesus Christ, and she prayed to be saved. Lauren shared about what it means to be a new Christian, walking with the Lord, and how to honor God with her life.

Stella expressed excitement about her new life in Jesus and said she looks forward to serving the Lord.

Graham explained that when our world goes through turmoil people’s hearts seem more softened and willing to listen to the Gospel. “When the world turns upside down is when they’re eager to listen,” he explained.

“The people’s hearts have been softened a little bit. People who have not listened before are listening now,” he described. “I think they’re willing to listen to the Gospel. People are scared and afraid. When you give them the hope we have in Jesus Christ, they’re eager to accept that.”

Franklin Graham in an article earlier this year wrote:

When my father was preaching in London in 1954, he was invited to 10 Downing Street to meet with Prime Minister Winston Churchill. In those days, communism overshadowed the whole world, and Mr. Churchill said that he had no hope for the future of our world. Outside of God, that is right—there is no hope. Then Churchill asked my father if he had any real hope, which opened the door for my father to pray with him and share the Gospel—including our everlasting hope in the return of Christ.

America faces a dark period of history if God turns His back on our nation because of our sins, including our leaders embracing and flaunting evil. Sad to say, even some churches are embracing what God has defined as sin.

None of this should take us by surprise.

We have tried to remove God from schools. It’s a constitutional “right” to kill babies in the womb—by the tens of millions. Marriage, according to the Supreme Court, is no longer just between one man and one woman. All 50 states must now officially recognize and perform same-sex marriages.

The Bible says this in the Gospel of John: “And this is the condemnation, that the light has come into the world, and men loved darkness rather than light, because their deeds were evil” (John 3:19).

A society that refuses to acknowledge God is in deep trouble. A nation that calls “evil good, and good evil” (Isaiah 5:20) and openly and unashamedly rebels against His ways is in even deeper trouble.

This is why our only hope is truly in God, and in His Son, the Lord Jesus Christ.

Jesus came to dispel the darkness. Speaking of the Savior 700 years before His birth, the Prophet Isaiah described His earthly ministry in Galilee where, “The people who walked in darkness have seen a great light; those who dwelt in the land of the shadow of death, upon them a light has shined” (Isaiah 9:2).

And the Apostle John declared in the prologue to his Gospel announcing Jesus’ coming into the world: “In Him was life, and the life was the light of men. And the light shines in the darkness, and the darkness did not comprehend it” (John 1:4-5).

It’s the Light of the Gospel, the Light of Christ, that shines into men’s hearts when they are born again, and it transforms them for all eternity. And it’s that Light that truly is the hope for our nation and for the whole world.

Jesus is the Light of the world, and there is no darkness that can dispel or extinguish the Light.