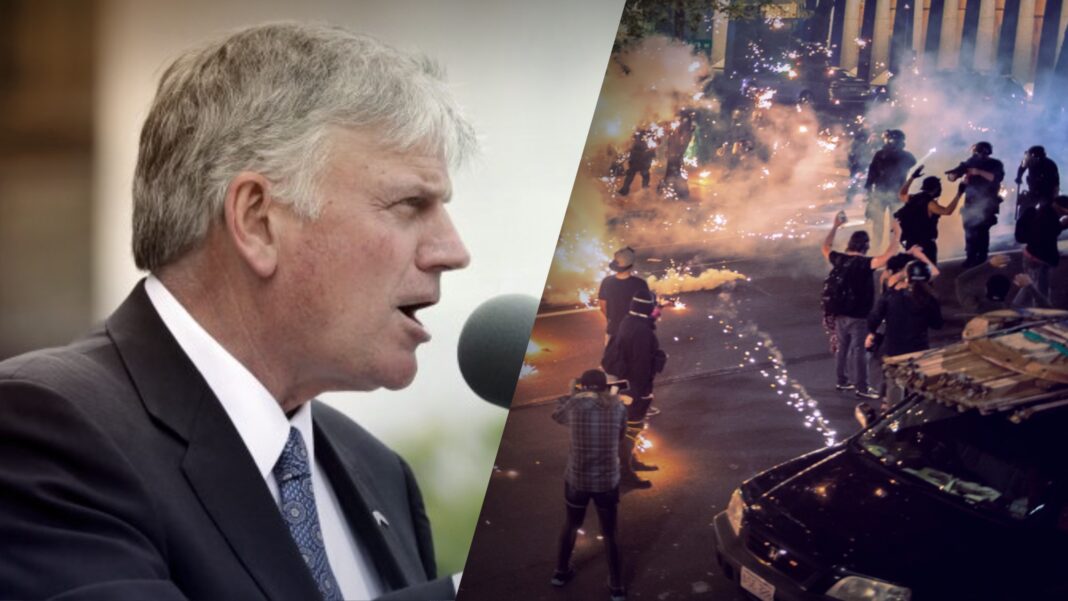 Franklin Graham took to Facebook Monday, as lawlessness continues throughout the United States fueled by Marxist BLM activists. In Rev. Graham’s post, he warned Americans to vote out the dangerous politicians flirting with socialism, saying, Portland should serve as an example:

In looking at the chaos that has erupted in cities controlled by liberal, socialist-leaning leadership, it should not only grieve us, but it should cause great concern. If this kind of leadership wins in local, state, and national elections in November, you can expect to see more and more of this, which would eventually lead to the demise of this nation as we know it.

Socialism is dangerous, and we have a party and many politicians who are flirting with all-out socialism. Portland is an example of what will take place in other cities if Americans do not take a stand in defense of the nation—through the power of the vote.

I would encourage every person who loves this country to pray and to turn out by the millions to vote. Don’t just watch the news and be depressed or shake your head about what’s going on—stand up for America! Vote for leaders who love this country, defend the Constitution, and who support law and order. Most importantly, pray and ask for God’s mercy and help for our nation.

Many agreed with Graham’s warning against rising Socialism and the responsibility for Christians at the ballot box, with some saying America’s vote could mean life or death for the United States.

“This is the most important election ever to defend our nations values and we need more than ever before a clear path to understanding our place in history against socialistic ideas and principles. Prayer in the elections toward a continued stance against the far left warmongers who want to divide and ruin our country,” one woman wrote.

“It scares me to death to think our beautiful country could go down this deplorable path.” a commenter expressed. “My father fought in WWII against the very thing we are openly inviting into our country. It breaks my heart and there’s so much riding on our great president’s re-election.”

“We can put any kind of label on it but at the end of the day it’s good versus evil it’s no longer about politics. United States of America is going to move towards the light or plunged into darkness may God have mercy on us,” concluded another.