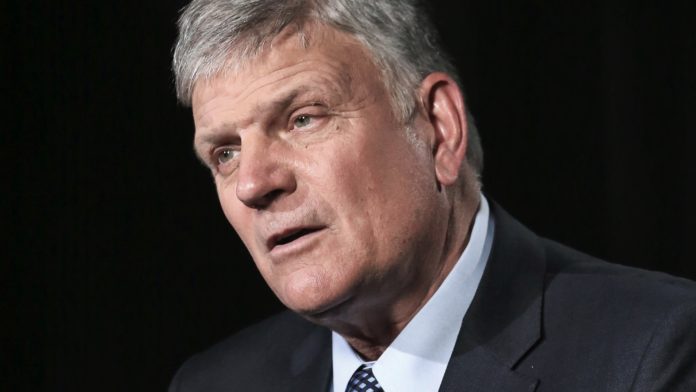 The late Billy Graham, founder of the Billy Graham Evangelistic Association, gospel preacher to hundreds of millions and spiritual adviser to both Democratic and Republican presidents, largely was regarded as apolitical during more than a half-century of ministry.

But back then Christian bakers and florists weren’t prosecuted for refusing to promote homosexuality, political differences weren’t grounds for impeaching a president and society generally recognized Second Amendment rights.

Now, his successor, son Franklin Graham, is calling on the nation to pray for Democrats in Washington to have a change of heart.

“The socialist Democrats’ message to the United States of America is: 1. We’re going to take your guns, and 2. We’re going to impeach your president,” he wrote Tuesday in a Facebook post.

He cited Robert Jeffress, pastor of First Baptist Church in Dallas, warning on Fox News that the current impeachment drive could “cause a civil war-like fracture in this nation from which this country will never heal.”

“I don’t know about that,” Graham wrote, “but I can tell you this could lead to conflict that nobody wants if they continue down this road.

“Pray that God would change the hearts of Democratic leaders in Washington and that they would see the dangerous road that we’re on.”

Jeffress said Trump committed an “unpardonable sin” in the eyes of Democrats by defeating Hillary Clinton in 2016.

“And I do want to make this prediction this morning: If the Democrats are successful in removing the president from office, I’m afraid it will cause a civil war-like fracture in this nation from which this country will never heal,” Jeffress said.

Media outlets skewed the pastor’s remarks, with one story calling him a “reliable Donald Trump toady.” Other reports led with someone slamming Jeffress for his comments.

While Graham’s comments drew many “amens” on social media, others…

“I pray for you, that you would stop juxtaposing your gospel message with one-sided politics,” wrote one.

Evangelical Christians largely supported President Trump in 2016 because of his promises to appoint judges who support the Constitution, restrict abortion and protect religious rights, all of which he has done amid fierce opposition.

Franklin Graham has urged Congress not to codify the LGBT agenda, warning of “catastrophic consequences.” He has said House Speaker Nancy Pelosi is responsible for any “constitutional crisis” based on unsupported claims that Trump colluded with Russia in 2016. And he told “gay Christian” presidential candidate Pete Buttigieg that it’s up to God, not people, to define sin.

“Using new terms like ‘Progressive Christianity’ and the “Christian Left’ may sound appealing to some, but God’s laws and standards do not change,” he said.