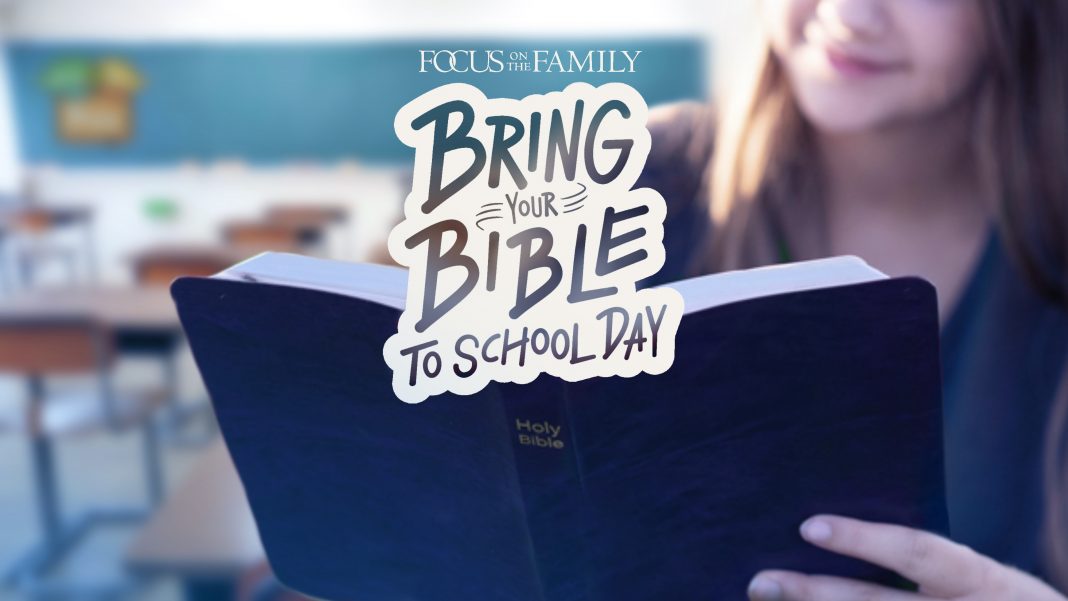 Hundreds of thousands of Christian students nationwide were encouraged to bring their Bibles to school on Thursday as part of a Christian advocacy organization’s annual Bring Your Bible to School Day.

Focus on the Family spearheaded its eighth annual Bring Your Bible to School Day as students were emboldened to share the word of God with their classmates.

The purpose of the occasion is to have students “read and treasure Scripture as God’s Holy Word, to encourage others with the hope we have in Christ Jesus, and to celebrate our religious freedoms in the United States.”

“This annual campaign empowers Christian students of all ages to speak God’s grace and truth into the culture around them, starting with two simple steps — bringing their Bibles to school and sharing what God’s word means to them,” Focus on the Family Program Manager Bret Eckelberry said in a statement.

“It opens doors for students to talk to their friends about the gospel. It connects them with other believers in their school. And it allows them to celebrate their religious freedoms in the United States.”

Focus on the Family’s Vice President of Parenting and Youth Danny Huerta told The Christian Post that it was too early to say whether participation in this year’s event surpassed the more than 514,000 students who participated last year.

“Our eventual goal is to get 1 million kids bringing their Bible to school or more,” he added. “It’s basically just a starting point … for kids to maybe start Bible studies in their school, [or] pray together in their school.”

In the past, students attempting to participate in Bring Your Bible to School Day have faced headwinds from school staff despite their established right to do so.

Huerta told CP that the religious liberty law firm Alliance Defending Freedom “has been a resource that we have pointed parents to … and/or students that have faced that adversity.”

On the official Instagram account for “Bring Your Bible To School Day,” the group encourages students to be firm in their faith:

“Bring Your Bible to School Day empowers Christian students of all ages to speak God’s grace and truth into the culture around them, starting with two simple steps — bringing their Bibles to school and sharing what God’s Word means to them,” they explain. “Joshua 1:9 tells us to ‘be strong and courageous.’ God wants us to be firm in our faith and to share His gospel, and Bring Your Bible to School Day is a great way to do just that.”

It is vital for Christians of all ages to share Biblical truth with those around them. This is especially important as schools become increasing secular and hostile to God’s Word.

Ken Ham discussing “Bring Your Bible To School Day,” urged students to know their rights under the US Constitution.

“Did you know that here in America you have the legal right to bring your Bible with you to your public school? The First Amendment to the US Constitution protects both private speech and the free exercise of religion!” Ham explained. “Many young people don’t know their rights.”

“Because of secularists who bully Christians and try to remove all mentions of Christianity from government schools and other public places, many Christians think it’s illegal for them to take God’s Word with them to a public school. But it’s not at all,” he continued. “Bring Your Bible to School Day is a good reminder that the freedoms we enjoy here in America need to be protected for the next generation. In fact, Christian students have more freedom under the protection of the First Amendment than they realize. Sadly, secularists have intimidated people into thinking that Christians don’t have the right to private speech, all the while attempting to impose their religion of the secularist worldview on the culture.”

“Bring Your Bible to School Day is also a great opportunity to strike up conversations about God’s Word with your friends, classmates, and even teachers. Let them see you reading God’s Word and explain to them the difference it has made in your life while pointing them toward the gospel of Jesus Christ,” he encouraged.

“I urge Christians to stand up for their rights and not let secularists intimidate them or impose their secularist religion on the culture,” Ham added.

Matthew‬ ‭5:14-16‬ ‭KJV‬‬ – “Ye are the light of the world. A city that is set on an hill cannot be hid. Neither do men light a candle, and put it under a bushel, but on a candlestick; and it giveth light unto all that are in the house. Let your light so shine before men, that they may see your good works, and glorify your Father which is in heaven.”

1 Peter‬ ‭3:15-16‬ ‭KJV‬‬ – “but sanctify the Lord God in your hearts: and be ready always to give an answer to every man that asketh you a reason of the hope that is in you with meekness and fear: having a good conscience; that, whereas they speak evil of you, as of evildoers, they may be ashamed that falsely accuse your good conversation in Christ.”