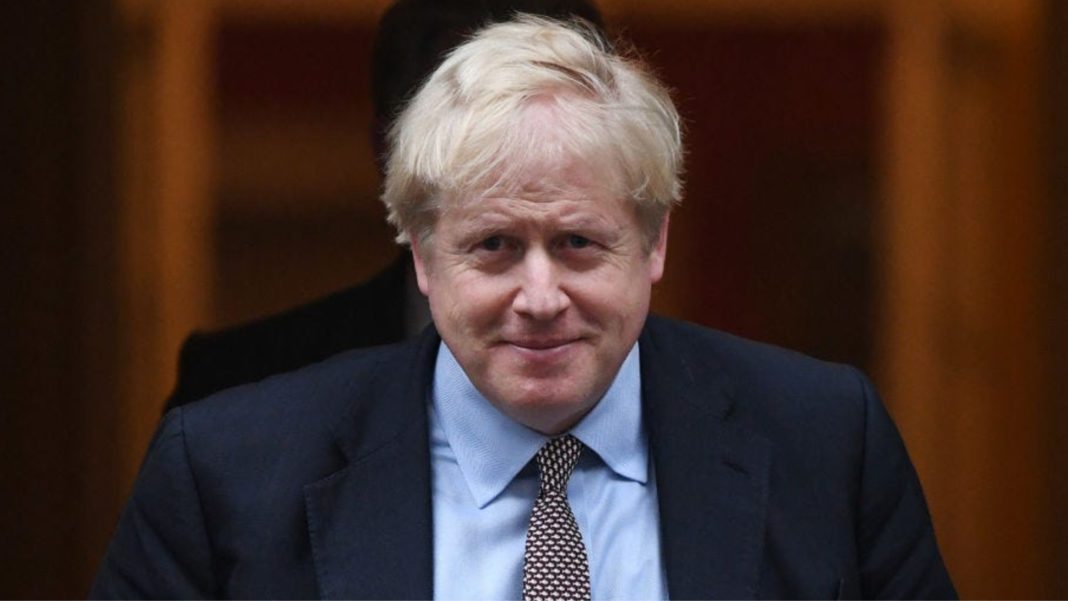 Boris Johnson hailed the political ‘earthquake’ that has given him a ‘mandate to get Brexit done’ today as he marched his new blue-collar Tory army towards a staggering election landslide.

After laying waste to Labour’s ‘red wall’ of Leave-backing strongholds, the PM said he had been given a ‘powerful’ vote of confidence by the British people and vowed to ‘rise to the challenge’.

The promise came with experts forecasting the Conservatives are on track to rack up 365 seats in the first December election for nearly a century, with Labour collapsing to 203 – down 59 on 2017. The Tories formally crossed the winning line of 325 seats just after 5am.

Jeremy Corbyn announced this morning that he will quit as leader in the wake of the humiliation, petulantly swiping at ‘disgusting’ media attacks on him, saying he still believed his hard-Left platform was ‘popular’, and blaming Brexit for preventing ‘normal political debate’. However, he made clear he would stay on for a period of ‘reflection’ while a replacement was selected.

The bombshell numbers would give Mr Johnson a huge Commons majority of 80, the biggest since Margaret Thatcher’s third victory in 1987, and more than enough to fulfill his vow to ‘get Brexit done’.

The Tories’ estimated vote share of 45 per cent in Britain is the highest achieved since Edward Heath in 1970.

In England the Conservatives polled 47.1 per cent to Labour’s 34.3 per cent, and in Wales they were supported by an impressive 36.1 per cent.

By contrast Mr Corbyn looks to have stewarded his party to its worst performance since 1935 and plunged it into a seething civil war – despite his allies vainly claiming earlier that high turnout might have helped him pull off a surprise.

In another moment of high drama, Lib Dem leader Jo Swinson suffered the ultimate humiliation of losing her own East Dunbartonshire seat. And ironically the party’s Brexit spokesman Tom Brake lost his Carshalton base to the Tories.

As a delighted Donald Trump tweeted that it was ‘looking like a big win’ and teed up a ‘massive new trade deal’ with the US, Mr Johnson told rapturous supporters, including girlfriend Carrie and their dog Dilyn, that he had not wanted to call the December election but the outcome was ‘historic’.

Speaking at his count in Uxbridge and South Ruislip, Mr Johnson said: ‘Clearly lots of results are still coming in and we’re still mainly dealing with projections but at this stage it does look as though this One Nation Conservative government has been given a powerful new mandate to get Brexit done.

‘And not just to get Brexit done, but to untie this country and to take it forward and to focus on the priorities of the British people, and above all, on the NHS.’

In an address to staff at CCHQ afterwards, Mr Johnson said: ‘We must understand now what an earthquake we have created.

‘The way in which we have changed the political map in this country.

The Conservatives pulled off a massive coup by securing the symbolic swing constituency of Workington, overturning a 3,000 majority to triumph by 4,000 votes with a 10 per cent swing.

They also overturned an 8,000 majority to rip the former mining area of Blythe Valley in Northumberland from Labour’s grip for the first time ever. The party’s candidate won by 700 votes after securing an incredible 10.2 per cent swing in what was theoretically only 85th on the target list.

There were jaw-dropping gains in Bishop Auckland – which had never elected a Conservative MP in 134 years – and Tony Blair’s old stronghold of Sedgefield.

Left-wing ‘Beast of Bolsover’ Dennis Skinner was ejected from the seat he has held since 1970, as Mr Johnson flipped huge swathes of the country from deep red to Tory blue.

Other fortresses to fall included Leigh, Darlington, Wakefield, Stockton South, Redcar – which saw a 15.5 per cent swing – Peterborough, Wrexham and the Vale of Clywd.

As the political map was redrawn in a few tumultuous hours, places like Jarrow, Houghton & Sunderland South, Sunderland Central, and Newcastle Upon-Tyne Central saw enormous movements from Labour to the Conservatives – although the party clung on.

A pattern was emerging of Brexit Party candidates draining votes from Labour in its northern heartlands, while Tory support held steady.

In a few crumbs of comfort for Remainers, Cabinet minister Zac Goldsmith lost to the Lib Dems in the heavily Remain seat of Richmond Park.

Putney was taken from the Conservatives by Labour thanks to tactical voting by Lib Dem supporters. And Labour’s Rosie Duffield kept hold of Canterbury – one of its marquee captures from the 2017 poll.

However, a cross-party bid to eject Foreign Secretary Dominic Raab in Esher & Walton and Tory ex-leader Iain Duncan Smith in Chingford and Wood Green failed. And Kensington was painted blue again, having briefly been held by Labour’s Emma Dent Coad.

There were scenes of jubilation in CCHQ as the exit poll was unveiled at 10pm, with staff singing and dancing following a month of brutal political struggle as Mr Corbyn tried desperately to sell his hard-Left agenda to the UK public.