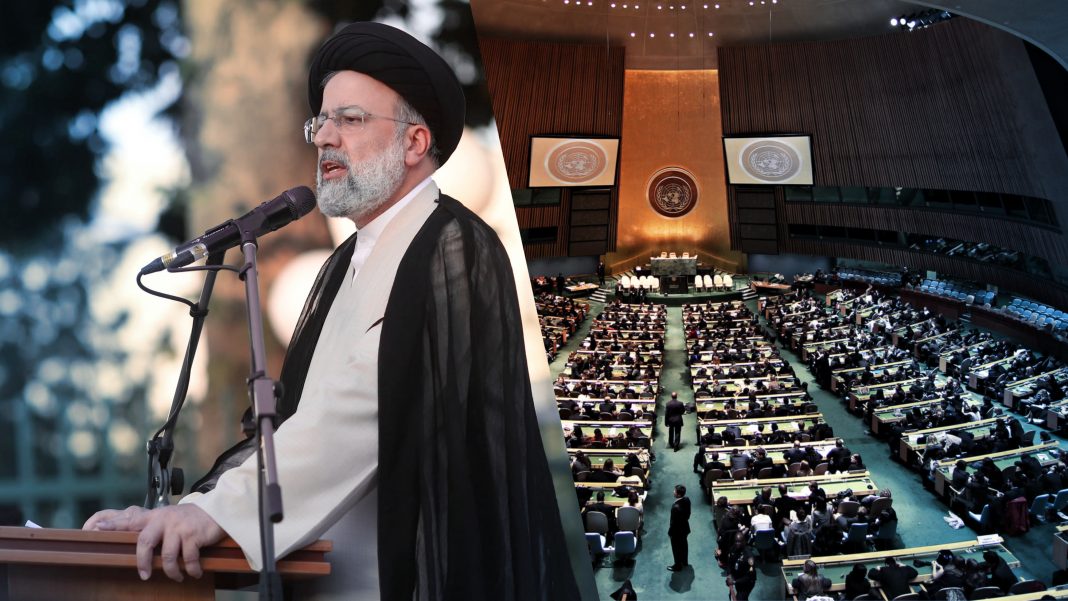 Pressure is ramping as world powers attempt to stop the Islamic Republic of Iran from crossing the threshold of becoming a nuclear power.

A nuclear weapon-wielding Iran poses a chief threat to the nation of Israel, a country Iranian regimes have not shied away from declaring their intention of wiping off the map.

The topic of Iran nearing its goal to develop such weapons was widely discussed at the United Nations general assembly.

Israel’s Former Ambassador to the United Nations, Danny Danon, stated that although it is important for world leaders to discuss the Coronavirus at the UN, there is “at least as significant, if not more of a menace that could undermine the delicate stability in the Middle East and globally, and that is the Iranian nuclear threat.”

Dannon further urged that the JCPOA is not the solution to “terminate an already advanced nuclear program.”

“The nuclear agreement to which Iran and the original agreement signatories, or the P5+1, may return will not terminate an already advanced nuclear program. It will only serve to bestow international legitimacy to an unrestrained extremist Iranian regime and its treacherous nuclear ambitions,” the former ambassador warned.

“Throughout my diplomatic career I have learned that many countries talk about the importance of Israel’s security while making decisions that actually weaken our security,” Dannon wrote in an opinion piece published to the Jerusalem Post. “Israel must take our enemies’ threats more seriously than our allies’ promises. If this dangerous regime attains the nuclear capabilities to which it aspires it will undoubtedly disturb the delicate balance that exists in the region, and it will be not only Israel and the Middle East region that will suffer. In diplomacy, politeness is maintained but positions should not be surrendered. The State of Israel must reveal the truth clearly and unambiguously that it is impossible to sign an already fractured agreement and simultaneously talk about halting the Iranian nuclear program.”

Danon stressed that the Israel’s Prime Minister “must be bold and clear” when addressing the General Assembly.

In his speech, Bennett stated that “Iran’s nuclear program has hit a watershed moment.”

“Over the past few years, Iran has made a major leap forward, in its nuclear R&D, in its production-capacity, and in its enrichment,” he saidh. “Iran’s nuclear weapon program is at a critical point. All red lines have been crossed. Inspections — ignored. All wishful-thinking — proven false. Iran is violating the IAEAs safeguard agreements — and it’s getting away with it. They harass inspectors and sabotage their investigations — and they’re getting away with it. They enrich Uranium to the level of 60 percent, which is one step short of weapons-grade material — and they’re getting away with it. Evidence which clearly proves Iran’s intentions for nuclear weapons in secret sites in Turquzabad, Teheran & Marivan — is ignored.”

“Iran’s nuclear program has hit a watershed moment,” Bennet further warned. “And so has our tolerance. Words do not stop centrifuges from spinning. There are those in the world who seem to view Iran’s pursuit of nuclear weapons as an inevitable reality, or they’ve just become tired of hearing about it. Israel doesn’t have that privilege. We will not tire. We will not allow Iran to acquire a nuclear weapon.”

Despite his insistence that Israel will “not allow Iran to acquire a nuclear weapon,” political analyst Caroline Glick urged Bennett’s address to the UN did not go nearly far enough.

“The great threat to Israel these days from Iran is reflected in the unwillingness of the US administration to do anything active to prevent Iran from crossing the last line towards independent nuclear capability. Instead of dealing with it in a real way, that is, militarily, the US administration is doing everything to resume the nuclear talks with the Iranians, which will lead to American and UN legitimacy for an Iranian nuclear arsenal,” Glick explained in an interview with Arutz Sheva. “Naftali did not say anything about it. He did not condemn, not even a little bit, the dangerous nuclear agreement. On the contrary, his defense minister said that Israel was fine with the American talks leading up to the nuclear agreement.”

Glick’s comments were in reference to defense Minister Benny Gantz earlier this month, stating in an interview with Foreign Policy that he would “accept” the “current US approach of putting the Iran nuclear program back in a box” through the JCPOA.

Gantz’s remarks and the soft stance by PM Bennet were met with condemnation from former Prime Minister Benjamin Netanyahu, who called the move a “dangerous mistake.”

“In practice, the policy of no longer opposing a US return to a nuclear deal paves the way for Iran to become a rich nuclear power because all economic sanctions will be lifted and the Iranian plan will also receive a UN seal even though it was developed illegally,” Glick maintained.

“Lapid and Gantz said about a month and a half ago that within 70 days Iran will pass the point of no return, so what are they waiting for? Where is the defense of Israel? Where is the move to prevent Iran from acquiring nuclear weapons?” she asked. “In the previous government every Monday and Thursday there were moves on nuclear facilities in Iran, and in this government nothing happens because we do not want to surprise the Americans. It gives the United States a veto right over our activities.”

Biden in his address to UNGA stated that, “The United States remains committed to preventing Iran from gaining a nuclear weapon. We are working with the P5+1 to engage Iran diplomatically and seek a return to the JCPOA. We’re prepared to return to full compliance if Iran does the same.”

French Foreign Minister Jean-Yves Le Drian, in a prerecorded message to the UN told the General Assembly, “Iran cannot be allowed to think any longer that time is on its side because the more dangerous its nuclear program becomes, the greater the risk of a major crisis. France will do everything it possibly can to encourage dialogue, but the only possible way forward remains an agreement, making it possible to establish that Iran is once again upholding its obligations.  It is therefore essential that negotiations resume very quickly.”

Reports released earlier this month indicated the world’s largest state sponsor of terrorism will have enough uranium to create a nuclear bomb in less than one month, underscoring the urgency needed to stop Iran.

On Tuesday, Iran rejected requests from the UN and EU to allow inspectors from the nuclear watchdog group IAEA to enter one of their nuclear sites. The facility was reported to be damaged in June by what Iran has called an act of sabotage by Israel in which cameras from the site were destroyed.

“Countries that did not condemn terrorist acts against Iran’s nuclear site are not qualified to comment on inspections there,” the Islamic Republic said in response.

“We are deeply troubled by Iran’s refusal to provide the IAEA with the needed access to service its monitoring equipment, as was agreed in the Sept. 12 Joint Statement between the IAEA and Iran,” the United States said in a statement.

This development also comes as Norway has charged a German-Iranian professor with violating sanctions against Iran.

The professor was accused of inviting guest researchers from the Islamic Republic to the Norwegian technical university, providing them access to a laboratory.

The prosecutor urged that the visiting researchers had access to “knowledge that could be useful to Iran’s nuclear program.” Adding, “the potential danger” of what took place is very “serious.”

Despite the mounting tensions, Iran has not slowed its bullying in the Middle East.

Most recently, the Islamic Revolutionary Guard Corps and Iranian army conducted “military drills” along the border with Azerbaijan sparking condemnation by the countries President.

“Every country can carry out any military drill on its own territory. It’s their sovereign right. But why now, and why on our border?” he stated Monday.

In response to the criticism, Iran stated that it “will take all measures it judges necessary for its national security,” adding that “Iran will not tolerate the presence of the Zionist regime near our borders.”

The reference to a “zionist” presence may be in regards to Azerbaijan’s relationship with Israel. However, some are speculating the Iranians are fearing a strike from Israel coming in that direction.

What Does The Bible Say?

Amir Tsarfati of Behold Israel stated via Telegram that “By the end of this year, the world will see either a nuclear Iran or a strike on Iran. No deal will stop them at this point. Buckle up your seatbelt in preparation for a very stormy end of 2021.”

“The Middle East is reaching a boiling point,” he added.

Talk of significant military action taken by Israel against Iran has those familiar with Bible Prophecy watching very closely. In Isaiah 17, the Bible speaks of a future event in which Damascus, the capital of Syria, will be completely destroyed.

Israel has conducted multiple strikes on Iranian targets in Syria, as the Islamic Republic has moved weaponry to attack the Jewish state throughout the region including in Damascus.

Although we are not told in Scripture how Damascus, one of the longest continually inhabited cities in the world, will become a “ruinous heap.” The increasing tensions between Israel and Iran in the region have many keeping a close eye on the city.