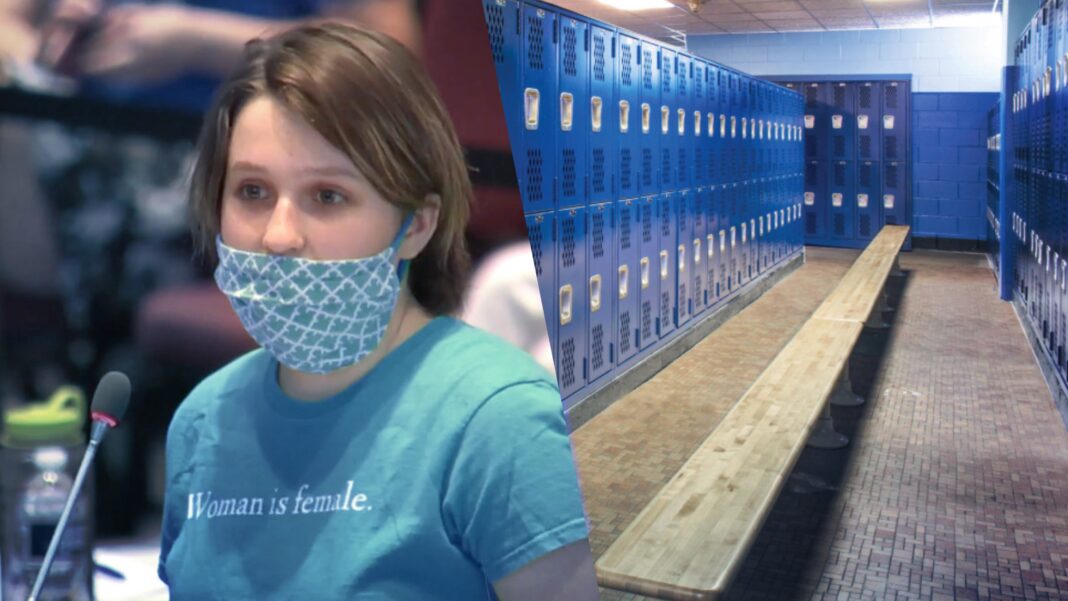 Fourteen-year-old Jolene Grover went to a school board meeting wearing a “Woman is Female” t-shirt to call out her district for prioritizing “boys’ wants over girls’ needs” in its new transgender policies. The eighth-grader joins teachers and parents in fighting Loudoun County, Virginia’s proposed policies that would allow students to use whichever locker room corresponds with their self-described gender identity rather than their biological sex.

During her speech at a school board meeting, Grover argued the new policies are “dangerous and rooted in sexism” and could lead to harassment or assault, exclaiming, “You do this in the name of inclusivity while ignoring the girls who will pay the price.” She further noted the existing harassment and bad behavior by junior high boys, telling the board, “Now, boys are reading erotica in the classroom next to girls, and you want to give them access to girls’ locker rooms.”

“Two years ago, I was told policy 1040 was just an umbrella philosophy and you weren’t going to allow boys into the girls’ locker rooms,” Grover said of the proposed change. “But here you are doing just that.”

“Everyone knows what a boy is — even you,” Grover continued, pushing back against the idea that identity is ever-changing. “When woke kids ask me if I was a lesbian or a trans boy because I cut my hair short, it should tell you these modern identities are superficial.”

Last year, due to potentially harmful policies considered in the school district, Grover’s concerned mother took her out of the Loudoun County public school system and has been homeschooling her. Grover joins many Loudoun County residents standing against the school district’s radical proposed policies in the aftermath of gym teacher Tanner Cross’s suspension and reinstatement for his stated refusal to “lie to students” about whether boys can be girls.

As policies regarding trans students in opposite gender locker rooms continue to be pushed forward, the rightful objections by young ladies and parents are entirely ignored.

Back in 2019, we reported of one girl, Julia Burca, who was moved to tears when her school board in Illinois voted to disregard female privacy in favor of political ideology.

“I feel uncomfortable that my privacy is being invaded,” she said.

Julia’s voice shook as she fought back her tears, “I am a swimmer. I do change multiple times naked in front of the other students in the locker room. I understand that the board has an obligation to all students, but I was hoping that they would go about this in a different way that would also accommodate students such as myself.”

Matt Walsh, a writer for the Daily Wire, wrote about what happened with Julia’s school board, calling it “simply evil”:

This is not a complicated issue. This is a black-and-white, right versus wrong, good versus bad, issue…

One side is demanding that the whole system be reworked for their sake, and that the privacy of every girl in the school be abolished in the process. The other side is not trying to impose anything on anyone, is not asking for any special accommodation of any kind, is not asking for anything unreasonable, is not even demanding that gender-confused boys get changed with other boys. They could use private stalls. They could work out any other arrangement they want. All this side asks is that their private areas — the areas where they are in the most vulnerable and exposed state — remain private. There is no contest here. The scales are tipped 100% in favor of the girls.

At the very least, if you support forcing scared and humiliated young girls to change in front of boys, please do not pretend to care about women’s rights, especially women’s privacy rights. And please do not ever sermonize about the dangers of “rape culture” or “patriarchy.” You are willing to put a girl’s safety at risk and expose her to the shame and embarrassment of changing in front of boys all for the sake of the LGBT agenda. You are an enemy of women, not a supporter. At least be honest about it.

We completely agree with Walsh: This is a matter of good versus evil. This is what happens when society calls “good evil and evil good.” As the Bible records in Isaiah 5:20, God says “Woe” unto those who put “darkness for light and light for darkness.”

Life Site News in their article, “Transgender bathrooms causing plague of girls afraid to use toilets at school,” reported:

“It is awful enough that so many children are being confused by the gender-fluid ideology introduced to them in schools, and that so many of them are beginning to believe that they were born into the wrong bodies,” they wrote. “But now, it is often children who are being hurt and disturbed by the new social experiment that adults are imposing on them who are forced to push back against this lightning-fast social trend.”

“Delusional adults may have entirely forgotten the natural order of things, but children live with the reality of the world as it is, not as a handful of incredibly powerful and influential activists wish it to be,” Life Site continued. “As always, it is the guinea pigs who are so often damaged and destroyed by the experiment.”

God created mankind in His image. He created us to be male and female (Genesis 1:27). This is also confirmed by science. When schools adopt these dangerous policies, which are tantamount to child abuse, they demonstrate that they have wholeheartedly rejected God and are setting your children up to do the same.