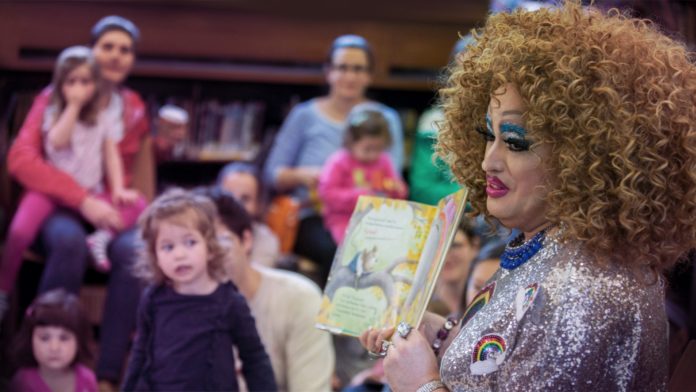 ABC affiliate KABC News reported “Pickle” has been with the drag queen program for over two years.

“We’re really trying to get kids excited about books and excited about books that explore progressive themes, and allow children to see that you can be whoever you want any day of the week,” he said. “A lot of the core values of being a drag queen – love, acceptance, joy, laughter, self-expression – are values that we want to instill in our kids.”

According to the Drag Queen Story Hour website, the aim of the event is to present gender fluidity as a positive quality children should accept and even emulate:

“Drag Queen Story Hour captures the imagination and play of the gender fluidity in childhood and gives kids glamorous, positive, and unabashedly queer role models. In spaces like this, kids are able to see people who defy rigid gender restrictions and imagine a world where people can present as they wish, and where dress-up is real.”

“Pickle” said being a drag queen is “a lot of fun – it’s so great to engage with the kids!”

Another drag queen admitted the story hours for young children are not just about fun and literacy.

In 2018, Dylan Pontiff, a gay man who uses the name Santana Pilar Andrews when dressed in drag, helped organize a story hour for Louisiana preschoolers. He said the event’s purpose is “the grooming of the next generation.”

“Pickle” admitted the drag queen event is targeting preschoolers on a psychological level.

“They see me as this larger than life character, but I think on a subconscious level, it’s opening up their ability to empathize with other people,” he said.

“We see new families come into the library for the first time because they’re excited to bring their kids,” she said.

The Drag Queen Story Hour is far more controversial than many librarians will admit.

The American Library Association (ALA) encourages the program for its social engineering purpose and is supporting those libraries experiencing “pushback” from their communities.

“ALA, through its actions and those of its members, is instrumental in creating a more equitable, diverse, and inclusive society,” the organization states. “This includes a commitment to combating marginalization and underrepresentation within the communities served by libraries through increased understanding of the effects of historical exclusion.”

The events have grown contentious in cities throughout the country, such as Chula Vista, California, where Councilmember Steve Padilla, an LGBT-activist city official, said parents and family groups protesting the event were people who hold “white supremacist beliefs.”

After the pastor of the South Bay Pentecostal Church openly criticized the Chula Vista library’s decision to host the drag queen event, his church was vandalized.

Executive Pastor Amado Huizar said Drag Queen Story Hour is not appropriate for young children and should not be funded by taxpayer dollars.

“If the people want to make that happen, do it at a private setting, at a book store or at a home, but not at the Chula Vista Public Library,” Huizar said.

Concerns about safety at the drag queen events made headlines recently when pro-family group Houston MassResistance discovered drag queen Alberto Garza, who uses the name Tatiana Mala-Nina when reading to young children, had been convicted in 2008 of sexually assaulting an eight-year-old boy. The Houston library system had failed to perform a background check on Garza or any of the other drag queens appearing in its programs.

Multnomah County Library in Portland, Oregon, also faced backlash when it was found the library system had quietly removed from social media photos of the Drag Queen Story Hour that took place at one of its libraries, during which young children were lying on top of the drag queens and fondling their false breasts.

Some drag queens have used the story hour event to mock Christianity.

The men call themselves “queer nuns,” even though the anti-Catholic group is openly devoted to promiscuity. Their slogan is a ridicule of Jesus’ words to the woman caught in sexual sin. Instead of “Go, and sin no more,” the men “queers” have created their trademark slogan as, “Go forth and sin some more!”

“The goal is to normalize abnormal, sexually deviant homosexual behavior by enticing children to first: question their sexuality,” profamily activist Georgia Kijesky told LifeSiteNews recently. “The more children see men dressing up as women, the more normal it will become.”