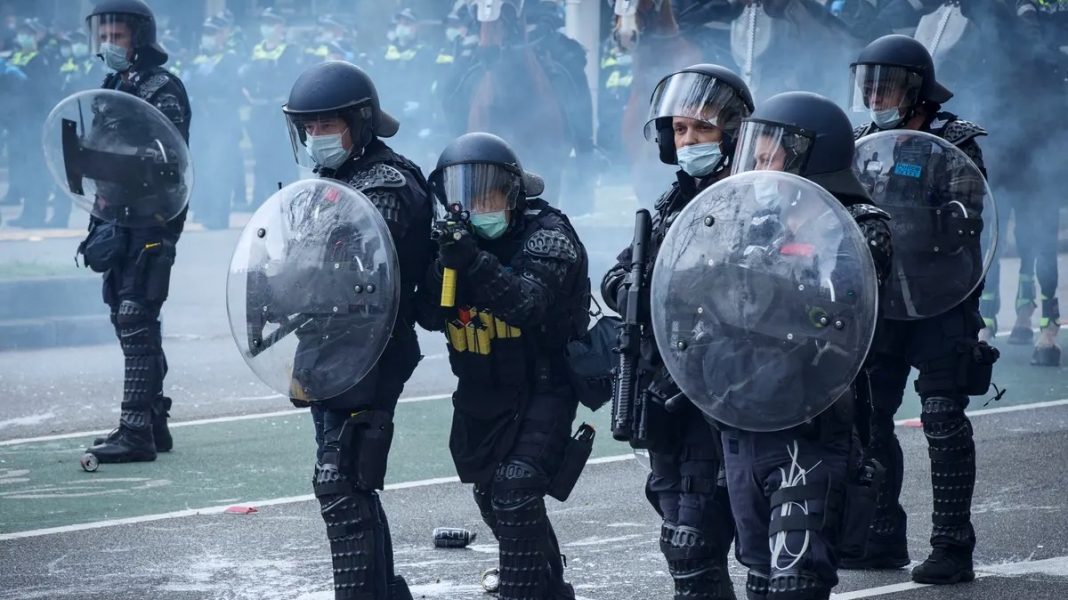 Gov. Ron DeSantis, R-Fla., questioned Tuesday if the United States should rethink its diplomatic relationship with Australia given its strict, military-enforced COVID-19 lockdowns.

“And who knows where we would be right now?” he asked.

“You say, like, ‘It can’t happen here,'” DeSantis continued. “You know, you guys, look what’s going on in Australia right now. You know, they’re enforcing, after a year and a half, they’re still enforcing lockdowns by the military.”

“That’s not a free country. It’s not a free country at all. In fact, I mean, I wonder why we would still have the same diplomatic relations when they’re doing that. Is Australia freer than China, communist China, right now? I don’t know. The fact that that’s even a question tells you something has gone dramatically off the rails with some of this stuff.”

Many videos have gone viral in recent weeks depicting large protests in Sydney and Melbourne against lockdowns in the country, as well as instances of police cracking down on individual offenders.

Authorities are utilizing an app that combines facial recognition and geolocation to enforce quarantine rules in South Australia, according to The Atlantic.

Along with strict enforcement of harsh lockdown measures by the county’s military, Australia has also continued to use fear tactics to pressure the unvaccinated. The Premier of New South Wales, warned Tuesday, that those who resist vaccination will “face social isolation and a difficult life,” Breitbart reported:

“A lot of businesses have said they will not accept anyone who is unvaccinated,” Berejiklian told Seven News on Tuesday. “Life for the unvaccinated will be very difficult indefinitely.”

Syndey has promised to ease lockdown measures on vaccinated residents between October 11 and December 1.

Berejiklian’s warning that unvaccinated people will face social isolation and a difficult life comes as the Australian government has strictly enforced its coronavirus policies, to the point of police arresting people on the street for not wearing a mask as several viral videos have shown.

Australian Health Officials were raising eyebrows earlier this month when they openly began stating that their country and others would need to adapt to the “new world order.”

In response to a question about reopening Australia from lockdown measures, New South Wales (NSW) Chief Health Officer, Dr. Kerry Chant, stated, “We will be looking at what contact tracing looks like in the New World Order.“

Pastor Jack Hibbs of Calvary Chapel Chino Hills, regarding the terrifying scenes in Australia, wrote, “If you don’t think these are the Days Jesus warned about then what’s your explanation for this global madness? This one thing I know for sure. I will never be going to Australia.”

Hibbs further shared a video originally published by Ben Shapiro showing footage of the military-controlled lockdowns in Australia (Warning some may find the video content disturbing):

Journalist Leo Hohmann, in a recent article, explained that the push for 100% vaccination rates is setting the stage for future events discussed in Biblical Prophecy:

“The Bible says that in the end times a system, global in scope, will arise and deceive many,” Hohmann described. “That system will demand that every human being on the planet, rich and poor, slave and free, take its ‘mark,’ either in their right hand or their forehead, and this mark will be required in order to buy, sell or conduct commerce of any kind.”

Hohmann went on to say that although the vaccines we are seeing being pushed on society today are not the mark of the beast spoken of in Revelation 13, “they appear to be an important precursor.”

“The digital vaccine passports being rolled out worldwide represent an even bigger leap, in my opinion, toward the mark. But one can see how all of these seemingly isolated steps are tied together in a chain that inevitably leads to the mark,” he warned.

In Australia and the rest of the world, we have seen an increased use of fear tactics to control citizens. Earlier with year, a Canadian doctor scolded Health Officials for exaggerating the severity of COVID to “induce more fear and thereby compliance in the name of promised safety.”

Through Scripture, Christians should remain fearless of both the virus and the freedom destroying lockdowns and overreach that have accompanied it.

The Bible states that God has “not given us the spirit of fear; but of power, and of love, and of a sound mind” (2 Timothy 1:7).

There is another reason Christians should not be gripped with fear, despite all that we are seeing take place… our Blessed Hope (Titus 2:13). Luke 21:28 says that when we see the things Jesus predicted would happen in the end-times begin to happen, we should “look up, and lift up your heads; for your redemption draweth nigh.”

David Fiorazo summed it up perfectly when he said, “Circumstances always change. God and His promises are eternal. He offers true peace and stability to those who look up and wait for our blessed hope and the appearing of our great God and Savior, Jesus Christ.”