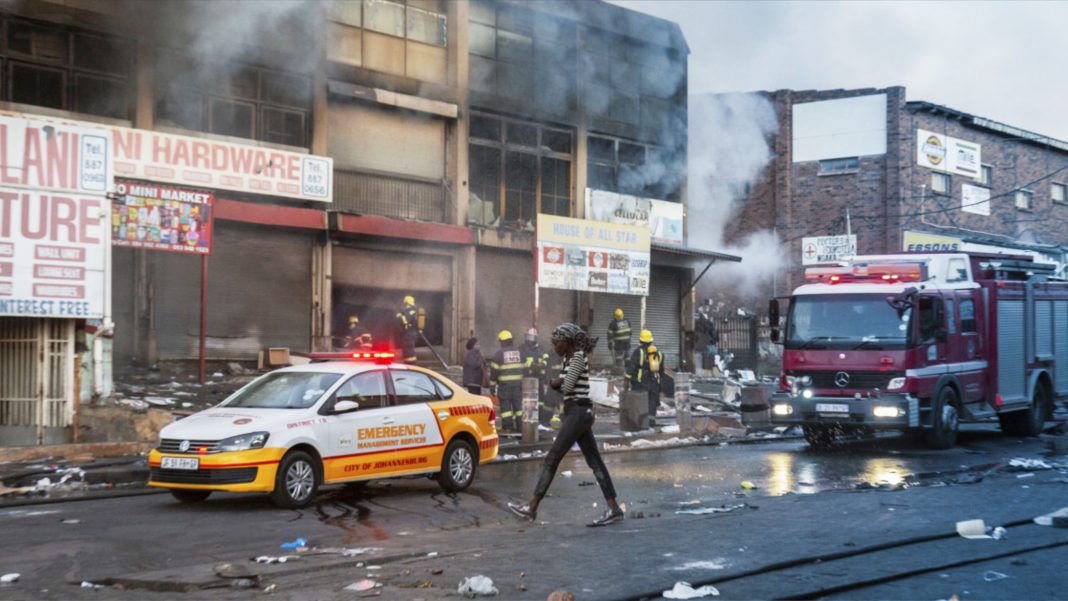 Crowds clashed with police and ransacked or burned shopping malls in South Africa on Tuesday, with dozens reported killed as grievances unleashed by the jailing of former president Jacob Zuma boiled over into the worst violence in years.

Soldiers were deployed on to the streets as outnumbered police seemed helpless to prevent attacks on businesses in Zuma’s home province KwaZulu-Natal and in Gauteng province, where the country’s biggest city, Johannesburg, is located.

“No amount of unhappiness or personal circumstances from our people gives the right to anyone to loot, vandalise and do as they please and break the law,” Police Minister Bheki Cele told a news conference, echoing sentiments expressed by President Cyril Ramaphosa overnight.

The bodies of 10 people were found on Monday evening after a stampede at a shopping centre in Soweto. The police told AFP Tuesday that the official death toll had climbed to 72, but state and provincial authorities say that at least 45 people have been killed in the unrest, which broke out last week when Zuma handed himself over to authorities.

The protests have been fuelled further by frustration over poverty, inequality and the economic impact of COVID-19 restrictions.

More than 750 people have been arrested, while shops, petrol stations and government buildings have been forced to close.

Hundreds of looters raided warehouses and supermarkets in Durban, one of the busiest shipping terminals on the African continent and a major import-export hub.

Outside a Durban warehouse of retailer Game, Reuters filmed looters stuffing cars with electronic goods and clothes. Inside, the floor was a wreckage of discarded packaging as the crowd systematically emptied the shelves.

“What we are witnessing now are opportunistic acts of criminality, with groups of people instigating chaos merely as a cover for looting and theft,” President Cyril Ramaphosa said in an address on Monday night.

Zuma, 79, was sentenced last month for defying a constitutional court order to give evidence at an inquiry investigating high-level corruption during his nine years in office until 2018.

The decision to jail him resulted from legal proceedings seen as a test of post-apartheid South Africa’s ability to enforce the rule of law, including against powerful politicians.

But any confrontation with soldiers risks fuelling charges by Zuma and his supporters that they are victims of a politically motivated crackdown by Ramaphosa, his successor.

The violence worsened as Zuma challenged his 15-month jail term in South Africa’s top court on Monday. Judgement was reserved until an unspecified date.

Four of the confirmed dead were in Gauteng, the national intelligence body NatJOINTS, said, and 26 in KwaZulu-Natal, the province’s premiere said.

The unrest broke out as South Africa’s economy struggles to emerge from the damage wrought by COVID-19, forcing it to repeatedly impose restrictions on businesses that have hurt an already fragile recovery.

The crisis may have widened the gulf between haves and the have-nots. Growing joblessness has left people ever more desperate. Unemployment rose to a new record high of 32.6% in the first quarter this year.

The National Prosecuting Authority said on Monday that those found guilty of looting would be punished.

Pray for South Africa! As former President Jacob Zuma, a corrupt and a known anti semite was jailed, his supporters began to literally “burn down the country”. Needless to say who the first targets are. Wars, chaos and leadership crisis is afflicting many parts of the world in preparation for rise of the antichrist.

Lawlessness is reining in the land, whether it be rioting in the streets or blatant corruption by governments.

However, as bad as it is, what we are currently seeing is only a trickle compared to the hurricane that will come about in the future when the “lawless one,” the antichrist, is in power on the earth (2 Thess. 2:3, Rev. 13:16-19). The moral climate of the earth today is merely altering itself into the image of the false savior they will soon accept.

Hal Lindsey, in his article “Lawlessness Spreading Across the Land,” revealed why this rampant violence, which the Bible says would characterize the last days before the return of Christ, seems to be describing our day:

The Bible foretold that the time near the return of Christ would be marked by lawlessness. In Luke 17:26-30, Jesus compared those days to the times of Noah and Lot. Genesis 6:11 tells us that in the time of Noah, “The earth was corrupt in the sight of God, and the earth was filled with violence.”

That sounds like today-rampant violence and corruption. Lot lived in a time and place of violent mobs. In both stories, we see that people lacked empathy, and thought mostly of themselves and their pleasures. Several places in the Bible warn us that the end times will be times of “lawlessness.” That, along with so many other signs, seems to be describing our day.

Jesus in His response gave a detailed description of the condition of the world and what it will look like in the last days. Wars and rumours of wars, nation rising against nation, famines, pestilences, earthquakes, these being the beginning of sorrows.