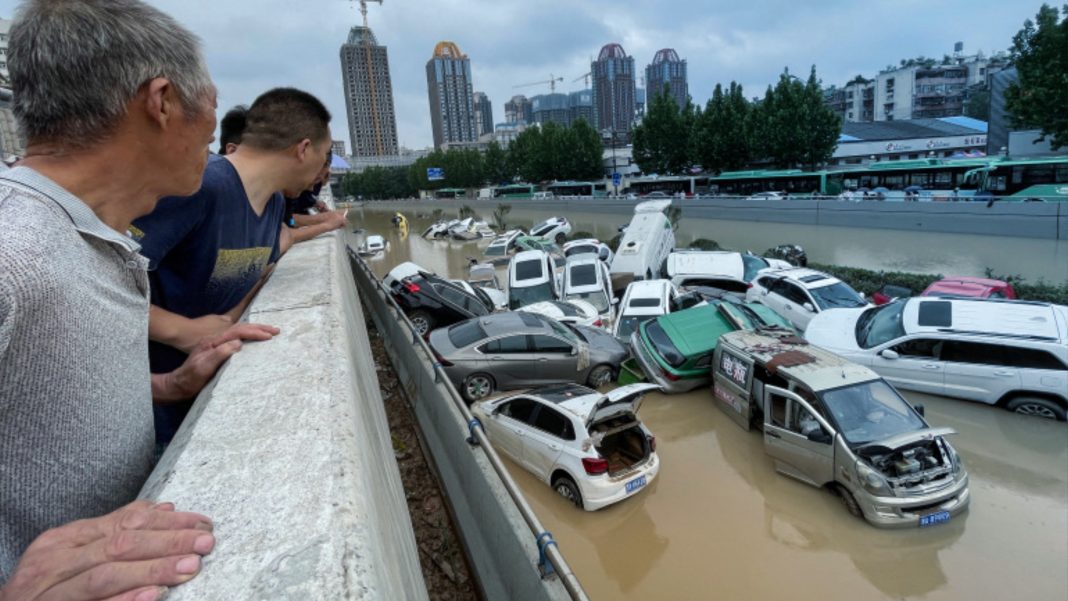 Heavy rains are flooding cities in central China, leading to rising casualties and widespread destruction of property. Information about the disaster is increasingly difficult to come by, as the Chinese Communist Party (CCP) ramps up censorship of any content that it deems contains “negative energy.”

By July 22, the Chinese regime announced that 33 people have died from the flooding, with eight missing. But videos recorded by locals suggest much a higher figure. Chinese netizens, meanwhile, have taken to social media demanding the regime reveal the true death toll.

During recent rescue efforts, bodies were found in a submerged tunnel of the worst-hit city thus far, Zhengzhou, on July 22. Zhengzhou is home to over 12 million people, and the capital of central China’s Henan Province.

While locals demand transparency, the regime has been busying itself promoting so-called positive energy propaganda programs. Such content includes those praising party officials, the military, and rescue efforts. In turn, online censors have swooped in to quickly remove any content deemed to carry “negative energy,” such as footage captured by locals documenting the destruction and calling for official accountability.

In the past few days, videos of the devastation have proliferated on Chinese social media, prompting quick action by censors.

Videos showed that hundreds of cars were trapped inside a highway tunnel in Zhengzhou that was submerged in floodwater. Some drivers and passengers’ bodies still sat inside the vehicles.

Five minutes was all it took for the tunnel to be inundated, according to those who survived on July 20. Water reached nearly 20 feet deep (six meters) in the 2.6 mile (4.3 km) long tunnel.  “The water rose so fast. The chance of surviving was only ten percent!” said a female driver, surnamed Yang, according to the private Chinese media platform Toutiao.

While rescuers eventually drained the highway tunnel, thousands of Zhengzhou residents crowded around and filmed the process. However, as submerged cars began to peek through the murky water, police drove onlookers away and blocked the nearby roads.

Videos were shot from the buildings, capturing rescuers removing bodies from the tunnel.

In other video clips circulated on social media on Thursday, cries of “It’s horrible to see,” “I’m shocked to watch this happen,” “completely terrible,” accompanied gruesome imagery of the flood’s devastation.

Yet such mournful wailing has been marked by censors as carrying “negative energy” and scrubbed. Other content about people’s helplessness, distress, and suffering, along with public calls for transparency about the disaster received the same treatment.

A staff member of the state-run Zhengzhou metro company posted online an account of the cause of metro trains being trapped in floodwaters on July 21. The incident caused 12 deaths, according to the regime.

The employee said the design of the metro system allowed it to operate safely, but the company managers didn’t want to take responsibility. They also didn’t stop the metro’s operation earlier when the risk of flooding became apparent, the staff member said.

Around 500 passengers ended up trapped in the flooded trains. Many took videos and shared them online, pleading for help.

This content was quickly circulated on Chinese social media platforms, but all were removed hours later.

Meanwhile, Chinese state-run media hasn’t reported any news involving death. Their message, instead, has been that the CCP has led the Chinese people to conquer the flood.

In times of emergencies, the promotion of news extolling the regime’s leadership and suppression of anything that may make Beijing look bad is a worn-worn tactic of the CCP, according to Tang Jingyuan, U.S.-based China affairs commentator.

“When a disaster happens, the regime won’t allow any voice to report the true scale. It always reports how many rescue efforts the regime has carried out, and then claims that it leads Chinese people to conquer a disaster again,” Tang told The Epoch Times on July 22.

The CCP’s propaganda efforts were in full swing amid this disaster.

The Chinese regime announced after the floods that the recent heavy rain in Zhengzhou was a once-in-a-millennia event. However, Zhengzhou experienced much heavier flooding less than 50 years ago in August 1975. Areas of Henan province experienced as much as four times the amount of rain in a two-day period back then compared to this year’s volume, according to the Chinese Meteorological Administration. Moreover, China only began keeping official records of rainfall in 1951.

The reporting blackout extended to national state-run outlets. From July 20 to 22, the CCP’s official mouthpiece People’s Daily didn’t feature anything about the Zhengzhou floods on its front page. State-run broadcaster CCTV broke the silence on July 21, to mention that rescue efforts were underway.

In 2 Timothy chapter 3, the apostle Paul provided a list of what the world will be like in the time prior to Jesus’ return. Among this list, the Bible states that “men of corrupt minds” would “resist the truth.”

This is not the only place in the Scripture that outlines these times. In Luke 21, we read, among other things, that the nations will be in a state of “distress.” Although these things are going to be greatly exacerbated during the seven-year “tribulation” (from which the church is absent), we can clearly see that in the lead-up to these times these listed characteristics are only increasing.